Local police take lead in many areas of Baghdad 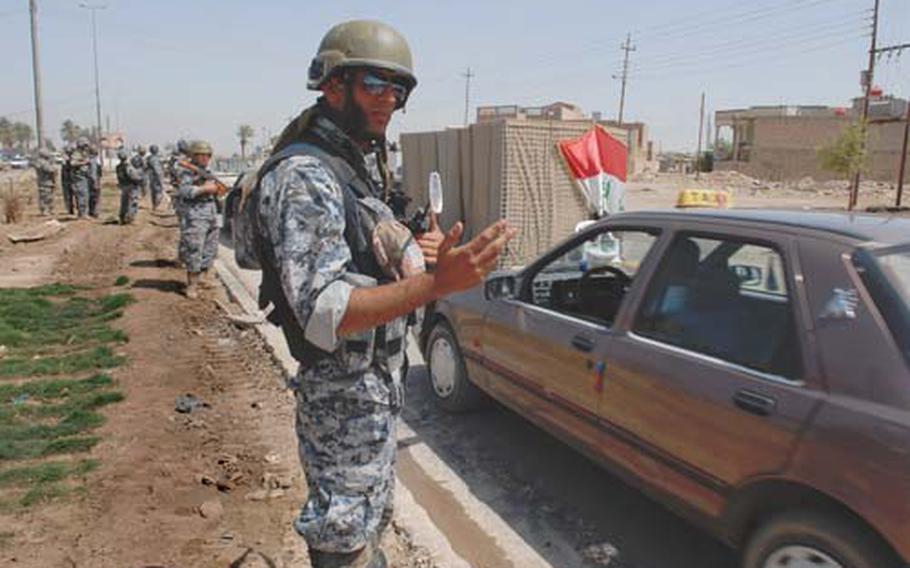 BAGHDAD &#8212; Take a stroll through the Salhiya neighborhood and you&#8217;ll see a lot more blue than brown.

That&#8217;s because, unlike in most parts of Baghdad, Salhiya police are responsible for providing security instead of the Iraqi army.

Local police took charge of security in the neighborhood this summer, making them responsible for about a quarter of Baghdad&#8217;s Karkh district. Meanwhile, other police forces, such as the Emergency Response Unit, provide primary security in neighboring Kindi and Qadisiyah. In all, police have responsibility for about nine residential muhallas, or neighborhoods, just outside Baghdad&#8217;s Green Zone.

The assumption of police authority in this part of Baghdad is both a sign of progress and a key component of further success. The Iraqi police have long been the most disparaged of Iraqi security forces &#8212; partly because of poor, disloyal performance and partly because they&#8217;ve often been thrust into a paramilitary role more suited for other forces.

Their ability to take on responsibility for securing Karkh suggests growing competence on their part and an improved security situation that allows the Iraqi army to back off.

An effective police presence also creates its own successes. Police training focuses on working with the community, whereas military forces must spend much of their time learning combat skills. Police are often more adept at the investigative skills that allow them to uncover and dismantle insurgent networks. They also tend to be from the neighborhoods they secure, which establishes trust and can give them greater access to sources.

Salhiya was chosen as the first site for police to take over because it is a high-profile center of commerce through which many government workers travel each day, Jassim said. Karkh&#8217;s security situation was also buoyed by its proximity to the Green Zone, the most secure chunk of the capital.

"It&#8217;s important to have the police in the street so people see the success," he said. "If they succeed, that will give a good impression of the police so they can extend it to other area."

The Iraqi army hasn&#8217;t cut the police loose completely, said Maj. Hussein Athah Salman, commander of 1st Battalion, 22nd Brigade, 6th Iraqi Army Division. They still do a single patrol through Salhiya every day and get together twice a month for a security conference. Salman, whose unit used to control Salhiya, said the police are doing better than before but still need to be checked on.

"They&#8217;re kind of doing a good job," he said. "This is going to give the Iraqi police the ability to grow the trust of the civilians."

Jassim concedes that the police aren&#8217;t perfect and that they still need coalition forces and the Iraqi army, but noted that everyone has things they can work on.

American forces are helping them with that. The 4th Battalion, 42nd Artillery Regiment &#8212; the American unit in charge of Karkh &#8212; ran police training courses from May through the fall, said Lt. Col. Robert Kirby, the 4/42 commander. When the courses ended, the Iraqis had a trained cadre who could teach other police the necessary skills. Meanwhile, police transition teams continue to work with the police.

The Iraqi government plans to gradually extend police control over the city as forces in other areas grow in capability. Jassim specifically wants to ensure that local police have self-sufficient intelligence and administrative capabilities before they start working on their own. For now, Jassim is proud of the role that police have played in ensuring that Karkh stays safe.

"Know that Karkh is the birthplace of al-Qaida in Iraq," he said. "Al-Qaeda in Iraq from all over the world used to operate here. Now Karkh is quieter than Rusafa (in eastern Baghdad)."