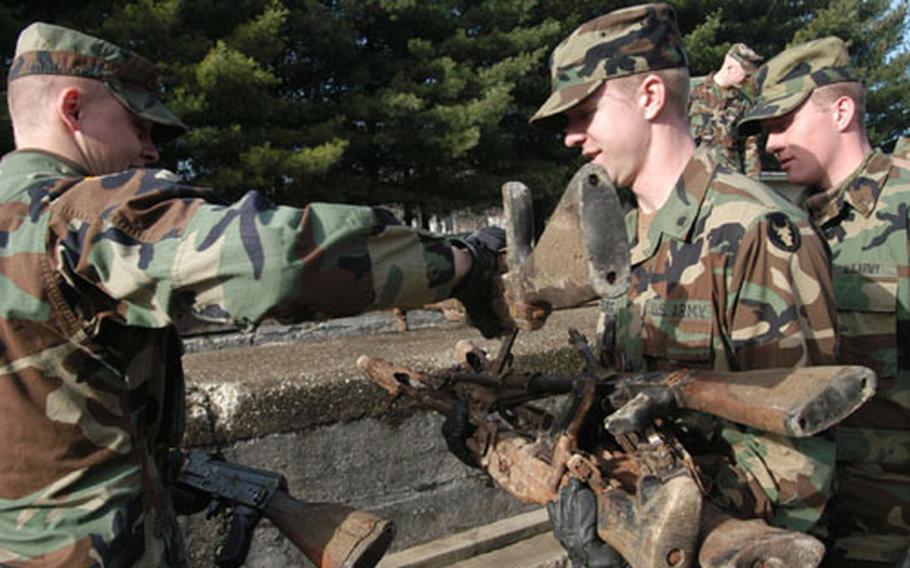 American soldiers collect the crushed weapons from the line so they could lay down more to be crushed by a tank. The crushing on Tuesday marked the end of a successful three-day weapons turn-in campaign in three communities in northeastern Bosnia during which local police and military joined the American troops. (Ivana Avramovic / S&S)

BIJELJINA, Bosnia and Herzegovina &#8212; For years, Stabilization Forces have been collecting weapons and ammunitions from Bosnia.

Yet each voluntary weapons turn-in program still manages to yield a healthy harvest.

The latest turn-in program, held this week, lasted three days and covered three communities in northeast Bosnia. But this time was different.

&#8220;The big thing that changed this time ... was a deliberate effort throughout SFOR to allow the local communities and the local leaders to take the lead,&#8221; said 1st Lt. Steve Grandgenett of Company B of Task Force Iron, which coordinated the effort between SFOR and the local police and military.

During door-to-door visits in Medasi, Janja and Brodac, the local police and military stepped forward to ask people if they had weapons to turn in, while Stabilization Force soldiers stayed in the background.

It was a sign of things to come, according to Grandgenett. The lieutenant said local forces could take over the collection process, &#8220;very, very soon.&#8221;

The weapons collectors got an excellent response, not only in the targeted communities but also from some people in surrounding towns who heard about troops coming around.

In the past, SFOR soldiers made the door-to-door rounds with members of the local police. But the local military&#8217;s involvement contributed to the operation&#8217;s success, said Maj. Dusko Matic, assistant commander for civil military affairs of 310th Mechanized Brigade of the Serb-run Republika Srpska military.

The last harvest also achieved excellent results, in part, because raffle tickets were given out for the weapons and ammunitions turned in. The grand prize was a new car.

Still, soldiers said that the success this week was just as good, without the gimmick.

Harvest by the numbers

These are the numbers of what was collected during the three-day Operation Harvest conducted by Task Force Iron and local police and military: