Local police beef up base security ahead of Obama visit 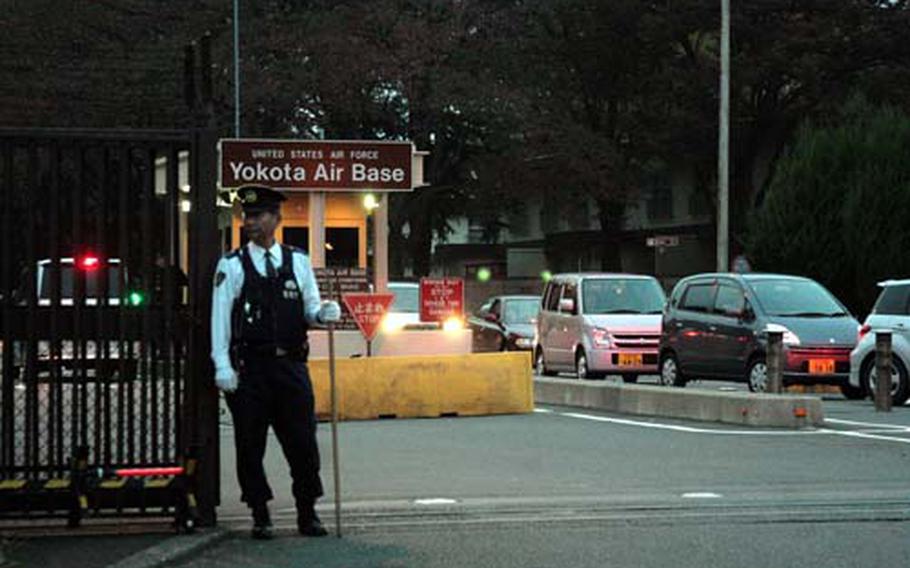 A Japanese police officer stands guard Tuesday evening outside Yokota Air Base, Japan. About 16,000 officers from the Japanese National Police Agency have been stationed at U.S. bases around Japan and other locations as part of a security detail in preparation for the arrival of U.S. President Barack Obama in Japan on Friday. (Charlie Reed / S&S)

YOKOTA AIR BASE, Japan &#8212; Japanese police are swarming U.S. military bases in Japan ahead of the arrival of President Barack Obama in Tokyo on Friday.

The Japanese National Police and coast guard are augmenting American security forces at all bases in mainland Japan and Okinawa, according to a statement from U.S. Forces Japan.

About 16,000 officers from the National Police Agency have been assigned to the security detail for the president&#8217;s two-day visit and for the 20th anniversary of the reign of Emperor Akihito on Thursday, a police spokeswoman said Tuesday.

While some officers are working on the bases, others have set up checkpoints just outside the bases to monitor vehicle and pedestrian traffic for suspicious activity. Force Protection Condition Bravo was implemented Tuesday at all U.S. bases in mainland Japan and Okinawa, military officials said. It is the second lowest of a four-level threat scale applied daily at all military installations.

At Yokota, just 25 miles from downtown Tokyo where Obama will meet with Prime Minister Yukio Hatoyama, police could be seen outside the perimeter of the base near the airfield Tuesday. Shipments of equipment and supplies associated with the presidential entourage have been arriving at the base, although it is unclear whether Obama will fly into Yokota or a commercial airport, Yokota spokesman Maj. Christopher Watt said.

After meeting Friday with Hatoyama, Obama is expected to give a speech Saturday at Suntory Hall near the U.S. Embassy in Tokyo and meet with Emperor Akihito before leaving for Singapore on his Pacific tour.

The Japanese press has been flush with news about Obama&#8217;s visit to Japan, his first since taking office.

The Japanese are generally more receptive to the &#8220;diplomatically inclined&#8221; Obama, said Kyle Cleveland, a sociology professor at Temple University&#8217;s campus in Tokyo, versus former President George W. Bush, whose &#8220;militaristic&#8221; policies often were not well-received in Japan.

Still, Obama&#8217;s seeming popularity in Japan is less about foreign policy than it is about pop culture, Cleveland said.