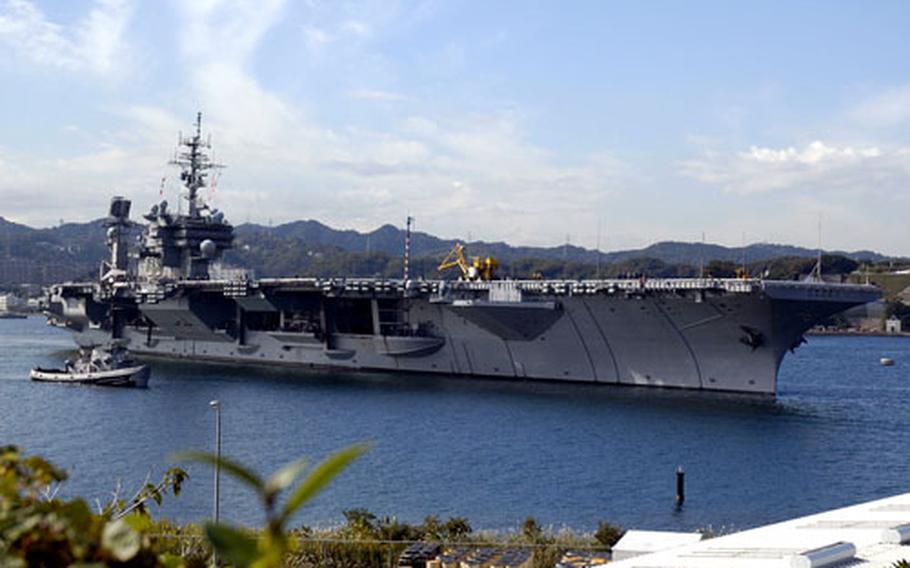 The USS Kitty Hawk steams away from the pier at Yokosuka Naval Base, Japan, to begin its fall underway period. (Tony Peters / U.S. Navy)

Citing safety fears, communities outside Yokosuka Naval Base expressed dismay Friday upon hearing the U.S. Navy will be replacing the fossil-fuel-powered USS Kitty Hawk in 2008 with an aircraft carrier fueled by nuclear energy.

&#8220;The fact that Japan is the only country to have ever experienced nuclear bombings, adverse reaction to nuclear power is great among the people,&#8221; said Kanagawa prefecture&#8217;s Gov. Shigefumi Matsuzawa, whose prefecture includes the base. &#8220;It poses great risk because it will be placed in a densely populated area.&#8221;

On the national level, however, Japanese Foreign Minister Nobutaka Machimura said he welcomed the decision and supports the U.S. Navy&#8217;s role in the region.

&#8220;We have determined that safety has been ensured when American nuclear warships visited Japan,&#8221; he said.

Nevertheless, Yokosuka Mayor Ryoichi Kabaya said in a statement Friday that he will ask the foreign ministry to oppose having a nuclear-powered carrier based near his town.

U.S. Ambassador to Japan J. Thomas Schieffer said Friday in announcing the move that the U.S. government took into consideration the long-standing concerns of city and prefectural leaders, including the current and previous mayors of Yokosuka.

However, he said the &#8220;sensitivity of the people of Japan to a nuclear-powered warship&#8221; was taken into consideration in the decision. &#8220;We want to assure all concerned that this carrier can and will be operated safely in Japanese waters.&#8221;

U.S. nuclear-powered warships have visited Japanese ports more than 1,200 times in the past 40 years, Schieffer said. Additionally, he said, &#8220;there has not been one single incident that caused the release of radioactive material that had an adverse impact on the environment.&#8221;

Rear Adm. James D. Kelly, commander of Naval Forces Japan, told Stars and Stripes on Friday that he believes the replacement ship will be safer than the aging, petroleum-burning Kitty Hawk.

As a newer ship, he said, the nuclear carrier will have better damage control and safety mechanisms. The ship will use little to no nuclear power while in port, so the reactors will be inactive. Any repairs done to the reactors, he added, will be conducted by U.S.-trained mechanics and only out at sea or in the States.

&#8220;Even nuclear reactors on the ground cause trouble. A nuclear reactor at sea has higher risks since it will be exposed to vibration, crashes and aircraft accidents,&#8221; said Masahiko Goto, leader of Citizens Coalition Concerning Home-Porting of a Nuclear-Powered Carrier to Yokosuka Naval Base.

Goto said a study by the University of California suggested a radiation leak at Yokosuka would expose hundreds of thousands to radiation, killing 100,000 people as far away as Tokyo, and could cause billions of dollars in damage.

His group has collected more than 300,000 signatures from people across Japan opposed to a nuclear carrier.

Kelly said to reassure people he plans to allow civilian groups to inspect the reactors.