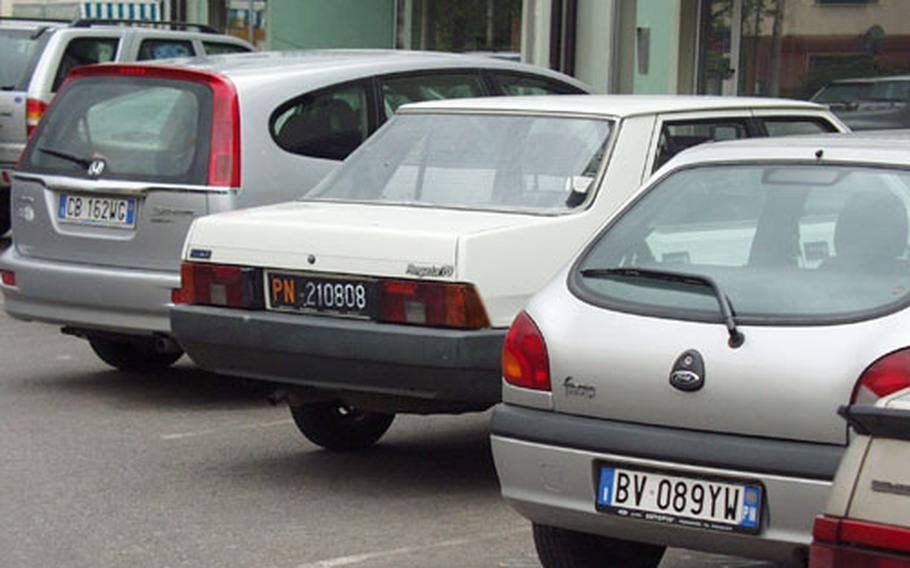 Are these cars parked at a shopping center in Aviano, Italy, owned by Americans or Italians? Thanks to recent efforts by military officials, it&#39;s pretty hard to tell. Most soldiers stationed in Italy are now driving with Italian plates on their vehicles. And hundreds of airmen will soon join them. (Kent Harris / S&S)

Thanks to recent decisions by the Air Force and Navy &#8212; following in the Army&#8217;s footsteps &#8212; Americans around the country will be using the license plates similiar to the ones locals have on their vehicles.

In some cases, notably Army communities in Vicenza and Camp Darby, that&#8217;s already the case. After a visit by Gen. B.B. Bell, the U.S. Army Europe commander, Army officials announced they were going to issue &#8220;cover plates&#8221; to all soldiers served by the 22nd Area Support Group.

Margret Menzies, an ASG spokeswoman, said all personnel &#8212; military and civilian &#8212; who are entitled to register vehicles with the command have received or will receive the Italian plates.

The Air Force, mainly represented by 4,200 airmen at Aviano Air Base, is following a similar path. The decision also came after a visit to Italy by the service&#8217;s top commander in Europe, Gen. Gregory S. Martin.

&#8220;If your vehicle can accept the new plates, you are receiving them,&#8221; said 1st Lt. Nicholas Sabula, a public affairs officer with the 31st Fighter Wing. Base officials said in an interview a few weeks ago that the cover plates didn&#8217;t fit all vehicles that Americans drive in Italy.

The base has already issued hundreds of cover plates to personnel and will soon issue another large batch. Like the Army, the Air Force is picking up the bill for the plates.

Previously, people could request the plates by paying at least 60 euros and facing a wait of several months. But talks involving various Italian ministries, the U.S. military and the U.S. Embassy in Rome paved the way for cheaper plates and a more streamlined process.

The Navy, with thousands of sailors stationed in bases in southern Italy around Naples and in Sicily, is the latest to announce the switch.

&#8220;We are in the process of moving to cover plates,&#8221; said Lt. Susan Henson, a spokeswoman for the Naval Support Activity, Naples.

Henson said the new policy, issued by the Navy Region Europe command, is still under review. But it appears that sailors will be asked to pay about 40 euros per car to get the plates. Henson said once a policy is in place, she would expect the distribution to go quickly.

Unlike similar plates available to Americans stationed in Germany, the plates issued to Americans in Italy do not carry a small &#8220;USA&#8221; designator or any special sequence of numbers or letters that are different from plates Italians use.