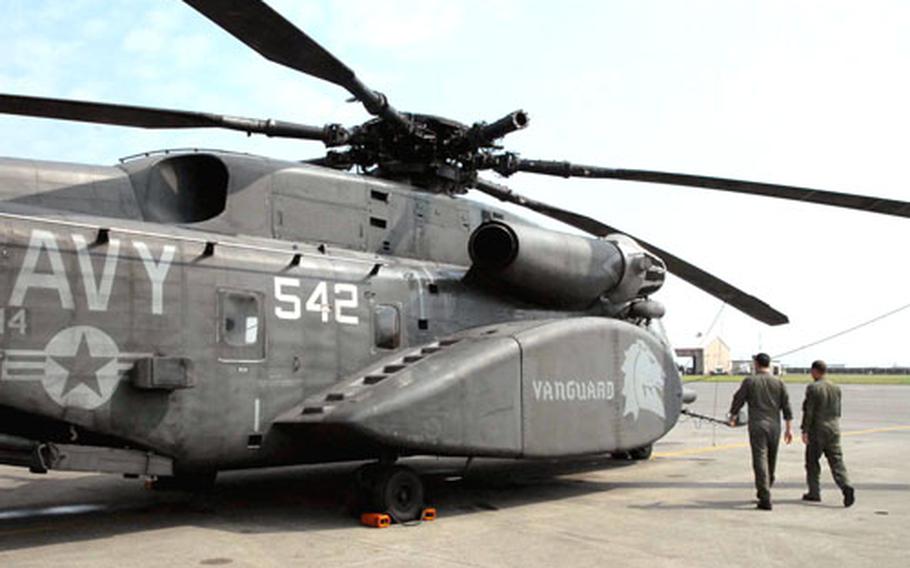 Iwakuni city and prefecture leaders filed a protest with the Japanese defense and foreign ministry after the Sept. 12 deployment, saying they were not consulted on the two MH-53E Sea Dragons and 60 personnel.

The air station denies the city was left in the lurch &#8211; local officials were told of the helicopters and crew before the deployment, said base spokesman Maj. Guillermo Canedo.

The Ministry of Defense said Wednesday it is reviewing the letter.

&#8220;It is regrettable that no prior information was provided and no efforts were made to gain understanding of the local communities by the [Japanese] government,&#8221; according to the letter from Iwakuni Mayor Katsusuke Ihara and Yamaguchi Prefecture Gov. Sekinari Nii.

If the ministry does not follow firm rules of notification, more troops could be deployed to Iwakuni little by little and local residents would be unaware, said Kiyomi Murao, head of the city&#8217;s Base Affairs Section.

The aircraft and crews are part of the Helicopter Mine Countermeasures Squadron 14, based in Norfolk, Va., and will spend the next year in Iwakuni conducting exercises, which include sharing operating techniques with Japanese forces, the Marine Corps Air Station Iwakuni public affairs office said.

While local government officials await a response from the Defense Ministry, Japanese and U.S. military personnel are meeting and learning from each other.

Japan and the United States are the only countries that fly the Sea Dragon, making the exchange a rare and useful opportunity, said Lt. Mike Lanzillo, who pilots the helicopters.

Unlike the U.S. crews, the Japanese have a system to monitor the tow field, the area where the helicopters tow mine-sensing devices, Rumple said.

The helicopters clear shipping lanes by dragging equipment in the ocean that detects and detonates mines. The heavy-lift helicopters also also be used to transport troops and supplies, according to Lanzillo.

The detachment most recently completed humanitarian work in the Pacific and Asia with the USS Peleliu. It transported hundreds of civilians for surgeries and medical attention, he said.

Lanzillo said the detachment makes a very small footprint in Iwakuni, a place where the local population is often concerned over expansions of the military.