Local leaders are making a comeback in Iraq 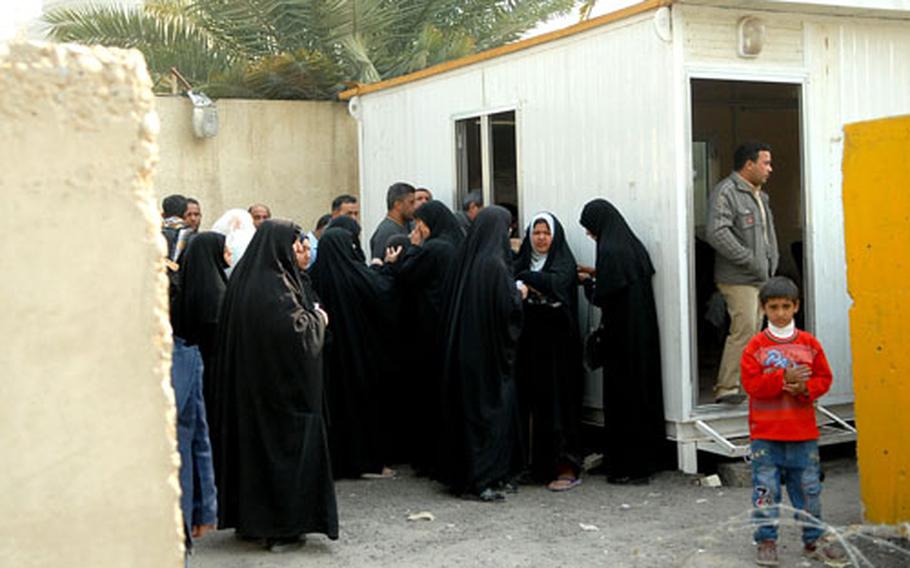 A crowd gathers at the entrance to the Mansour District Council building Jan. 19. Councils are becoming the one-stop shops for people to find out what’s going on in their community. (James Warden / S&S)

A crowd gathers at the entrance to the Mansour District Council building Jan. 19. Councils are becoming the one-stop shops for people to find out what’s going on in their community. (James Warden / S&S) 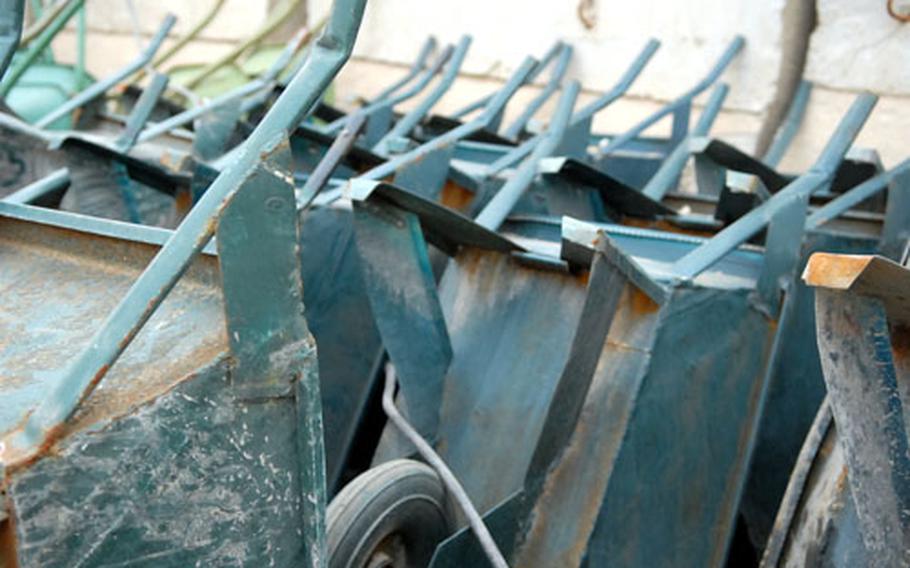 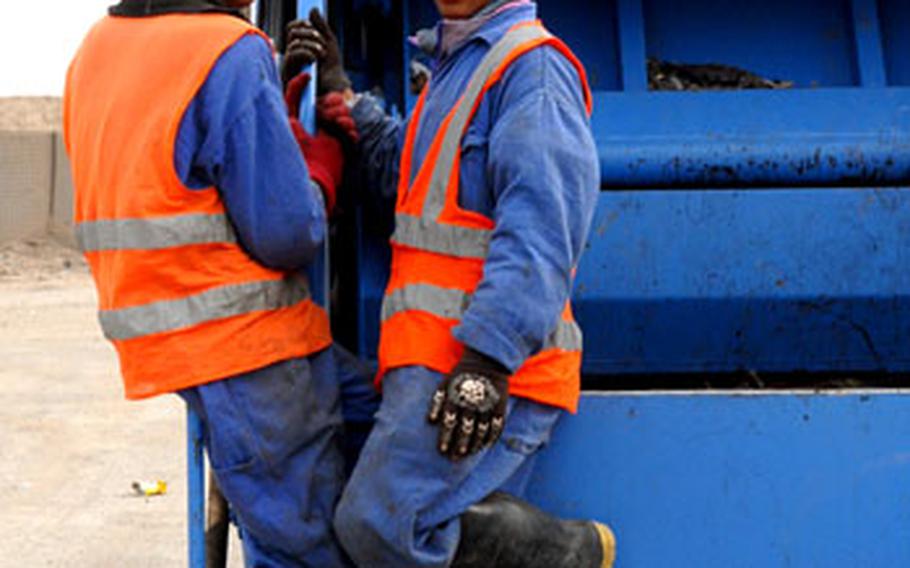 Public works substation employees ride on the back of an American-donated dump truck en route to clean up a part of Baghdad’s Amariyah neighborhood. (James Warden / S&S) 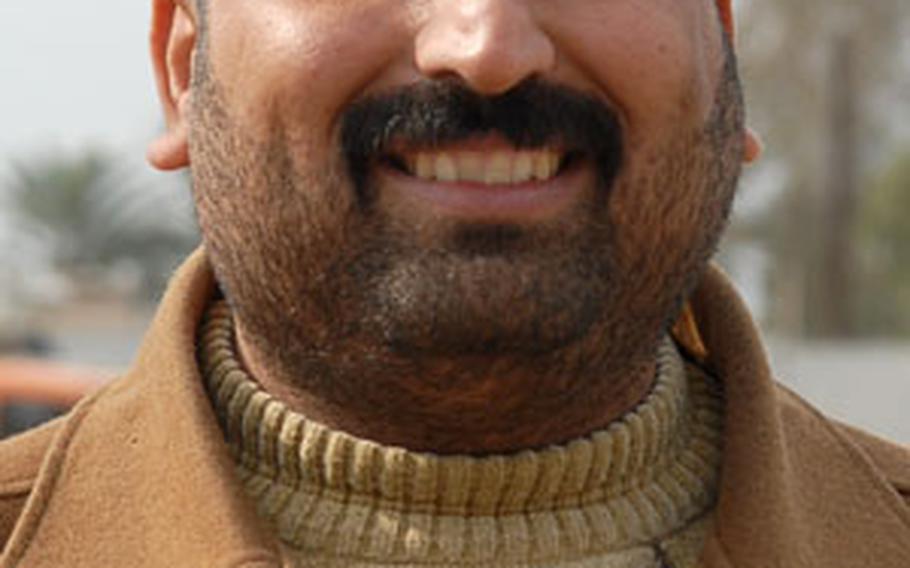 Salwan Talal Latif, head of the Amariyah public works substation, is frank about his future with the Iraqi government — he doesn’t think he’ll have a job once the Americans leave. (James Warden / S&S)

Mustafa Abdul Hussein Mohammad al-Fukaki isn&#8217;t the typical Iraqi civil servant. He has a master&#8217;s in philosophy and is fond of quoting Nietzsche.

"If it doesn&#8217;t kill me, it makes me stronger," al-Fukaki says of his job as the Mansour district&#8217;s "qa&#8217;im makam," an appointed official who manages the affairs of an administrative district.

The Nietzsche quote is apt. Qa&#8217;im makams were once one of the most important local leaders, but that changed when the Americans handed much of their powers to district councils, which now appoint the qa&#8217;im makams.

Like Nietzsche&#8217;s superman, though, qa&#8217;im makams are making a comeback and could become stronger than ever. They will have direct contact with the governor, potentially weakening the district councils.

The trend is one that is occurring across the Iraqi political spectrum. Organizations that lost power to local councils are rapidly resuming their place in Iraqi society, and that may prove ill for the new American bodies.

The Iraqi organizations have survived radically changing environments. The qa&#8217;im makams date back to Ottoman days.

The Americans themselves have had a role in strengthening these other groups. Leaders have been paying more attention to the long-established, unelected public bodies that they often overlooked in the past.

Where American laws clearly define who does what and where, Iraqi government bodies often perform the same duties in the same places. This means that Baghdad residents may not even know their local councils need strengthening if other bodies are stepping in to fill the vacuum &#8212; as they have been with recent security improvements.

What could save the councils?

The metal buildings just outside the Mansour District Council are little more than trailer homes, but it&#8217;s these buildings that may save the local councils.

Families who fled Iraq&#8217;s sectarian violence wait in a line outside for the official stamps necessary to get help returning home. Neighborhood and district councils, along with Iraqi security forces, are the face of the Iraqi government for this internally displaced population. This type of presence is what the councils need to thrive in a post-American Iraq.

Local council members and their American backers don&#8217;t plan on letting the councils fall into obsolescence quietly. By advertising the services they provide and tweaking the way they do business, the councils may yet carve out a place in Iraqi society.

Lt. Col. Christopher Beckert, deputy commander of the 2nd Heavy Brigade Combat Team, 1st Infantry Division, likes to call neighborhood and district councils "information central." They are becoming the one-stop shops for people to find out what&#8217;s going on in their community. Residents go there to get approval for food rations. Pensioners visit to get proof that they live where they say they do. It is these local councils that do the early vetting for many of the programs overseen by higher ministries.

Councils could actually draw strength from some competing organizations by becoming their link to the people.

Col. Louis Fazekas, a governance adviser, encouraged members of one council to list their complaints about the local public works department in a book. A representative of the beladiya, as such departments are called, would then look into the problems and report back. Such simple fixes can go a long way to creating a clear link between problem and solution.

But the fractious Iraqi politics that drives so many mad could just as likely be the councils&#8217; saving grace. Al-Orbay thinks political parties will eventually come to fight for seats on the local councils and perhaps try to control the Iraqi parliament through the local councils.

The public works substations like the one in Amariyah offer a third way that could bridge the gap between American and Iraqi institutions.

American leaders knew they needed to clean up war-torn neighborhoods and that existing institutions had been slow to step up. Yet they&#8217;d also learned that the Iraqis wouldn&#8217;t embrace any system that didn&#8217;t work with their own traditions.

So they built the substations, stocked them with the equipment they&#8217;d need to clean the streets and then turned them over to the local beladiya &#8212; all while working with local Iraqi authorities to ensure they were on board.

"All our efforts are geared to making a smooth transition, a transparent transition, to beladiya control," Fazekas said. "We don&#8217;t tell them where to go, what to do and when to do it."

Salwan Talal Latif, the head of the Amariyah substation, works directly for the beladiya. He&#8217;s overseen a crew of young men on blue garbage trucks who have given their neighborhoods a cleanliness they haven&#8217;t seen in six years of war.

Latif is an engineer with more education than his beladiya boss. He is responsible for five muhallas, or areas, compared to the beladiya&#8217;s two. Yet he remains ever mindful of the need to stay in the background.

"We currently have the ability to take over the whole area without beladiya help," Latif said. "But if we do that, they will be out of a job and they will not be happy with that."

Latif&#8217;s counterparts in other parts of Baghdad angered some Iraqi officials by attending district council meetings. The Americans had to step in, suggest they not attend and soothe over hurt feelings. The message was clear: A can-do attitude can sometimes be counterproductive.

Latif is frank about his future with the Iraqi government; he doesn&#8217;t think he&#8217;ll have a job once the Americans leave.

The chance that local councils and other American creations could fail is real. Subprovincial elections are scheduled for this summer, and it&#8217;s anyone&#8217;s guess what will happen after that.

Al-Orbay is particularly worried about the strong showing that Prime Minister Nouri al-Maliki&#8217;s coalition made in January&#8217;s provincial elections. Al-Maliki believes in a strong central government. At the same time, many of the Iraqi leaders who most fiercely opposed the councils in the beginning are still around.

"Since 2003, we&#8217;ve dealt with three governments so far and we are about to deal with another government in the near future," al-Orbay said. "Unfortunately, all the political parties see us as American agents because we worked with the Americans. We will face problems because of that.