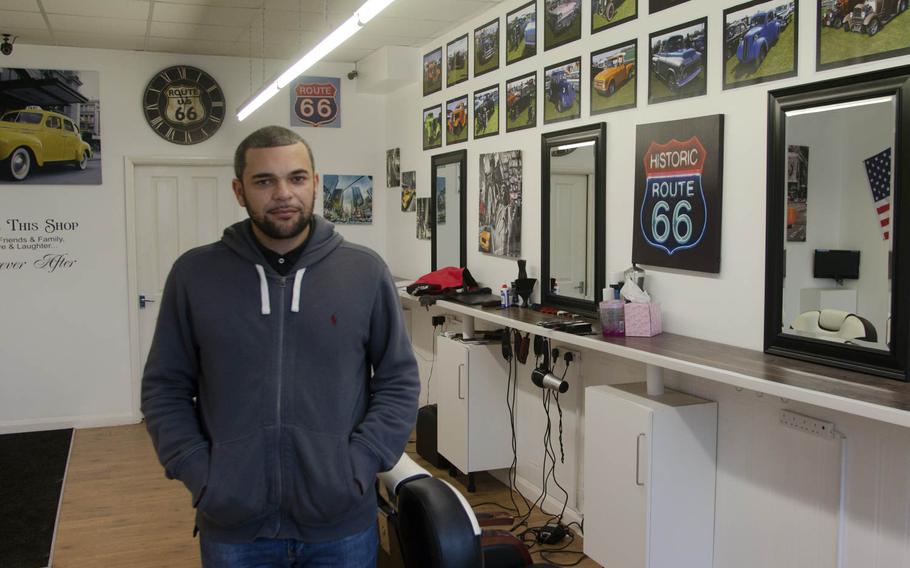 Wesley Churchill opened an American-oriented barber shop in Mildenhall, England, a little more than one year ago in the hopes of capitalizing on the potential business of thousands of airmen stationed at nearby RAF Mildenhall. Since the announcement Thursday, Jan. 8, 2015, of U.S. plans to close the base, however, Churchill said he is concerned. (Adam L. Mathis/Stars and Stripes)

Wesley Churchill opened an American-oriented barber shop in Mildenhall, England, a little more than one year ago in the hopes of capitalizing on the potential business of thousands of airmen stationed at nearby RAF Mildenhall. Since the announcement Thursday, Jan. 8, 2015, of U.S. plans to close the base, however, Churchill said he is concerned. (Adam L. Mathis/Stars and Stripes) 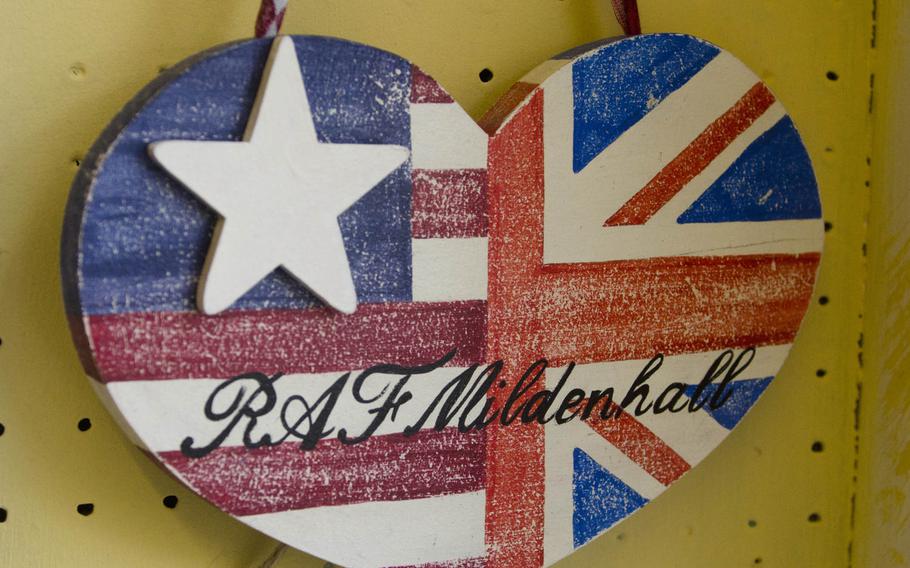 A decorative sign hangs in Bon Ami Cottage Crafts located in the center of Mildenhall, England. Melanie Brooks, who owns the store with her husband, joked these kind of signs will become antiques with the closure of the U.S. air base at RAF Mildenhall. The planned closure was announced on Thursday, Jan. 8, 2015. (Adam L. Mathis/Stars and Stripes)

MILDENHALL, England — Webbs Sandwich Bar was bustling at lunch time, with nearly every seat taken in the eatery not far from the U.S. air base at RAF Mildenhall.

But sitting in a corner of the store, one of the owners sounded a cautious note a day after the Pentagon announced plans to close operations at RAF Mildenhall in the next several years. Paul Webb estimated that about 40 percent of his business was American — and the majority of that was from the base. Though the Defense Department has not given a precise timeline, the base closure will mean the eventual loss of 3,200 military personnel.

Webb won’t have to shutter his business, but he and his wife, who run the cafe, may have to cut staff.

“Hopefully, whoever takes that area over will … employ perhaps more people,” he said.

His business and others in the town of Mildenhall may have reason to worry, but the news isn’t all bad.

A 2012 economic analysis by U.S. Air Forces in Europe said Mildenhall’s military personnel and civilian employees spent about $191 million off base every year. But local business owners are taking heart from the fact that the Air Force is planning to expand nearby RAF Lakenheath, whose airmen and civilians are already pump in an estimated $304.6 million into the economy. About 1,200 additional troops will be stationed at Lakenheath starting in 2020, when the U.S. Air Force will base two F-35 squadrons there.

Melanie Brooks, who owns the craft store with her husband, was not concerned about the effect of Mildenall’s closure on on their business, even though about 40 percent of her customers are American. She joked that some of her products, decorative wooden signs that say “RAF Mildenhall” would become antiques. Her concern is reserved for others be badly hurt.

“I do know a lot of people who rely on (RAF Mildenhall),” she said.

One business likely be hard hit is Beatrice Carter Property. Almost all of the real-estate agency’s customers are from the bases, and about half of them come from Mildenhall, said owner Carol Jaggard.

“We’re going to suffer more than anybody else,” Jaggard said.

She is hoping customers from Lakenheath will keep her losses down to about 25 percent.

“I shall miss them dreadfully,” Jaggard said, speaking of her American customers.

Jaggard’s concern is shared by Nigel Roman, a councilor who represents part of the town of Mildenhall.

In a phone interview on Thursday, he said he thought local businesses would suffer despite the fact that Lakenheath would remain open. Americans assigned to Lakenheath tend to patronize shops closer to their base.

The announcement made Wesley Churchill give at least some thought to selling his business a few years from now. He opened Route 66 Barber Shop little more than a year ago, and the American flag logo on his sign points to his customer base. He is half American, trained by an American barber, and he cut hair for Americans at RAF Alconbury before opening his shop here.

Churchill had heard rumors the base might close but dismissed them since rumors had abounded that Alconbury would close and that didn’t happen.

“I was a little bit gutted,” Churchill said, describing his reaction when he heard the news about Mildenhall.

Still, optimism seemed to prevail over gloom among shop and restaurant owners. Dee Porter, owner of Dees Floral Designs, estimates that 20 percent of her business comes from Mildenhall. The sign on her store says that Dees makes on-base deliveries.

While she will notice a reduction in business, Porter said, it will not make her close shop.

It will be a shame, she said, “that we don’t have them here for … the social side of things.”