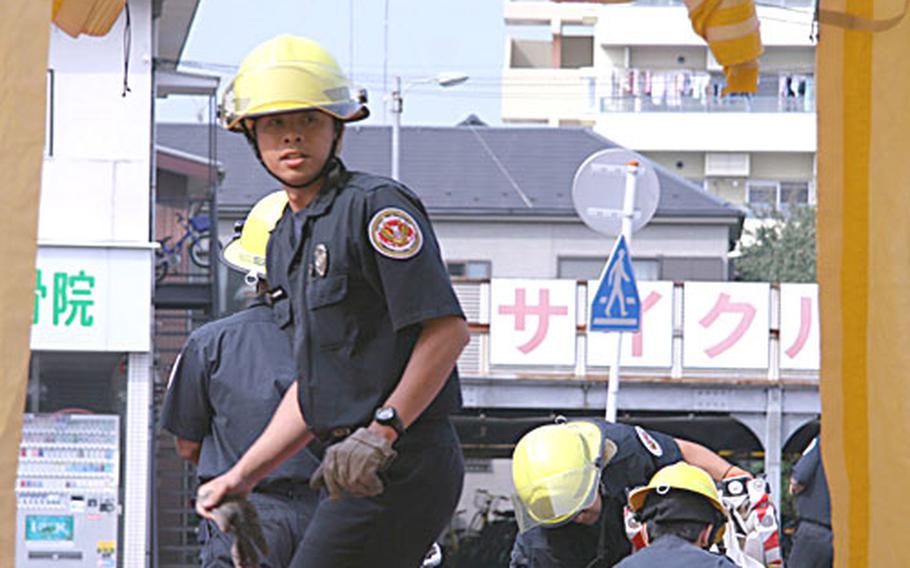 That incident should spark a chain reaction leading to the base, where firefighters would be prepared to help Yamato city with a fast-acting decontamination team.

That plan was tested Wednesday in a large-scale disaster drill organized by Yamato city, Yamato police and the Sagami Railway, Sotetsu, the third such exercise.

This year, Atsugi&#8217;s fire department was invited to take part and asked to take the role of decontaminating victims &#8212; about 30.

More than 300 fire and police officials, including Kanagawa Prefectural Police&#8217;s Nuclear-Biological- Chemical terrorism response special force, took part in the drill, according to a Yamato city news release. About 50 people from neighborhood associations near the station participated as passengers.

During the drill, officials detected the poisonous gas in the train, then rescued the passengers. Base fire officials set up a decontamination shower. They &#8220;cleaned&#8221; passengers &#8212; simulating the decontamination process &#8212; and led them to an air tent set up by Yamato police officials, according to the city and the base.

&#8220;We asked for base participation since it has the know-how for fighting toxic-material terrorism,&#8221; a city spokesman said.

The Kitasato University Hospital Disaster Medical Assistance Team set up a triage for patients and transported those needing assistance to the hospital.

The drill was the first for Atsugi&#8217;s new fire chief, William Casey, who, when he was in the Air Force, oversaw the Pacific Air Forces Fire Department.

Casey called the drill a great opportunity to train with off-base emergency services and for the base to provide a service to the city.

Takanori Egami, Yamato city fire chief, said in a statement, &#8220;We were able to improve emergency and rescue skills in case something happens.&#8221;

The base and city have been holding joint drills for a few years to help prepare for disasters and work better together, Casey said, &#8220;so we&#8217;re not going to do this for the first time at 2 a.m.&#8221; should a real emergency occur.