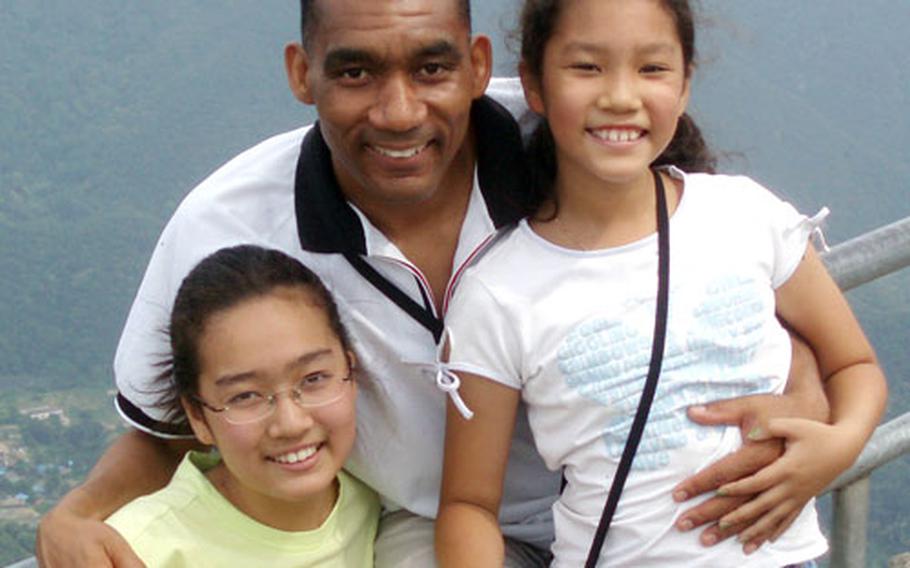 Air Force Lt. Col. Andrew Bossard poses with his daughters at Mt. Daduk in May. Bossard, who is African-American and Korean, was raised in South Korea until age 14 by his Korean mother. He now teaches at the Korean Air University. (Courtesy of Andrew Bossard)

CAMP CASEY, South Korea &#8212; A Korean who hears Lt. Col. Andrew Bossard speak on the phone would never question that he is Korean.

Nor should they question it; Bossard was born and raised in South Korea until he was 14, by his Korean mother.

But when strangers meet Bossard, a U.S. Air Force exchange instructor to the South Korean air force, and then hear him speak, they sometimes go into shock.

Bossard&#8217;s birth father is an African-American, and few people here think of him as Korean after looking at him.

"Not unless they know me very well," Bossard says.

Bossard made friends as a child that were so close, they are still his best friends today. The close relationships among Koreans are something Bossard says he is proud to have in his life.

But there is a flip side to Korean culture; Bossard grew up with discrimination every day. It&#8217;s what led his mother to relinquish him for adoption in 1979 to David Bossard, a U.S. military contractor, and his wife, Marilyn.

"[My Korean mother] gave me an opportunity to succeed," Bossard said. "I would always be pushed away as a half-breed in Korean society back then."

Bossard knew only how to say "hello" in English when he arrived in the United States. But at his adopted parents&#8217; urging, he went to college and accepted a commission as an Air Force signal officer.

Since 2005, Bossard has worked as an instructor at the South Korean Air University in Suwon.

His skills keep him in demand for a variety of subjects. As a signal officer by trade, he teaches a course on communications systems. He teaches other subjects as varied as air strategy and space power, joint doctrine and military English.

Last month, Bossard and his students toured the Close Combat Tactical Trainer site at Camp Casey, where they tested Army-tank and Bradley-vehicle simulators.

The South Korean officers there said they gain from a man who can put U.S. concepts into a Korean perspective so naturally.

"I was able to use contextual Korean references with him that only Koreans would use," said Maj. Jang Sung-ho, one of Bossard&#8217;s students.

"He teaches from a parallel perspective, with lots of freedom in the classroom," Jang said.

Bossard finds that some of his students agree with his approach and that maybe, attitudes on leadership are changing with time &#8212; just as attitudes on what makes a person Korean are changing.

When Pittsburgh Steelers wide receiver Hines Ward, who also is both African-American and Korean, visited South Korea after being named Super Bowl MVP in 2006, it prompted a national debate on treatment of mixed-race individuals.

That debate is important not only for Bossard, but also for his daughters. MeeSoh, 13, and MeeDm, 10, are the biracial offspring of Bossard and their Korean mother.

"It&#8217;s not happening fast enough," Bossard said. "But as those sentiments change, we, the original [biracials] get the benefit of the changes."

Anyone who has tried to learn Korean knows there is a big difference between the formal language taught to beginners and the reality of everyday use.

Maj. Daemon Hobbs is going through a similar experience after learning Korean at the Defense Language Institute in Monterey, Calif., and now takes classes as an exchange student at the Korean Air University in Suwon.

"Plus, DLI is an Army school, and they don&#8217;t teach Air Force words, so you have to learn all of that," says Hobbs, who is married to a Korean woman.

While studying the history of airpower operations, Hobbs also has gained an education on South Korean air force culture that could serve him well as a joint officer one day.

But differences like saluting indoors and other formalities took root fast; so much so that he once greeted U.S. Ambassador Alexander Vershbow in Korean. Vershbow didn&#8217;t miss a beat, Hobbs says.

Hobbs&#8217; classmates seem interested in him, he says. They ask him questions about Operation Anaconda in Afghanistan or about the differences between the two air forces.

"But a lot of times they just want to practice their English," Hobbs said.