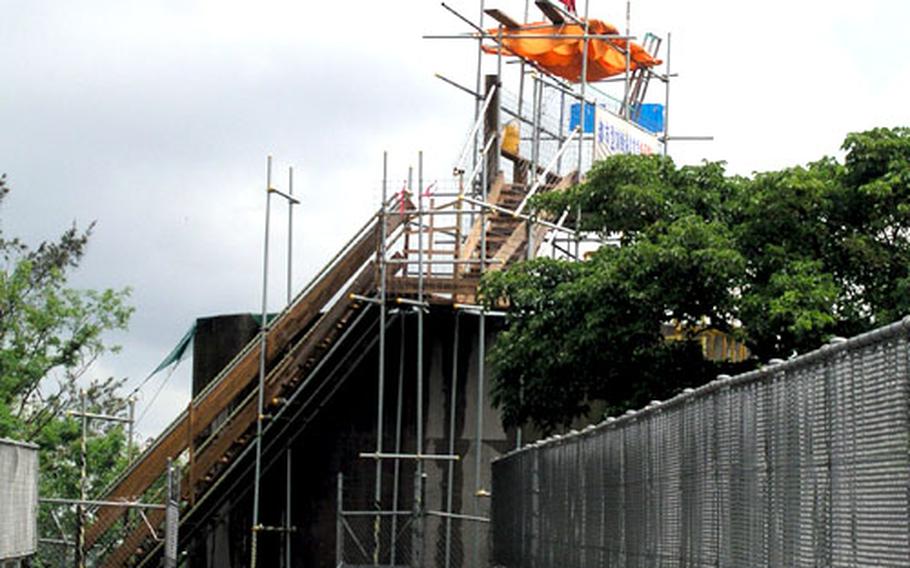 Igei residents have been staging daily protests at Camp Hansen’s main gate since May 2004, when construction of the Army-funded facility Range 4 started. At that same time, Kin residents erected an impromptu observation tower atop a water tank in a protest against the urban- combat training complex. The observation tower overlooks the training area on the far side of the Okinawa expressway. (Chiyomi Sumida / S&S)

Okinawa Gov. Keiichi Inamine criticized the military and Tokyo government, which gave its consent to the training at Range 4, located about 328 yards from the Igei community of Kin.

&#8220;What it means to forcibly conduct the training without ensuring safety of residents is that the Japanese government, who provides the military with the military installation, should undertake the full responsibility for every problem that arises from the training,&#8221; he said in a statement Tuesday.

In the past, bullets have strayed from Camp Hansen training sites and hit Igei, he said, adding that even with safety measures, accidents can happen.

Small arms &#8212; pistols and rifles &#8212; are being fired on the new range, according to Air Force Col. Victor Warzinski, U.S. Forces Japan spokesman.

Warzinski said several safety measures have been implemented at the range.

Inside the &#8220;shoot house,&#8221; he said, weapons firing will be indoors with small caliber weapons and &#8220;dense rubber bullet traps&#8221; will be placed behind targets to keep bullets inside the building.

Outside the building, Warzinski said, weapons will be fired only toward the northwest &#8212; away from residential areas. The outer wall of the building facing a rappelling tower also will be covered with thick rubber, he said.

&#8220;Furthermore, each time the range is used there will be an officer or senior [noncommissioned officer] in charge of the range who is responsible for safety and the overall conduct of the range,&#8221; Warzinski said in an e-mail response to query. &#8220;There is also a dedicated safety officer on the site whose sole responsibility is to ensure training is conducted safely.&#8221;

Spotters, whose job is to ensure the shooter has proper sighting of the target, will be positioned next to soldiers who are firing on the range, Warzinski said. The spotter will take in factors such as wind and will tell the shooter when it is safe to fire.

&#8220;Every precaution will be taken in training, and due consideration will be paid to local concerns,&#8221; Warzinski said. &#8220;Thus the [government of Japan] does not consider the training to be conducted by the U.S. forces at Range 4 to be a safety risk for local residents.&#8221;

Igei residents have been staging daily protests at Camp Hansen&#8217;s main gate since May 2004, when construction of the Army- funded facility started.

&#8220;Where on U.S. land does the military conduct live-fire training like this in such close proximity to a local community?&#8221; asked Masafumi Ikehara, district mayor of Igei. &#8220;Voices of residents who have been standing at the gate every day for 400 days never reached the military. We residents know through our own experience of stray bullets and bush fire, that the training is not as safe as they tell us.&#8221;

While sounds of gunfire echoed throughout the community during training Tuesday, Ikehara said: &#8220;Try to come and live here&#8230; our community is like a battlefield.&#8221;

Plans to relocate Range 4 within camp being worked out

CAMP FOSTER, Okinawa &#8212; While Yuji Miyamoto, ambassador in charge of Okinawan affairs of the Ministry of Foreign Affairs, believes Camp Hansen&#8217;s new urban-warfare complex was designed with safety in mind, plans are being made to relocate the facility, he said.

&#8220;To give consideration to strong concerns about the facility expressed by Kin town and Okinawa Prefectural Government, we have decided to relocate the facility near Hansen&#8217;s Range 16,&#8221; he said. &#8220;In the meantime, until the new facility is completed, Japan has no option but to accept the military to conduct the necessary training to achieve the purpose of the bilateral security.

&#8220;I &#8230; believe that the training at Range 4 will be conducted with thorough safety measures. To dispel anxiety among residents over the facility, we will continue our effort to move it to the back of Range 16 at the earliest possible time.&#8221;

U.S. Forces Japan has been working closely with the Japanese government on the issue, said Air Force Col. Victor Warzinski, USFJ spokesman. He said they have &#8220;agreed in principle on the relocation of the range,&#8221; but said details of a formal agreement are being worked on, and moving the facility was a &#8220;matter for further discussion between our governments.&#8221;

Last month USFJ announced Range 4 would be available for live-fire exercises after June 27. The facility was designed to replace an older training complex at another location on Camp Hansen, Army officials said, and would combine training currently being conducted by the Army&#8217;s 1st Battalion, 1st Special Forces Group on camps Hansen and Schwab.

The complex includes a shoot house, a breaching bay, 50-meter flat shooting ranges, a rappelling tower and an administrative area.