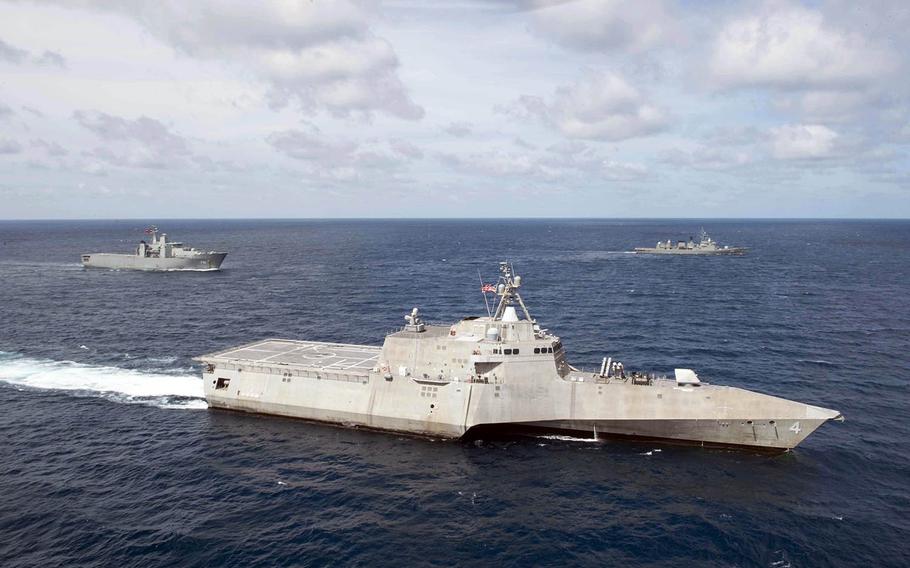 YOKOSUKA NAVAL BASE, Japan — The Navy’s only overseas littoral combat ship is heading home after a 14-month rotational deployment to Southeast Asia.

The San Diego-based USS Coronado departed Singapore Saturday after participating in 11 exercises and conducting 10 port visits in the region, a Navy statement said.

The Coronado — the third LCS to conduct a rotational deployment to Southeast Asia — used Singapore’s Changi Naval Base as a maintenance and logistics hub.

An unnamed LCS has been chosen to replace the Coronado in mid-2018 and will play a similar role in the region, said Task Force 73 spokesman Arlo Abrahamson.

The warship is a relatively new platform for the Navy, which commissioned its first LCS in 2010. The service has four “Freedom variant” and five “Independence variant” LCSs in the fleet, although more than a dozen others are being developed. The USS Little Rock is scheduled for commissioning next month.

The LCS, which trades in some armor and armament for speed, is designed to operate in shallow waters and access areas Navy cruisers and destroyers cannot. The Navy said the LCS is uniquely suited to operate in Southeast Asia.

“The rotational deployment of USS Coronado demonstrated the relevance of LCS as a platform tailor made for the dynamic and congested sea lanes, straits and archipelagos of South and Southeast Asia, providing flexible options and tactical advantages,” said Task Force 73 commander Rear Adm. Don Gabrielson.

A highlight of the Coronado’s deployment was a springtime anti-piracy patrol with the Philippine Navy frigate BRP Ramon Alcara, Gabrielson told Stars and Stripes in August.

“The ship is ideally suited [for anti-piracy missions] because of its ability to launch and recover not just unmanned and manned helicopters, but also rigid hulled inflatable boats that can go pretty far to conduct either boardings or monitoring,” he said.

Some analysts have expressed concerns over the warship’s light armament; the LCS Forth Worth was shadowed by a more heavily armed Chinese frigate during a May 2015 patrol in the South China Sea.

The Coronado worked out some wrinkles in the LCS program during its deployment. It missed its target during an anti-ship harpoon block 1C missile test at the Rim of the Pacific exercise in July 2016. In August, the Coronado successfully tested a harpoon missile, striking a target beyond its visual range.

The ships have also struggled with repair and maintenance issues. The USS Freedom and Fort Worth — two LCSs previously deployed to Southeast Asia — were often sidelined because they needed repairs. After departing for Singapore last year, the Coronado suffered maintenance issues that forced it to return to its launching point in Hawaii.

The Navy statement notes that during the 14-month deployment, the ship’s crew reduced the average repair time from 15 days to four.

Gabrielson said he expects LCSs to become a mainstay in the Pacific.

“We look forward next year to having two LCSs here and in future years getting four,” he said. “It won’t be long, and it’ll be a regular fixture out here in large numbers.”