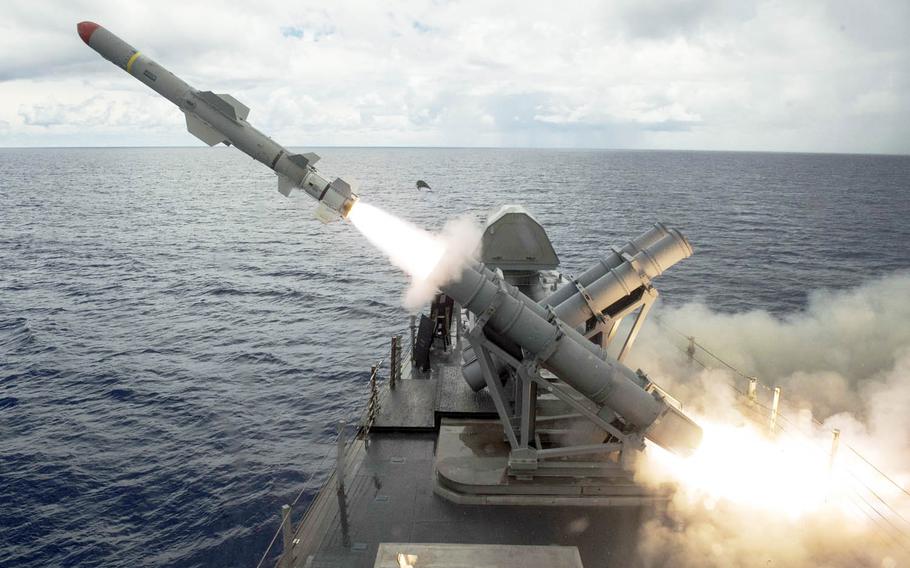 A harpoon missile launches from the missile deck of the littoral combat ship USS Coronado off the coast of Guam, Tuesday, Aug. 22, 2017. (Kaleb Staples/U.S. Navy)

A harpoon missile launches from the missile deck of the littoral combat ship USS Coronado off the coast of Guam, Tuesday, Aug. 22, 2017. (Kaleb Staples/U.S. Navy) 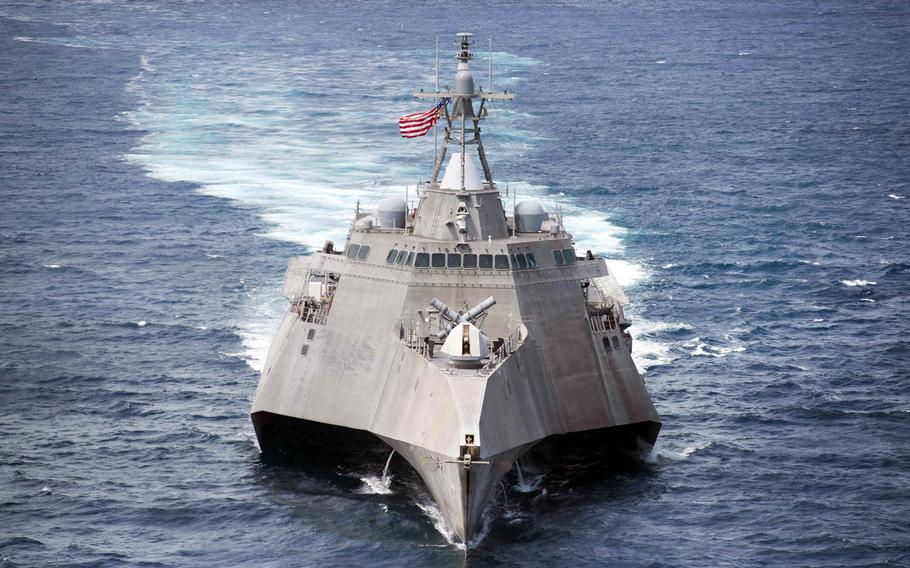 YOKOSUKA NAVAL BASE, Japan — The USS Coronado put its lethality on display this week, successfully launching a ship-killing missile off the coast of Guam.

“The missile test was significant because it was the first time a U.S. Navy surface command deployed the combination of both unmanned and manned helicopters together to locate and pass targeting and conduct analysis of an over-the-horizon long-range anti-surface missile shot,” Rear Adm. Don Gabrielson, Task Force 73 commander, told Stars and Stripes Friday.

The Navy describes the harpoon missile as an “all-weather, over-the-horizon weapon designed to execute anti-ship missions against a range of surface targets.” It is used by a large number of cruisers, destroyers and a few littoral combat ships.

Tuesday’s test was round two for the Coronado, which conducted a similar test during Rim of the Pacific drills in July 2016 in which it successfully launched a harpoon missile that did not hit its over-the-horizon target.

This time, the ship struck its target, an important development for the LCS. An MQ-8B Fire Scout unmanned aerial system and MH-60S Seahawk helicopter helped the Coronado strike its target, the Navy statement said.

The LCS is a relatively new ship for the Navy. The first LCS, USS Freedom, was commissioned in 2010, according to the Navy’s LCS website. The service has four “Freedom variant” and five “Independence variant” LCSs in the fleet, although more than a dozen ships are being developed. The Coronado, which is stationed in Singapore, is the only forward-deployed LCS.

The LCS trades in some armor and armament for speed and is designed to operate in shallow waters and access areas Navy cruisers and destroyers cannot. Gabrielson said this makes the LCS a good fit for Southeast Asia. He noted there are more than 50,000 islands between the Philippines and Sri Lanka, and in that chain there are less than two dozen places where a destroyer or a larger ship can safely navigate.

The LCS can operate in more than 1,000 locations in that arc, and the ship’s speed allows it to function as a “ninja” for the Navy, Gabrielson said.

“When we really use LCS to its full potential, we use it like a ninja warrior,” he said. “It sneaks in from the shadows, it attacks from the shadows and then it disappears. It’s gone immediately or before anybody has a chance to locate it. It gets lost in the clutter of the islands so that it complicates anyone’s ability to attack it.”

Some analysts have expressed concerns over the LCS’s light armament; the LCS Forth Worth was shadowed by a more heavily-armed Chinese frigate during a May 2015 patrol in the South China Sea. The Coronado’s missile test aligns with a push by the Navy to give LCSs more firepower.

“We’re here to show that there’s a reason why LCS has combat as its middle name, and the harpoon shot is one example of that,” Gabrielson said.

The Coronado can also work alongside partner nations on anti-piracy missions and ensure freedom of navigation in the area, Gabrielson said. Last June, the Coronado conducted an anti-piracy patrol with the Philippine Navy Frigate BRP Ramon Alcaraz.

“The Coronado has already assisted the Philippines with a counter-piracy mission, and we are ready to do more,” he said. “The ship is ideally suited [for anti-piracy missions] because of its ability to launch and recover not just unmanned and manned helicopters, but also rigid hulled inflatable boats that can go pretty far to conduct either boardings or monitoring.”

Gabrielson said he expects LCSs to become a mainstay in the Pacific.

“We look forward next year to having two LCS’s here and in future years getting four,” he said. “It won’t be long and it’ll be a regular fixture out here in large numbers.”