Little Okinawans have a big time with Marine volunteers 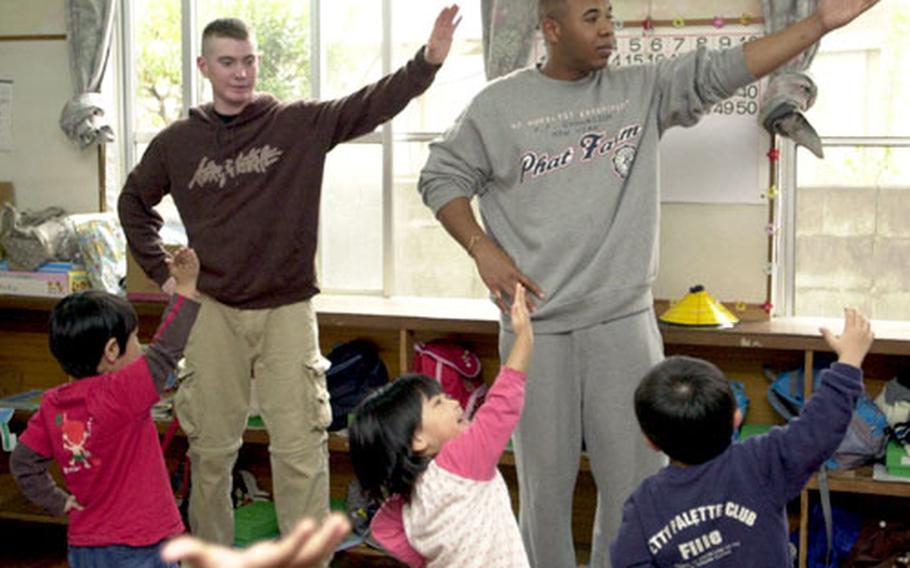 Lance Cpl. Stephen Gomez, right, and Pfc. Class Kyle Roberts get instructions Friday in a traditional Okinawan dance, courtesy of the 3-year-olds at Suginoko Nursery School in Kin, Okinawa. The Marines had earlier taken the children through a round of the “Hokie Pokie.” (Fred Zimmerman / S&S)

Lance Cpl. Stephen Gomez, right, and Pfc. Class Kyle Roberts get instructions Friday in a traditional Okinawan dance, courtesy of the 3-year-olds at Suginoko Nursery School in Kin, Okinawa. The Marines had earlier taken the children through a round of the “Hokie Pokie.” (Fred Zimmerman / S&S) 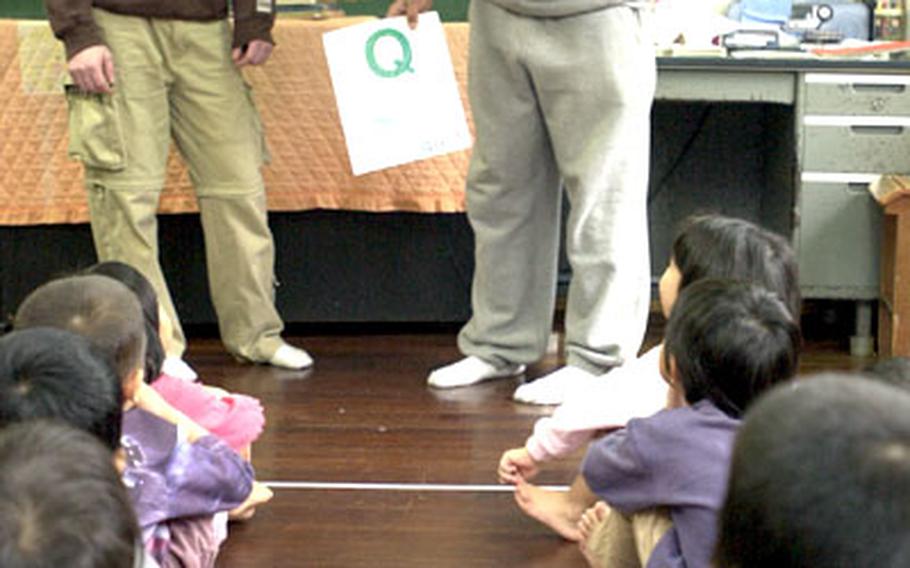 Gomez and Roberts teach the class how to listen to the sound of words during the English-teaching portion of their visit. Seven Marines from Camp Hansen spent an hour at Suginoko. Marines from the base go there twice a month to hold lessons and interact with the children. (Fred Zimmerman / S&S)

Seven Marines left Camp Hansen Tuesday morning and traveled a short distance to the Suginoko Nursery School. There, the young servicemembers taught some English and spent a little time playing with 3-, 4- and 5-year-olds.

Marines and sailors have been volunteering at the school for roughly the last 10 years, according to Kochi Chiyoko, Camp Hansen Community Relations specialist.

The lessons are held twice a month, with each visit lasting about one hour.

The volunteers spent Tuesday going through the alphabet, associating the letters with words, spelling, counting and recognizing colors &#8212; all in English.

When the teaching was done, it was time for fun.

Some students performed a traditional Okinawan dance; the classes then danced and sang the &#8220;Hokie Pokie&#8221; with the Marines to end the visit.

The school&#8217;s director, Katsutoshi Higa, said learning about another country is important, but the biggest benefit is that the children really enjoy the visits.

On the two Tuesdays each month the Marines and sailors visit, the director said, &#8220;the children sit and wait in anticipation all morning.&#8221;

Higa said the school has formed such a bond with the servicemembers that students now look at the Marines as big brothers and sisters.

He said every time the school year begins, which is in April, the students at first are apprehensive of the Americans but quickly warm up to them.

As the school year progresses, the students not only open up more but learn more English.

&#8220;These kids are in nursery school and are already learning a second language. They can count up to 30 in English, and kids this age back in the States are learning how to tie their shoes.&#8221;

Fellow volunteer Lance Cpl. Stephen Gomez has been helping at the school for a while; he said Tuesday&#8217;s trip probably was about his sixth or seventh.

Gomez continues to return because he really enjoys the time there, he said, and plans to do so until he leaves the island.