Little-known rules govern working off base 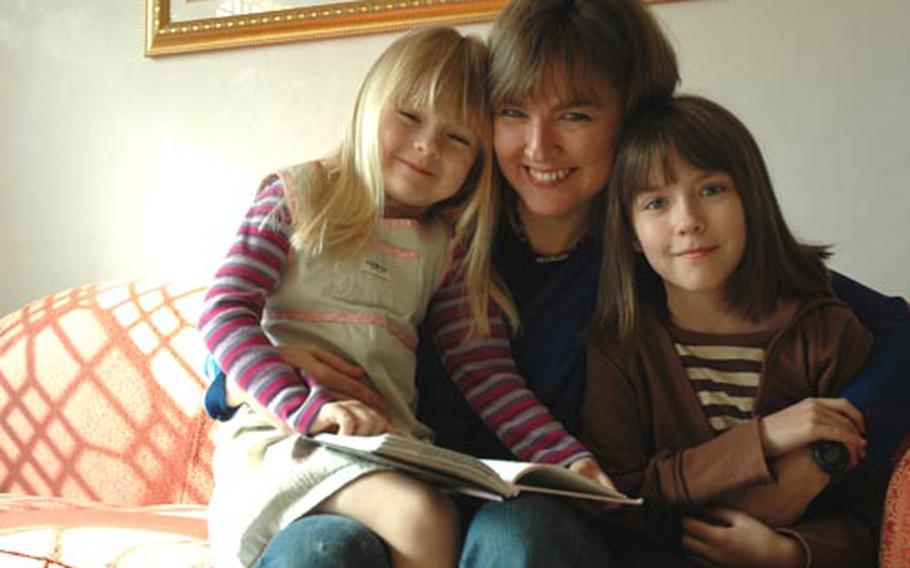 Andrea Stone with her two daughters, Faith, 4, left, and Abby, 9. Last year, Faith began modeling for a South Korean modeling agency; the family decided to stop when they couldn&#39;t figure out whether they were violating their visa or whether they needed to pay local taxes. (Teri Weaver / S&S)

SEOUL &#8212; Last May, a South Korean woman approached Andrea Stone and her three kids on Yongsan Garrison and asked if she&#8217;d ever considered letting the children model.

The offer intrigued the family, and soon the youngest Stone, 4-year-old Faith, was modeling children&#8217;s wear for print ads about once a month.

But as the U.S. tax season drew nearer, Stone and her husband, Staff Sgt. Joe Stone, began to wonder what to do about that South Korean income, which over time amounted to about $1,000.

They had called the legal office on Yongsan to try to learn the rules about children earning money in South Korea. One person said it was fine; a second person said it wasn&#8217;t, Andrea Stone remembered. In the end, she thought the whole process must be all right &#8212; after all, the family was approached several more times on base by recruiters who wanted to hire the kids.

It turns out, the Stones&#8217; experience wasn&#8217;t all right, according to an 8-year-old agreement between South Korea and the United States.

The Stones, like all families of servicemembers and Pentagon workers in South Korea, live under the Status of Forces Agreement. This SOFA allows the families to live in South Korea and work for the U.S. military without paying any local taxes.

So before any SOFA resident can take a job off base, he or she must obtain an employment permit through the South Korean Immigration Service, according to information supplied by an 8th U.S. Army spokesman.

And even then, the job must fall under specified categories, including professor, foreign language instructor, researcher, technical guidance provider, lawyer, doctor, artist or model, according to the Korean Immigration Service&#8217;s Web site.

Off-base employers should help SOFA residents get an employment permit from the South Korean Immigration Service, according to information provided by spokesman Maj. Jerome Pionk. Any income earned is subject to South Korean tax laws, Pionk wrote in response to questions.

Stone said her family has decided to stop modeling.

"We&#8217;re just better off getting out of it altogether," she said in a phone interview last week.

But Stone also said she has plenty of friends who are continuing to model, without getting special permission.