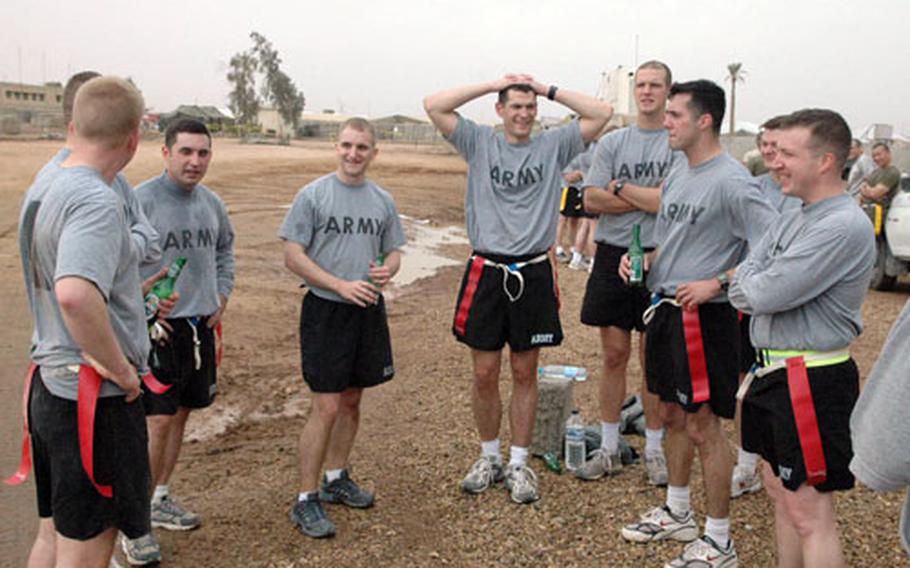 Soldiers of the 54th Engineer Battalion take a break during a Christmas Day flag football game at Camp Ramadi, in Iraq. The unit’s commander said several missions had been planned for the day, but were canceled at the last minute. (Monte Morin / S&S)

Soldiers of the 54th Engineer Battalion take a break during a Christmas Day flag football game at Camp Ramadi, in Iraq. The unit’s commander said several missions had been planned for the day, but were canceled at the last minute. (Monte Morin / S&S) 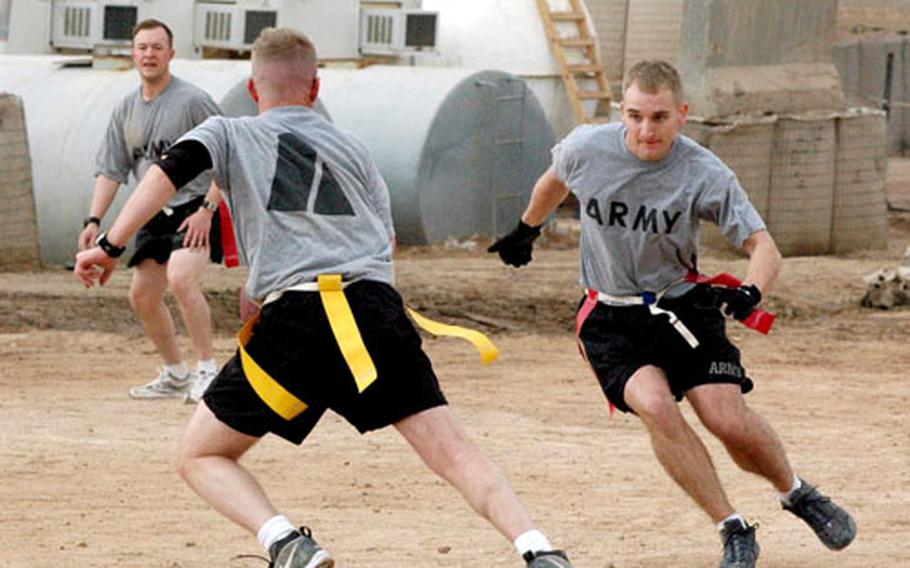 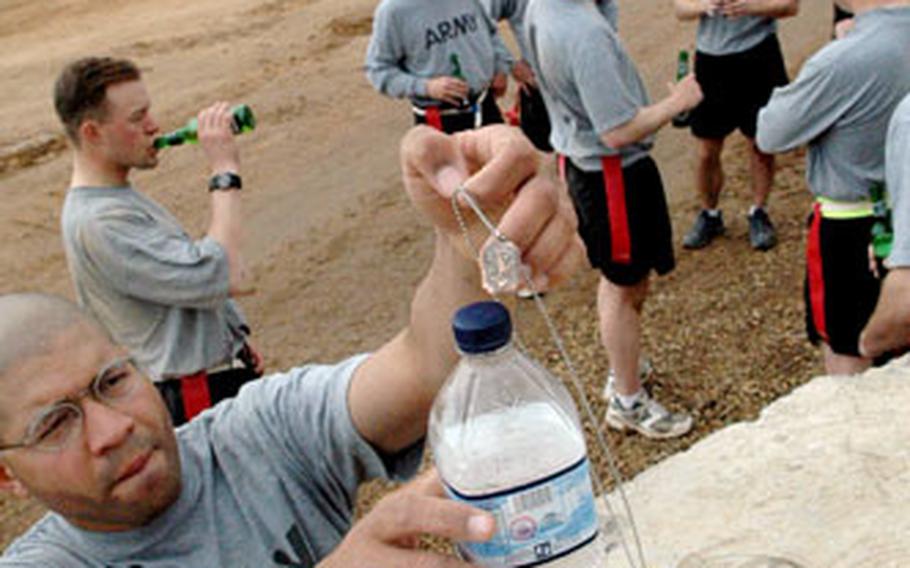 A soldier gets some water during the flag football game. Others stood on the sidelines and sipped nonalcoholic beer and cheered on teammates. (Monte Morin / S&S)

RAMADI, Iraq &#8212; It was a chilly, low-key Christmas Day for members of the Bamberg, Germany-based 54th Engineer Battalion Sunday as soldiers spoke with family members via computer video links and dined on a sumptuous holiday meal in the festively decked Camp Ramadi mess hall.

The holiday contrasted sharply with the Christmas that battalion soldiers had spent in Iraq two years earlier, when they supported the 3rd Infantry Division on its invasion drive into Baghdad.

The 54th, which belongs to the 130th Engineering Brigade, arrived in Ramadi earlier this month, where it&#8217;s primary duty has been to clear key roadways of booby traps and homemade bombs.

While most days &#8212; even major holidays &#8212; blend together in an undefined mass for most soldiers in Iraq, each member of the battalion did awake to a reminder of the day. In the dark of night, each soldier was given his own gift.

Throughout U.S. bases in Iraq Saturday, soldiers gathered for small parties and exchanged gifts on Christmas eve, while others, who were separated from both their families and their units, struggled to catch helicopters and airplanes to their bases.

The soldier, who was trying to get a space-available seat to Ramadi, said he had been waiting five days. When he finally caught a flight early Christmas morning, he grinned broadly when he was greeted by a helicopter crew chief wearing a Santa&#8217;s hat on top of his flight helmet.

Later that morning, a group of young staff officers from the 54th met for a game of flag football on the sprawling camp&#8217;s makeshift athletic field. In between downs, soldiers swigged nonalcoholic beer from bottles and cheered teammates from the sidelines.

The unit&#8217;s commander, Lt. Col. Shawn McGinley, 40, of Philadelphia, stopped by and snapped photographs of the game.

McGinley said that several missions had been planned for the day, but that they had been canceled at the last minute for various reasons.

For most of the day Saturday and Sunday, soldiers booked time for video conferences with family members back home in Bamberg. For his own part, McGinley&#8217;s holiday treat was to sleep in for another 30 minutes Sunday.

McGinley said that after about a month, soldiers were finally settled into their new home.