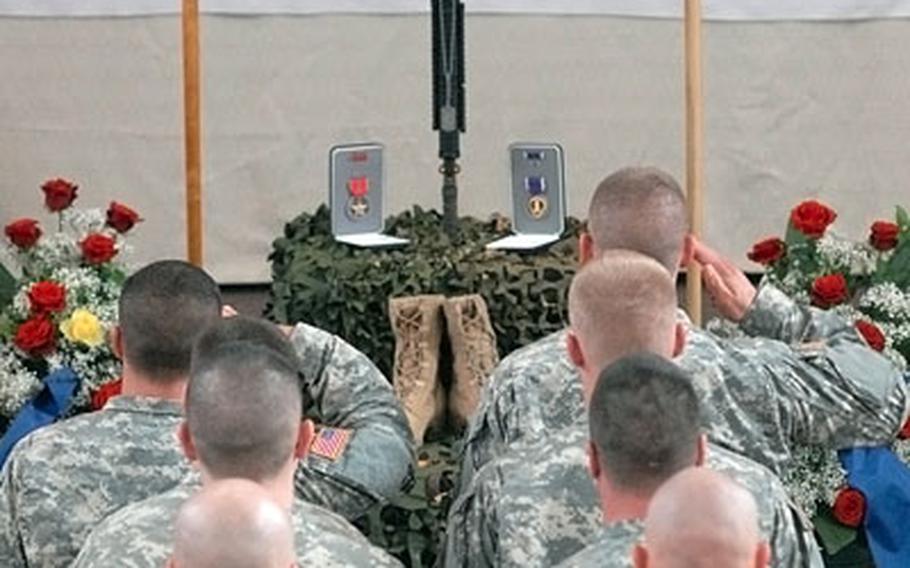 The honor guard fire volleys at the conclusion of the memorial service for Spc. Christopher Neiberger, at Ledward Barracks in Schweinfurt, Germany, on Wednesday. (Michael Abrams / S&S)

Killed instantly by a roadside bomb while patrolling as a gunner, Neiberger was remembered Wednesday in Schweinfurt, and previously in Iraq, as a man who was very careful with his words, a man whom everyone treated like a little brother.

Upon initially meeting Neiberger, his company commander in Company C, 1st Battalion, 18th Infantry Regiment &#8220;Vanguards&#8221; thought he came across as goofy and slow. While many would call the native of Gainesville, Fla., goofy, slow he was not.

He&#8217;d studied European history in college before enlisting in September 2005, and was considered a great traveling companion with a fountain of useless knowledge, read Pfc. Timothy Spencer. He had dreams of possibly becoming a teacher some day.

Neiberger had a love for his family &#8212; parents Richard and Mary Neiberger, sister Ami Neiberger-Miller and brothers Eric and Robert; for his church &#8212; he had participated in mission trips to Guatemala, Honduras and Mexico; and for his fellow soldiers, who often referred to him as Nei-Nei or Nei-Bear.

Neiberger&#8217;s sister told Lt. Col. Robert Whittle, commander of Schweinfurt&#8217;s Task Force Guardian, that her brother had always wanted to be a soldier, always playing with things that crackled and exploded while growing up.

Task Force Guardian&#8217;s chaplain, Col. James M. Brown, read words given by the Vanguard chaplain, Capt. Seth George, in Iraq, who remembered Neiberger as someone who never complained, always had an off-the- wall remark handy, and could be counted on to make the best out of any situation.

&#8220;(Neiberger) thought that indifference was everything that is wrong with humanity,&#8221; Brown read.

Richard Neiberger told his son&#8217;s leaders that he&#8217;d died believing he was making a difference.

Neiberger was the 21st Vanguard soldier killed during the present deployment. The Vanguards&#8217; higher headquarters, 2nd &#8220;Dagger&#8221; Brigade Combat Team, 1st Infantry Division, has now lost 57. Having been in Iraq just shy of one year, the 4,000-plus soldiers are due home in October.