Lithuania says statement about accepting US nuclear weapons is fake 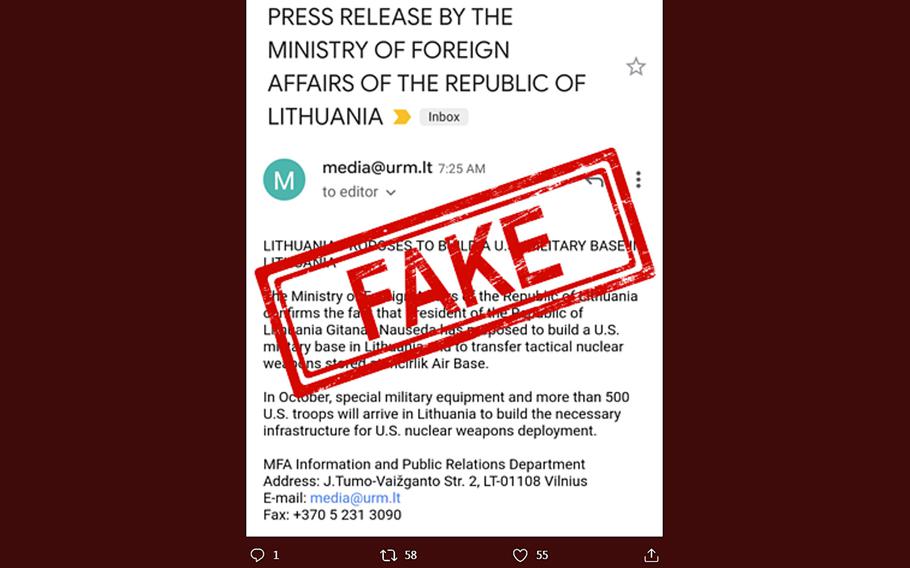 Lithuania says a press release in circulation claiming the United States is setting up a military base and storing nuclear weapons in Lithuania is a hoax. ()

STUTTGART, Germany — A “press release” swirling on social media that claims the U.S. plans to build a military base and transfer nuclear bombs from Turkey to the Baltics is a hoax, said Lithuania’s Foreign Ministry, which launched an investigation Friday into the origins of the phony report.

“Urgent information… This is a cyberattack - now under investigation by Lithuanian authorities,” the Lithuanian Foreign Ministry said in a statement posted on Twitter.

The release appeared to be delivered from a spoofed Lithuanian government email address and said 500 U.S. soldiers recently deployed were on a mission to lay the groundwork for a base in the country. It added that the mission was focused on building infrastructure so that nuclear bombs could be transferred there from Incirlik Air Base in Turkey.

This isn’t the first time fake information has circulated about U.S. and NATO missions in the Baltics.

In 2017, at the start of NATO’s multinational battlegroup deployments in the Baltics, emails were sent to local Lithuanian news outlets and government officials accusing German soldiers stationed in the country of rape. Some local news outlets reported the claims, which were later rejected by Lithuanian authorities as fake and an attempt to discredit the NATO mission.

In recent days, about 500 U.S. soldiers and their military equipment did actually begin arriving in Lithuania, where they will be on an extended deployment as part of efforts to deter potential Russian aggression in the region. However, the mission is rotational and troops will return to the U.S. in the spring.

There are no plans for a permanent base in Lithuania.

In recent years, allies have taken steps to counter Russian disinformation campaigns and efforts to undermine the NATO alliance.

NATO now has a new cyberspace operations center and intelligence division, and has hybrid warfare teams that can deploy in support of member states.

In 2017, NATO and the European Union also launched a center of excellence” in Helsinki to help allies and partners deal with “hybrid” attacks, which involve cyber and information warfare, along with political, economic and military actions. A cyber center of excellence was set up by NATO in Tallinn, Estonia in 2008, a year after that country came under extended cyber attack by the Russians.