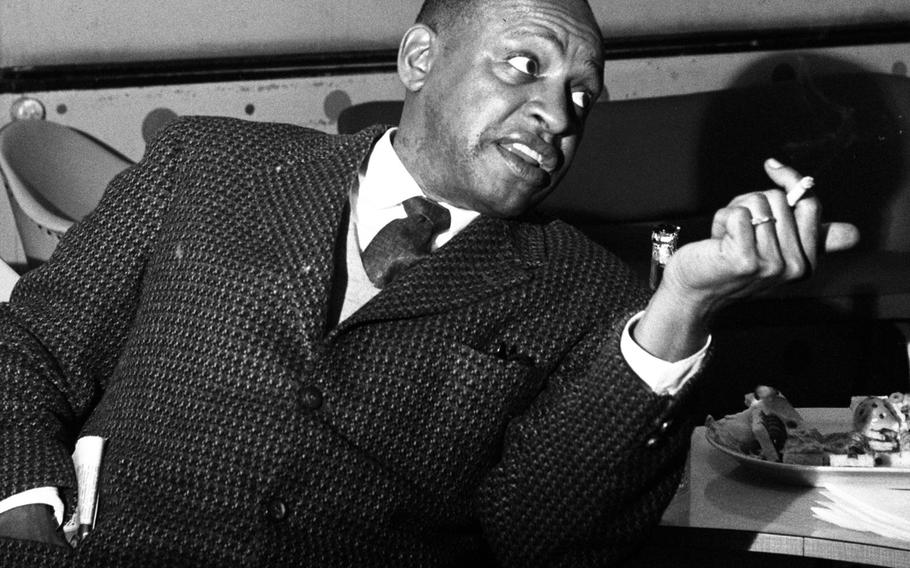 ALMOST EVERY musician in Lionel Hampton's new band — which has been rocking them from Berlin to Bern on his fifth European tour — is an ex-serviceman.

"Man, the Army camps and the air bases are crawling with musical talent," Hampton explained. "No matter where we play some cat comes over with his horn and says, 'Hamp, can I sit in?' and I tell him to go grab himself a chair."

One of Hampton's top trombone players, Louis Blackburn, who has excited jazz critics, was discovered in this manner last year when the band played at Munich.

"After I listened to this cat I said 'When Uncle's done with you give me a call,'" Hampton, recalled. "That's why my phone never stops ringing back home."

The 17 Hampton musicians are a young group. Their average age is 23 and few of them are married.

"You know, when a guy is away from home for months making one-night stands all over the map he starts to get shook up about his family back home," the jazz leader pointed out. "But a single cat has a ball. His only worry is where he can get one-day laundry service."

Hampton said there is no difference between the German and American jazz fan. When the band begins to rock the reaction is the same all over the world.

"They really flipped for us in Berlin," Hampton said. "They had to call the law in to cool the place down it was so hot."

After the crowd left the Sports Palace they started chanting a jive number Hampton is famous for called "Hey-Baba-Ree-Baa!"

"The cats on the other side of the curtain went home shouting it," Hampton said. "They tell me it shook up the Reds over there who didn't dig that stuff."

When the Lionel Hampton band was booked by the Lindsey Air Base Rocker club at Rhine-Main Halle in Wiesbaden — the club was too small to hold the 2,000 persons who wanted to see them — four Air Force generals also showed up.

One of them, Maj Gen Walter I. Miller, USAFE comptroller, has been a Hampton fan way back when the musician was playing with the Benny Goodman band.

"Me and the general had a nice little talk during the intermission," Hampton said. later. "Then he asked if we would play his favorite number, 'When the Saints Go Marching In.'"

The general could not have picked a better number according to Hampton. "We really break up the place playing that," he said.