LinkedIn to give free premium membership to military spouses 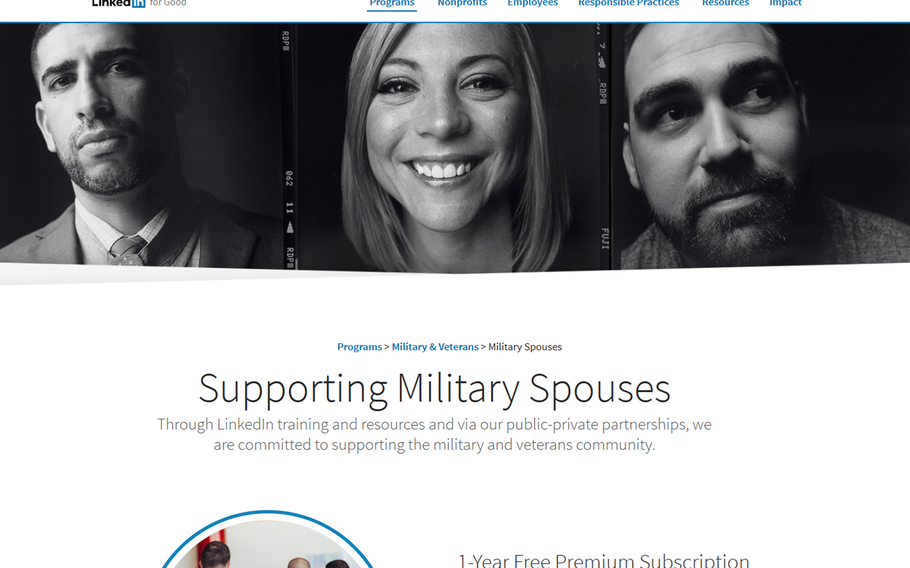 WASHINGTON — LinkedIn, a career-focused social media network, announced Monday that it would give free job-searching resources to military spouses, a population whose employment lags behind the rest of the country.

Through a partnership with the Defense Department, LinkedIn will expand its program for veterans and servicemembers to include spouses. Starting in July, it will provide spouses one year of free membership to LinkedIn Premium, which offers job seekers more search tools and online courses. Premium memberships typically range from $30 to $100 each month.

The year of free membership will be available to spouses each time that they move to new installations and again when their spouses leave the military, LinkedIn officials said.

“Faced with frequent moves and deployments, military spouses have a unique challenge when it comes to growing their careers,” LinkedIn wrote in a statement. “In order to help set them up for success, re-skilling and re-training are key, as well as identifying remote and flexible work options.”

President Donald Trump’s administration has said it would take up military spouse employment as a priority. In May, Trump signed an executive order encouraging federal agencies to hire more military spouses.

“As a federal government, if we are going to be working with our private sector and asking for others to hire military spouses, we need to lead by example,” Jennifer Korn, a special assistant to the president, said at the time.

The frequent moves, often with little notice, are viewed as the biggest challenges facing military spouse employment. Spouses often must quit their jobs and face long periods of unemployment or underemployment after they move, according to the Chamber of Commerce.

In addition to the free premium memberships, LinkedIn created a source page for military spouses with lessons on freelancing and working remotely. The social media network is also trying to create an online forum for military spouses to give and take career advice and tips on finding jobs.

LinkedIn officials said they plan to partner with the Department of Veterans Affairs to provide free LinkedIn Premium membership to spouses of troops killed on active duty, as well as caregivers to wounded veterans. They did not offer a timeline of when resources would be expanded to include those people.