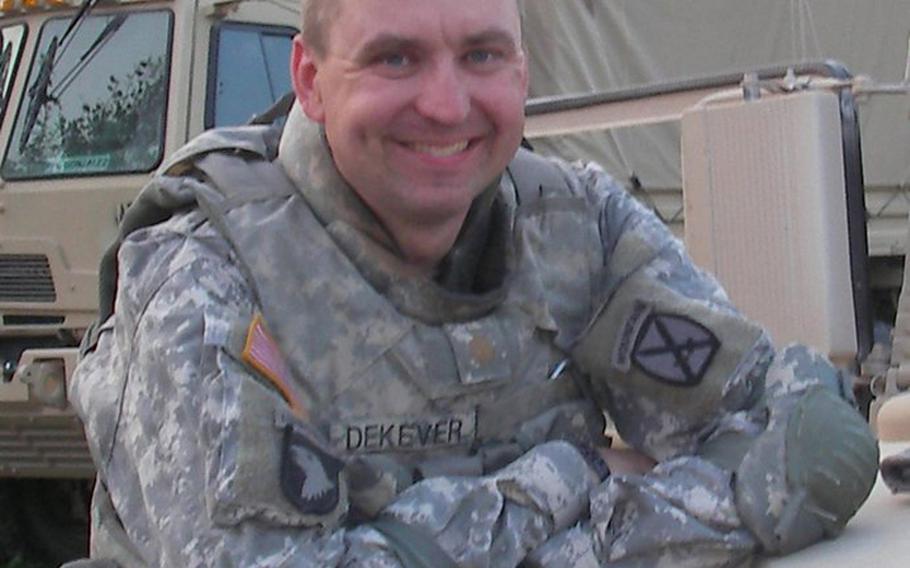 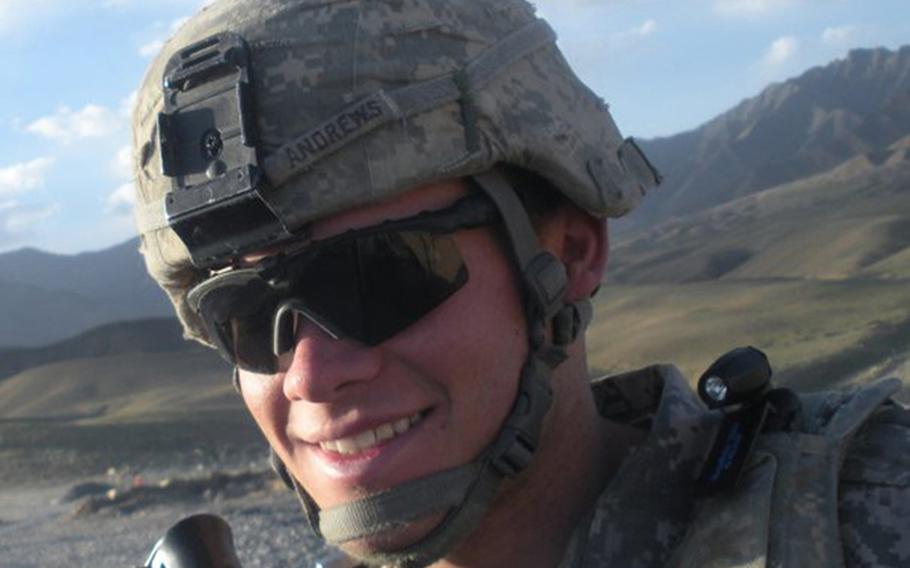 Former Army Spc. Jacob Andrews in a photo taken during his deployment to Afghanistan during 2009. Andrews committed suicide in April 2011 shortly after he was kicked out of the Army amid a confluence of mental health issues and behavioral problems. Now, Maj. Andrew DeKever is campaigning for the service to issue Andrews, posthumously, a combat infantryman badge and a Purple Heart. (Courtesy of Lauri Turner) 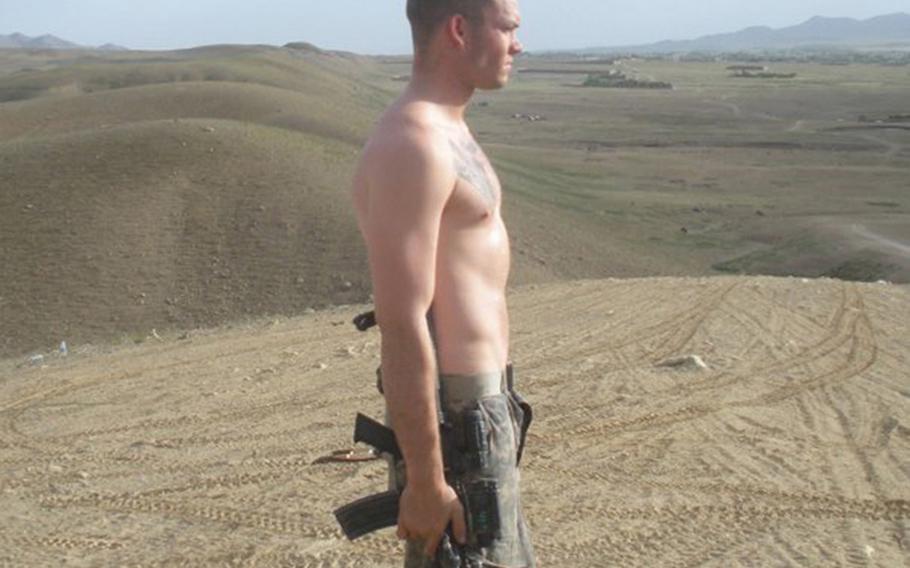 Former Army Spc. Jacob Andrews Andrews in a photo taken during his deployment to Afghanistan during 2009. Jacobs committed suicide in April shortly after he was kicked out of the Army amid a confluence of mental health issues and behavioral problems. Now, Maj. Andrew DeKever is campaigning for the service to issue Andrews, posthumously, a combat infantryman badge and a Purple Heart. (Courtesy of Lauri Turner) WASHINGTON &mdash; Spc. Jacob Andrews and Maj. Andrew DeKever served in the same brigade in Afghanistan in 2009. Separated by rank, role and age, they never met, but both men returned from war with psychological wounds.

One sought help and recovered. The other was abandoned by the Army and hanged himself.

The survivor, DeKever, first heard of Andrews in a Stars and Stripes article he read last summer. He felt drawn to Andrews, an infantryman who had turned 21 in Afghanistan and been in at least 20 firefights. The more DeKever learned, the more he came to believe that Andrews had been wronged and the more he felt compelled to fight for him. He couldn&rsquo;t bring Andrews back, but he could do something. He made it his mission to get Andrews a posthumous combat infantryman badge and Purple Heart, both denied him by the Army but which someday might help Andrews&rsquo; son understand the tragic death of the father he never met.

Suffering from post-traumatic stress disorder after his combat deployment ended in January 2010, Andrews drank heavily. He got in trouble repeatedly, for drinking, driving under the influence and arguing with superior officers. By September 2010, he was discharged for misconduct.

Seven months later, in April, Andrews hanged himself with a climbing rope in a wooded area near his childhood home in Kansas City, Mo. He left behind his parents and his girlfriend, Ashely Mercante, who was pregnant.

DeKever was older. He&rsquo;d been 36 in Afghanistan, where he&rsquo;d served as the brigade support operations officer, a job that included overseeing a mortuary affairs team that handled more than 100 dead bodies during his time in the country. The cumulative effect of dealing with so much death up close tore him apart inside. By the end of his tour, he was fantasizing about his own demise.

Back at Fort Drum, N.Y., things grew worse, but eventually he checked himself into a hospital. After eight months of PTSD therapy and antidepressants, and with the support of his wife and young son, he got better. He wrote an article about his experience for his college alumni magazine.

The Army sent him to an advanced military school at Fort Leavenworth, Kan., and he prepared to take command of his own battalion.

Then he read about Andrews.

How much separated him from the younger soldier? How might things have turned out differently had he been in the younger man&rsquo;s shoes, with less rank and less maturity?

DeKever kept thinking about Andrews&rsquo; unborn child. Mercante, he learned, was back in Watertown, N.Y. She was expecting a boy, whom she planned to name after his father.

DeKever thought of a line in the Stars and Stripes article about how Andrews had been the only soldier in his unit not to be awarded the combat infantryman badge. While his fellow soldiers in Company D, 2nd Battalion, 87th Infantry Regiment, made it clear he had qualified for it, his commanders had apparently declined to put him in for it after he started to get in trouble.

Whatever else he had done, DeKever decided, Andrews had earned that badge under fire.

Throughout the autumn, DeKever met with Andrews&rsquo; family several times. He formed a connection. It turned out that his wife, Mary, had graduated from the same high school Andrews&rsquo; girlfriend, Mercante, had attended.

Meanwhile, he started contacting soldiers from Andrews&rsquo; old platoon, asking them if they&rsquo;d write and sign affidavits attesting to the combat that Andrews had seen in Afghanistan.

His former platoon leader, Kyle Hooten, was out of the Army and managing a Target store in Los Angeles. He signed three sworn statements describing three battles in detail and attesting that he had &ldquo;personally observed &hellip; [Andrews] &hellip; engaging the enemy while dismounted under fire&rdquo; in multiple instances.

Hooten wrote as well that he estimated Andrews was involved in &ldquo;15 to 20 other direct fire engagements.&rdquo;

Her son, whom she tends to refer to as Baby Jake, &ldquo;looks so much like Jake it&rsquo;s crazy,&rdquo; Mercante said. &ldquo;His eyes, and his looks sometimes. He&rsquo;ll do this raised eyebrow thing and I&rsquo;m like, &lsquo;How can you do that? You&rsquo;re a baby.&rsquo;&rdquo;

After her son&rsquo;s birth, she and her 18-year-old sister moved into a separate apartment in the two-family house that her mother and her mother&rsquo;s boyfriend live in. Andrews&rsquo; mother, Lauri Turner, spent three weeks visiting, and was there for the birth.

Mercante is 23. She graduated from nursing school last year, but was unable to take her licensing exam because it was scheduled for the same day as Andrews&rsquo; funeral.

&ldquo;I&rsquo;m going to take it,&rdquo; she said. &ldquo;I feel like I want things to calm down first, but I don&rsquo;t think at this point they&rsquo;re really going to.&rdquo;

The VA recently ruled that Andrews had been 80 percent disabled as a result of PTSD, TBI and other physical injuries, so Mercante should begin to receive a monthly disability payment shortly. In the meantime, DeKever donated the fee for writing his magazine article to Mercante. His friends and family started sending Wal-Mart gift cards to her to use for baby supplies.

Andrews&rsquo; old battalion, including many friends he&rsquo;d served with in combat, returned to Afghanistan this fall. The officers under whom he served, however, have moved on. His battalion is now under the command of Lt. Col. Greg Anderson.

&ldquo;I am asking for your support,&rdquo; DeKever wrote. &ldquo;Sir, although PTSD can&rsquo;t fully excuse Jake&rsquo;s disciplinary problems ... it certainly is enough of a mitigating factor to no longer deny him his CIB.&rdquo;

A day later, he heard back via email from the battalion executive officer, Maj. Arieyeh J. Austin, that Anderson would support the effort.

Anderson declined comment for this story. Approval for the combat badge now requires the recommendation of higher-level commanders. Eventually it will wind its way to the Awards and Decorations Branch at Army Human Resources Command in Fort Knox, Ky.

DeKever said he hopes to hold a ceremony, &ldquo;so it&rsquo;s not just sent in the mail or anything like that.&rdquo;

He isn&rsquo;t finished, he said. The next step is to put Andrews in for a Purple Heart, which DeKever argues he is is entitled to based on traumatic brain injury.

Early next year, DeKever expects to be promoted to lieutenant colonel. He and his family will be be transferred to Alaska, where he will take command of a battalion.

He&rsquo;s still close with Andrews&rsquo; family. They email or text a few times a week.

One weekend in December, he joined them for the Wreaths Across America project, placing 800 wreaths at soldiers&rsquo; graves at the national and base cemeteries at Fort Leavenworth. They visited Andrews&rsquo; grave as well as the final resting place of a soldier named Sgt. Aaron Smith, who was shot to death by a turncoat Afghan National Police officer in October 2009, and whose body DeKever had tended to in Afghanistan.

She said she hopes someday to explain to her grandson that his father&rsquo;s legacy is more about what he did in life than how he died. Perhaps having the badge and medal will make it more understandable.

&ldquo;He&rsquo;s going to know the truth about how his dad died one day, but maybe it will help him with the way he feels about his dad,&rdquo; Turner said. &ldquo;Jake died of combat wounds. He was a hero.&rdquo;