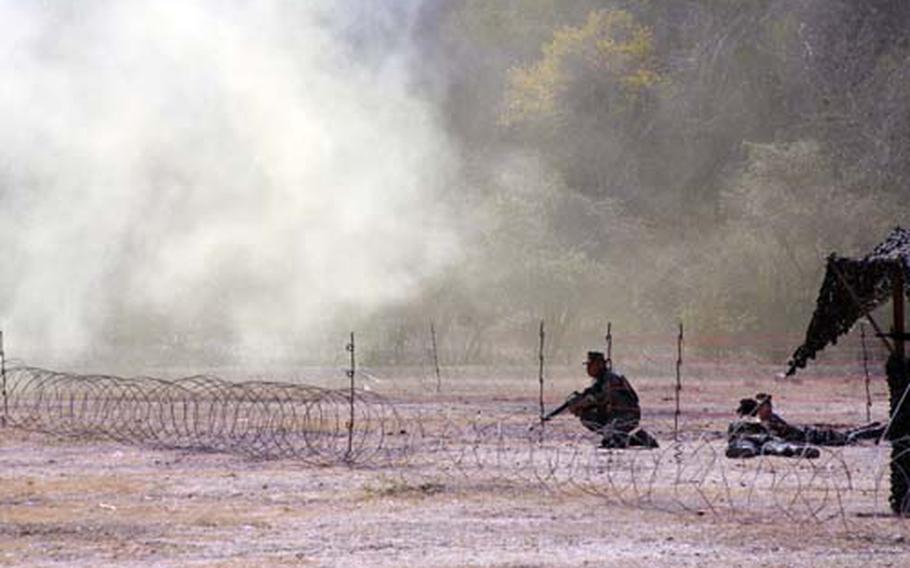 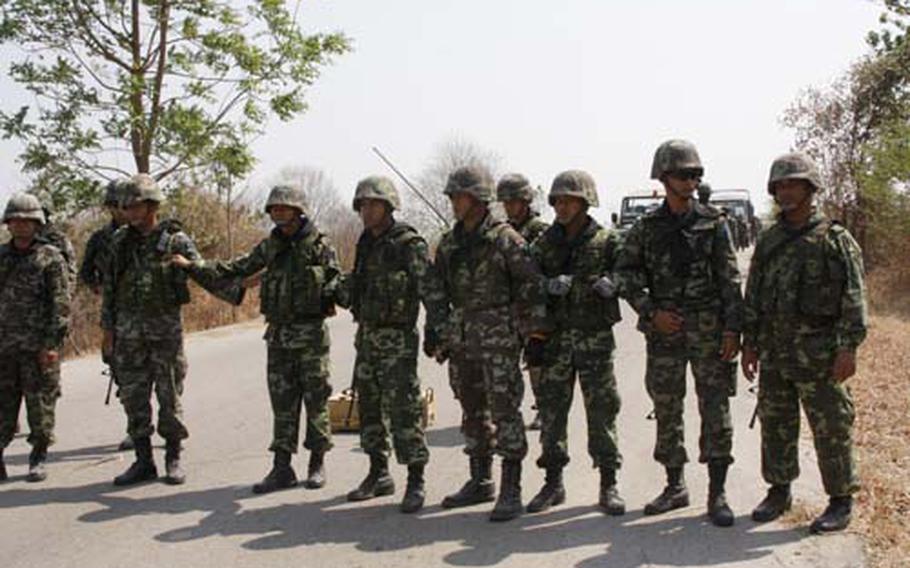 Mock protesters and Royal Thai Army soldiers square off Feb. 9 in Lop Buri, Thailand, for access to U.N. humanitarian aid -- one of the many training missions of Cobra Gold ’09. (Kevin Baron / S&S) 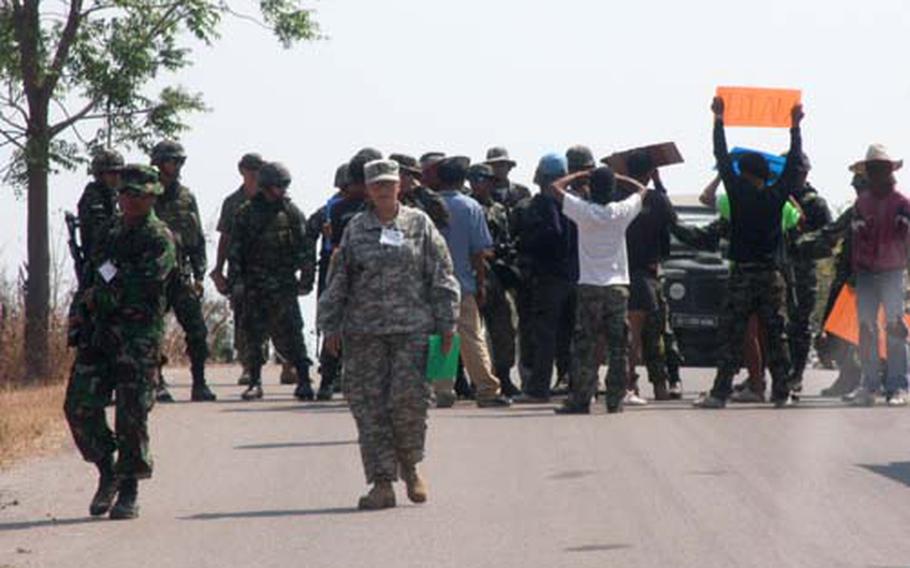 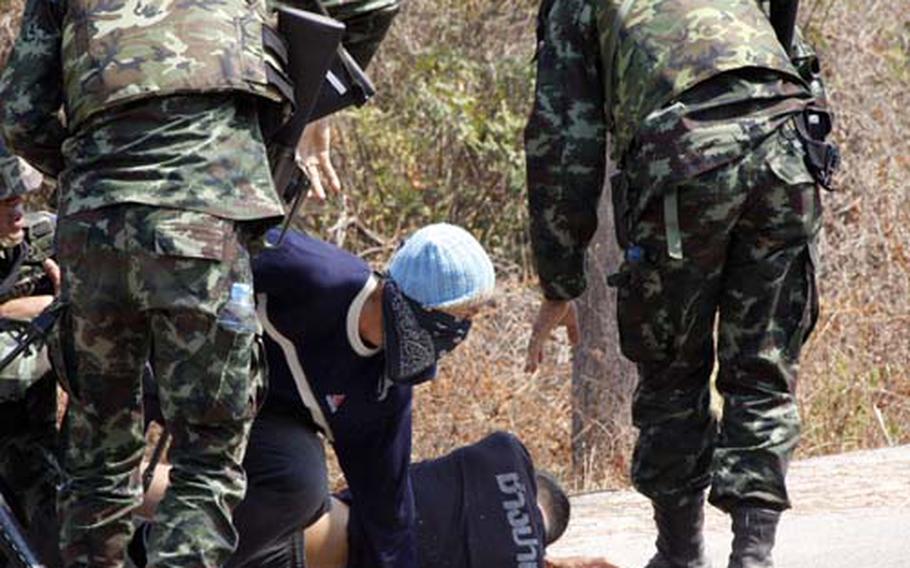 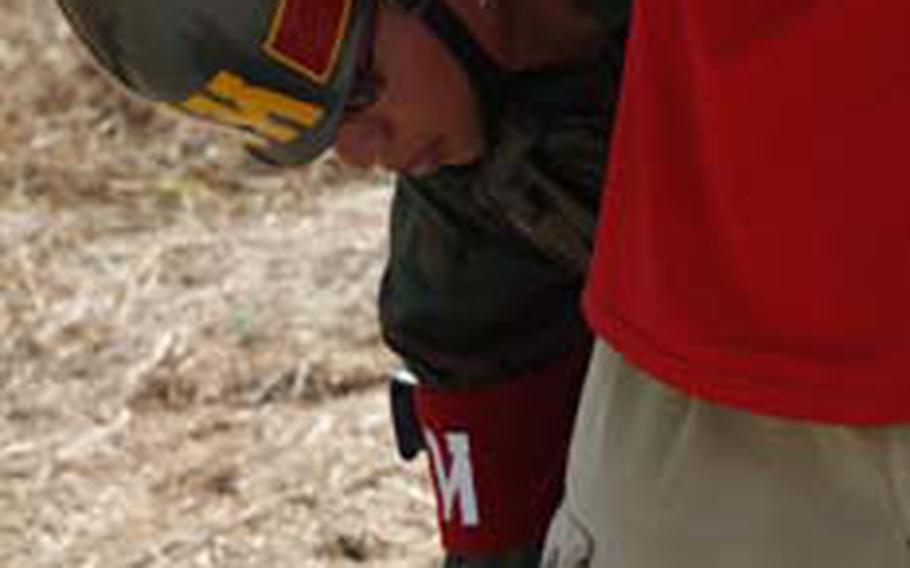 CHIANG MAI, Thailand &#8212; While Washington is focused on the new administration, Iraq and starting anew in Afghanistan, Cobra Gold &#8217;09 commanders said they are "challenged" by the limited remaining resources to put on the largest multinational joint training exercise in Southeast Asia.

Indeed, Pentagon leaders have spent much of the winter waging a public campaign to frame expectations of the "Global War on Terrorism" with little mention of the Pacific.

But from commanding general to corporal, the more than 7,000 U.S. troops who gathered in Thailand this month for the 28th iteration of the venture said the coalition operations being taught here are more relevant than ever.

Connecting those messages hasn&#8217;t been easy.

Like every senior officer here, Wilson said he appreciates the requirements of the wars downrange.

"I don&#8217;t think you can undersell those [experiences]," he said sitting in his Cobra Gold office, a converted 12th-floor hotel room overlooking the centuries-old city of Chiang Mai.

Wilson has worked in the Asia-Pacific region nearly his entire career, shuttling back and forth to Hawaii from his civilian job as an assistant school superintendent in Utah. He is an educator who knows the value of bringing together thousands of young men and women from different nations to bridge cultural divides and forge new friendships, year after year.

In Washington, that refrain has taken on a renewed urgency. Defense Secretary Robert Gates and Gen. David Petraeus, head of the U.S. Central Command, have said repeatedly that in Iraq, Afghanistan or Pakistan, U.S. military power alone will not foster stable and peaceful countries.

Last week, Adm. Mike Mullen, chairman of the Joint Chiefs of Staff, wrote that it will take decades for the U.S. military to win the trust of those nations that it had little interaction with just a few years ago.

For those at Cobra Gold, that sounds a bit like preaching to the choir.

That job falls to Lt. Gen. Benjamin Mixon, commanding general of U.S. Army Pacific and senior American at Cobra Gold. Mixon said his primary responsibility is the training and oversight of everyone in PACOM heading into deployments downrange, and at Cobra Gold that means putting U.S. personnel through live-fire engagements as well as real-life goodwill missions for local Thai communities.

Officially, the Pentagon calls this work "Phase Zero" or "pre-engagement." It is the idea that the military, too, must engage in relationship-building efforts practiced by diplomats and international development workers.

Mixon repeatedly stressed to his commanders that the "soft power" aspects of Cobra Gold are just as important as practicing coalition warfare and tactical operations. Across Thailand, U.S. servicemembers this month built schools and medical facilities, refurbished an orphanage, treated sick civilians, pulled rotten teeth, and even sent veterinarians to see farm animals.

"It doesn&#8217;t always have to be a huge exercise. It&#8217;s individuals," said Mixon, who likened Cobra Gold to an exchange program for soldiers.

"When it&#8217;s got an American face on it, that&#8217;s pretty powerful," he told senior joint commanders aboard the amphibious assault ship USS Essex in the Gulf of Thailand last week.

As a result, the U.S. enjoys a solid foundation of three decades worth of pre-engagement in Southeast Asia.

The U.S.-Thailand partnership dates back more than 100 years, commanders are quick to note. The Treaty of Amity and Commerce of 1833 with what was then called Siam was the first U.S. agreement in Asia.

Today, from sitcoms to Starbucks, American culture is pervasive throughout the royal kingdom.

Several Americans at Cobra Gold described how they have become friends with their Asian counterparts, met their families, stayed in their homes and grown to love the country.

Some have more than 10 Cobra Golds to their name. A few said they plan to live in Thailand after their service.

"The staff sergeant down in Phitsanulok from the New York Army National Guard who has met the Thai sergeant major on range Bravo during the Stryker gunnery is probably going to stay in touch," said Col. John Hansen, chief of the training and exercises division, USARPAC, Fort Shafter, Hawaii. "When they go back home, those connections remain."

Already, a generation of U.S. military leaders who served in the Pacific Command, which covers about half the surface area of the globe, has witnessed a small bilateral operation grow into a massive undertaking.

A recent editorial by Mullen in The Washington Post read in part: "A whole generation of Pakistani military officers either doesn&#8217;t know the United States, doesn&#8217;t trust us or both."

Mullen argued that U.S. policies cutting off Pakistan military aid for a dozen years, in effect, had cut us off from that country&#8217;s leaders. Now the U.S. has the hard job of making new connections there.

In Thailand, connections happen a bit more naturally: over dinner. Near the town of Phitsanulok this month, a meal with Cobra Gold participants from Thailand and the New York National Guard turned into a sharing session on counter-IED experiences and methods. The Thais became "very inquisitive about Iraq," said Maj. Chris Daniels, the guard detachment&#8217;s liaison, asking their American counterparts how to spot IEDs and react to them, and what countermeasures the U.S. had developed.

The Thai soldiers especially were interested to learn that Americans call for helicopter evacuations of casualties much more rapidly than the Thais do. As a result, at the Thai&#8217;s request, the Americans added more casualty evacuation training to the program on the fly.

Over the years, the training docket has evolved in similar ways. Recently, militaries in this region have had to manage global responses to natural disasters, the 2004 tsunami still fresh in the Thai national psyche.

Sharing those lessons learned among partner nations, and the exposure it brings U.S. troops, pleases Mixon.

"The level of leadership and initiative that they demonstrate across the combined staff has really impressed me," Hansen said. "They&#8217;ve gone from really being observers, and being very curious to learn techniques and procedures at the operational staff level, to leading about half of the directorates of the staff."

Every U.S. commander with previous Cobra Gold experience said Southeast Asian armed forces are better prepared than ever to lead a military coalition in response to whatever crises may arise here so the U.S. does not have to.

"Everybody agrees, and certainly from the U.S. perspective, we don&#8217;t want to do anything as an independent. We always want to get the people who live in the region [involved]," Mixon said.

There is no NATO equivalent here, he likes to say. The U.S. instead relies on a series of bilateral treaties across the Pacific.

Of the seven "mutual defense treaties" the U.S. holds worldwide, five are in Asia and all of them are bilateral. Mixon said he hopes the Association of Southeast Asian Nations, or ASEAN, the regional economic and security pact, will take on much of burden. But there are plenty of other threats here that have USARPAC&#8217;s attention.