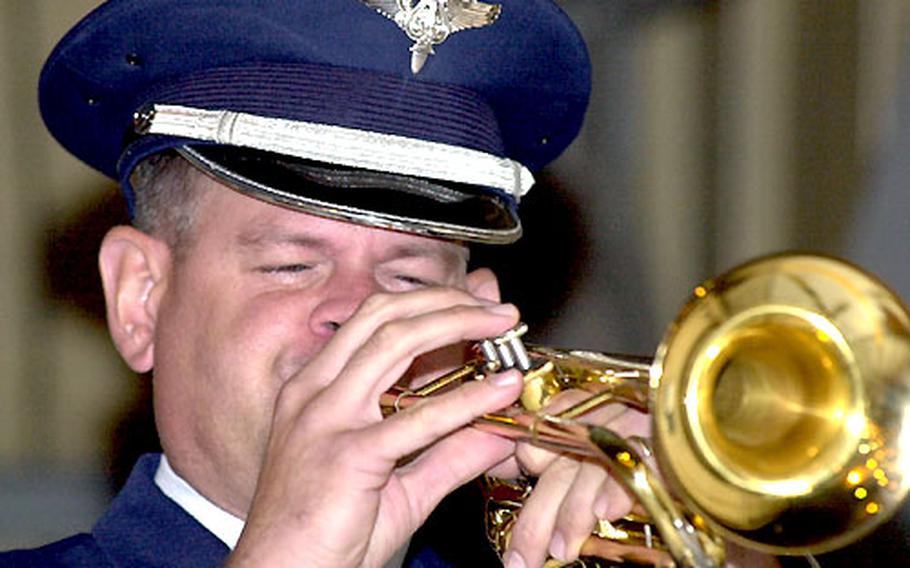 Master Sgt. Keith Hansen, a member of the Pacific Air Forces Band-Asia at Yokota Air Base, plays taps during a repatriation ceremony at the base Tuesday night. (Jennifer H. Svan / S&S)

Master Sgt. Keith Hansen, a member of the Pacific Air Forces Band-Asia at Yokota Air Base, plays taps during a repatriation ceremony at the base Tuesday night. (Jennifer H. Svan / S&S) 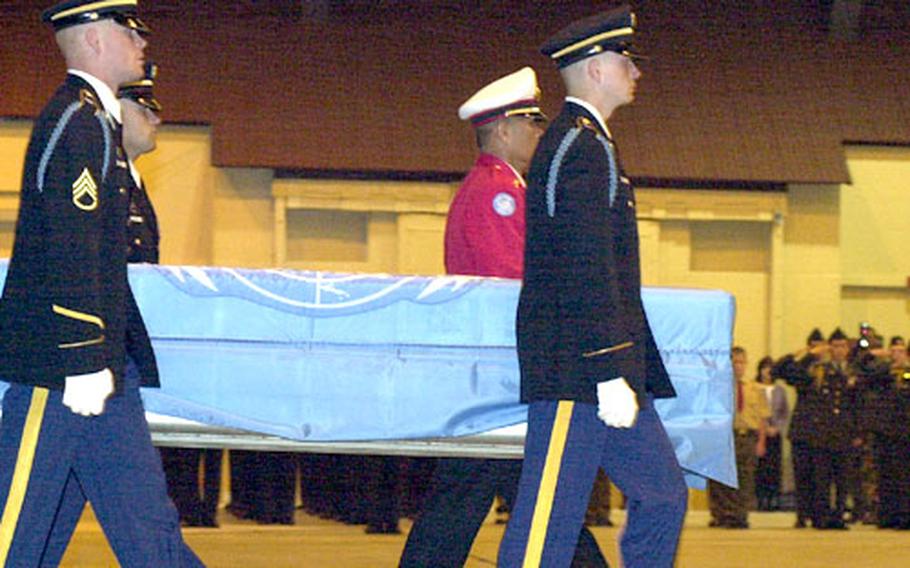 Members of the U.N. Command Honor Guard from Yongsan, South Korea, carry a casket holding what are believed to be remains of a missing GI from the Korean War. (Jennifer H. Svan / S&S)

YOKOTA AIR BASE, Japan &#8212; Eight sets of bones believed to be from U.S. soldiers missing in action in the Korean War received a hero&#8217;s welcome at a United Nations Command repatriation ceremony here Tuesday night.

Under a steady drizzle, the remains from North Korea were carried individually in aluminum caskets from a C-130 cargo plane into Hangar 15; more than 300 servicemembers, retirees, civilians and other community members paid their final respects to the war dead.

The bones were to be flown to Hickam Air Force Base, Hawaii, on Wednesday morning for a second ceremony, Yokota officials said. Army forensic scientists then will attempt to identify the U.S. soldiers.

When those talks are timely and the weather cooperates, a full year usually yields five digs and five repatriation ceremonies, he said, adding, &#8220;This year, we had two separate searches but only one ceremony.&#8221;

The bones repatriated at Yokota were found during digs earlier this year at two locations: near the Chosin Reservoir and about 60 miles north of Pyongyang in Unsan County.

The remains from the Chosin Reservoir are believed to be those of U.S. Army soldiers from the 7th Infantry Division who fought against Chinese forces from November to December 1950, according to a Joint POW/MIA Accounting Command news release. About 1,100 Americans are unaccounted for from Chosin campaign battles.

Unsan County was the site of fighting between communist forces and the U.S. Army&#8217;s 1st Cavalry and 25th Infantry Divisions in November 1950.

Of the 88,000 U.S. servicemembers missing in action from all conflicts, more than 8,100 are from the Korean War. Officials at Tuesday&#8217;s ceremony did not have with them statistics on how many sets of remains from the Korean War have been identified since recovery operations began in 1996.