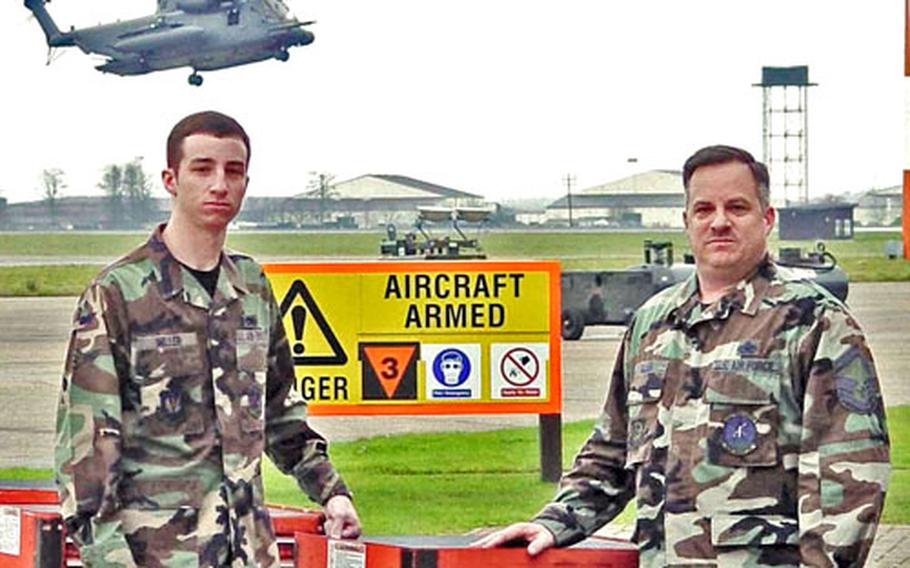 RAF MILDENHALL &#8212; One of the greatest hardships of military life is separation from family. Overseas duty stations, lengthy deployments and timely schooling can add up to months, if not years, away from loved ones.

One lucky airman found a way around that obstacle: The kids enlisted and followed him around the Air Force.

RAF Mildenhall is John Miller&#8217;s seventh duty station in his 22-year career with the Air Force and the third time he has been overseas. His son, by contrast, got to have Mildenhall as his first assignment.

Compounding the long odds that the two would share a station is the fact that Michael Miller did not request to serve in England, instead preferring to launch his career at bases in the U.S.

Today, though, as he gets a second go-around to spend time with his father, the 20-year-old said he feels blessed to enjoy this unusual opportunity.

Father, who manages the mechanics who maintain the unit&#8217;s MH-53 helicopters, and son, who helps keep the 100th Maintenance Squadron humming, hang out just about every weekend.

Serving with one of his children is not new for John Miller, a Biloxi, Miss., native. Miller, who recently was promoted to chief master sergeant, has once before shared space with a former dependent at an Air Force base.

A few years ago, he was stationed at Langley Air Force Base, Va., while his stepdaughter, Staff Sgt. Christina Bell, served at the same base.

It&#8217;s unclear what the chances are that Bell will join her brother and father at Mildenhall, a possibility complicated by her upcoming enrollment in school. The 27-year-old Air Force weather forecaster is set to enroll in Officer Training School this summer.

John Miller boasted of her accomplishments.

Bell acknowledged with jest that her ascension to the officer&#8217;s ranks will make for some unconventional family dynamics.