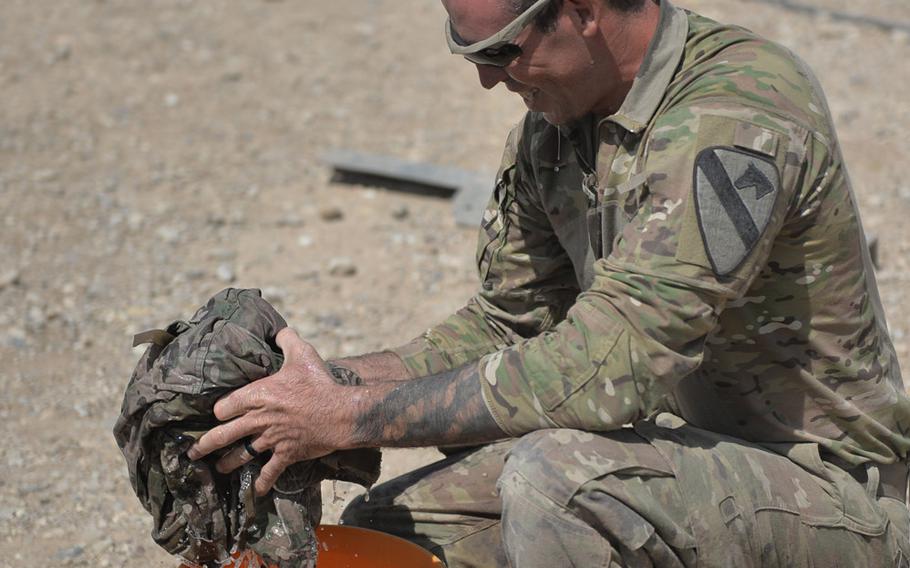 Spc. Gary Bartnik, a Paladin howitzer crew member, washes laundry on the artillery firing line at a joint tactical base near the northern Iraq town of Tal Afar on Sunday, Aug. 27, 2017. (Chad Garland/Stars and Stripes)

Spc. Gary Bartnik, a Paladin howitzer crew member, washes laundry on the artillery firing line at a joint tactical base near the northern Iraq town of Tal Afar on Sunday, Aug. 27, 2017. (Chad Garland/Stars and Stripes) 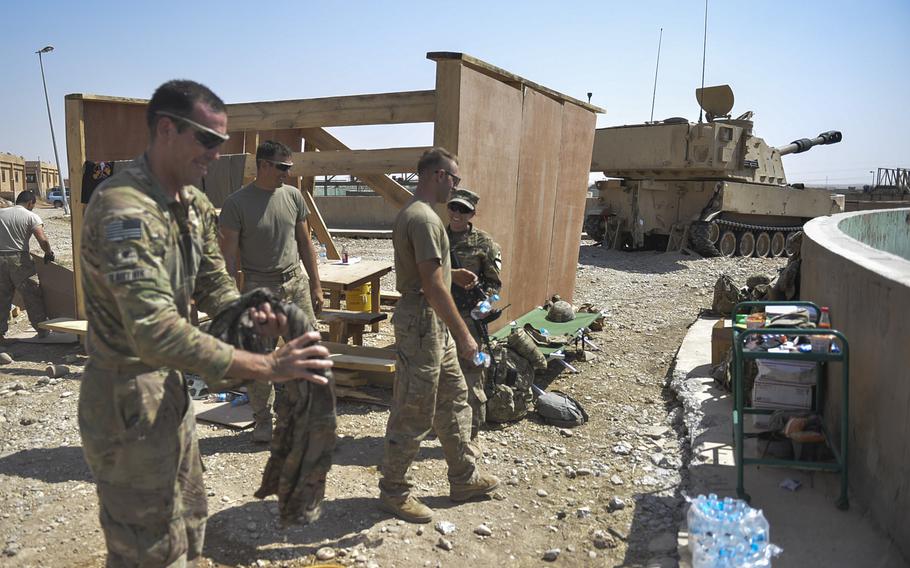 Paladin howitzer crew members prepare to roll out to a new location from their tactical base near the northern Iraq town of Tal Afar on Sunday, Aug. 27, 2017, as Spc. Gary Bartnik finishes up his laundry. (Chad Garland/Stars and Stripes) 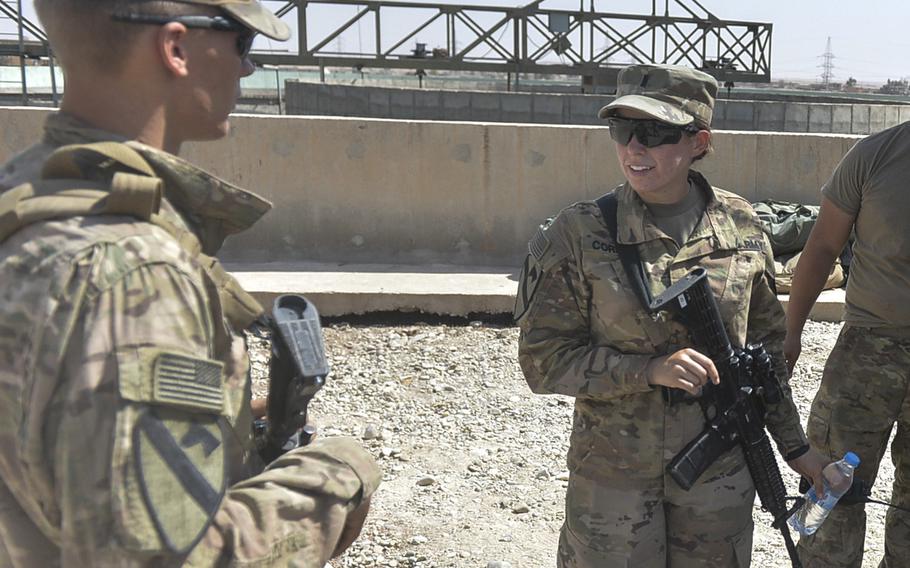 First Lt. Kirsty Cordes, commander of a platoon of Paladin self-propelled howitzers, speaks to one of her soldiers at a base near Tal Afar in northern Iraq, as the crews prepare to relocate to a new location to better support Iraqi forces fighting the Islamic State on Sunday, Aug. 27, 2017. (Chad Garland/Stars and Stripes) 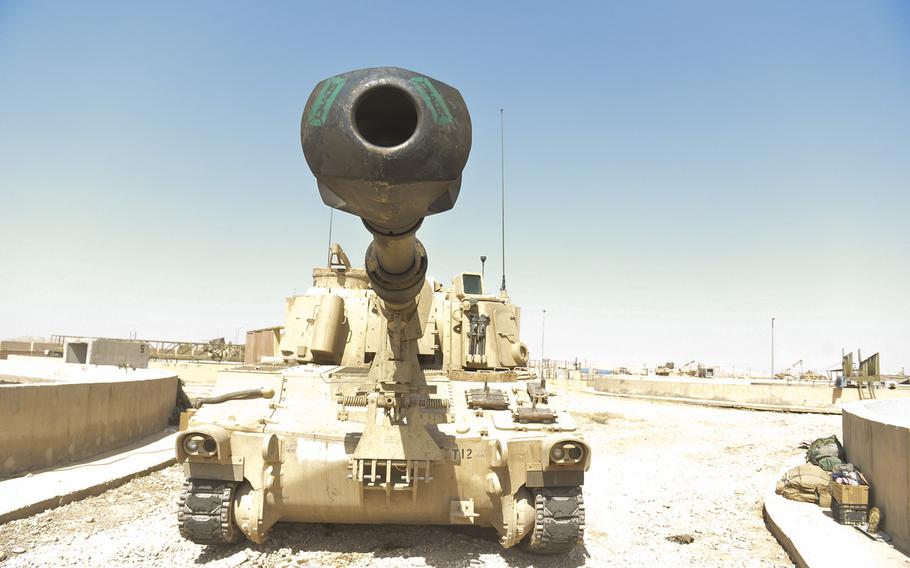 A Paladin self-propelled 155mm Howitzer sits on the firing line near Tal Afar in northern Iraq on Sunday, Aug. 27, 2017. Gun crews were preparing to move to a new location to support Iraqi units fighting the Islamic State. (Chad Garland/Stars and Stripes) 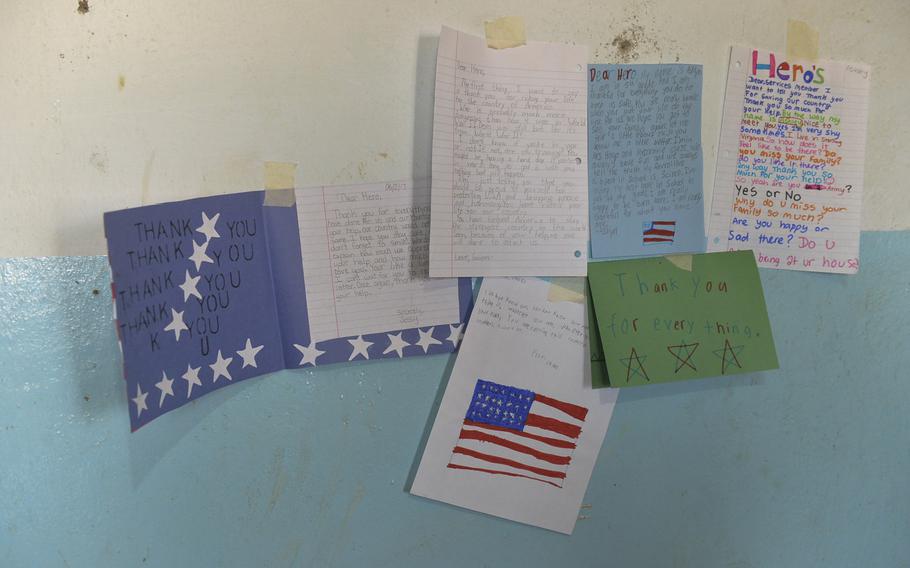 Letters from children back home in the U.S. are taped to a wall in a makeshift office at a tactical base near the northern Iraq town of Tal Afar on Sunday, August 27, 2017. The office belonged to Lt. Col. James Downing and his executive officer, Maj. Charles Schaefer, who advised Iraqi forces reclaiming outlying areas surrounding Tal Afar from the Islamic State. (Chad Garland/Stars and Stripes)

NEAR TAL AFAR, Iraq — During the grinding battle to retake Mosul from the Islamic State group, U.S. advisers to the Iraqis often settled in at tactical bases near the front for several weeks, but the fast-moving fight for Tal Afar — one of the last ISIS bastions in Iraq before being liberated Thursday — put their agility to the test.

Less than 20 miles from Tal Afar, on the eighth day of the Iraqi-led offensive, a whirlwind spun a column of dust across a field, but the U.S. artillery firing line was still. A crew member from a Paladin self-propelled howitzer washed laundry in a bucket, teased by a peer who dumped water on his head.

Nothing would remain damp long in the baking heat, though, which was fortunate for Spc. Gary Bartnik. Sometime after he’d started the wash, the platoon was ordered to move out again, about two weeks after rolling in.

Coalition troops were being repositioned to support their partners better after Iraqi Security Forces swiftly routed ISIS militants from Tal Afar, located about 25 miles from the border with Syria, and pursued hundreds to a village to the northwest. Days later, in the middle of its second week, the battle would be declared over.

The Iraqi offensive, planned and launched less than two months after a punishing, nearly 270-day battle in Mosul, impressed some U.S. advisers. It may also have caught ISIS flat-footed, causing them to fold and run, said Col. Charlie Costanza, a coalition deputy commander in Irbil.

But even before the battle had started, preparations for it required soldiers to adapt on the fly. Lt. Col. John Hawbaker, a commander within the 82nd Airborne Division’s 2nd Brigade Combat Team advising Iraqi forces, said he was planning to turn left when leading his unit’s relocation from a tactical base south of Mosul, where it had supported federal police forces, but at the last minute he was told to turn right to support the Iraqi army’s 16th division outside Tal Afar.

“I’m happy to see the flexibility and agility of my paratroopers,” the Bensenville, Ill.-native said. “They didn’t bat an eye.”

In a matter of hours, they set up a new outpost at this previously unknown location as if they’d planned it all along, he said. Such last-minute changes have become commonplace. One soldier balked at advanced warning when Hawbaker briefed the paratroopers about another anticipated move over the weekend.

“Sir, that’s almost 48 hours away,” Hawbaker recalled him joking. “Why are you giving us so much notice?”

For Lt. Col. James Downing, another 82nd Airborne Division commander and adviser here, the fast-paced battle kept him and his team on the move. They put in a string of six 22-hour days early in the battle while supporting the Iraqi army’s 15th Division.

The division moved almost daily, some days retaking up to three outlying villages at a time, even in the face of “significant ISIS presence,” Downing said. U.S. advisers helped plan each day’s maneuvers, traveled from the tactical base to accompany Iraqi leaders near the front, then traveled back to help plan again.

“We’ve got to go wherever our partners need us,” he said.

If the relentless nine-month Mosul battle could be likened to a marathon, Tal Afar may have been a sprint. But, Downing said, it was more akin to a 400-meter dash — one of the longer sprint events.

Such a quick pace sometimes made it harder for the U.S. artillery task force to stay cognizant of where friendly forces were on the rapidly changing battlefield.

“Wide open spaces have proven a challenge,” said Lt. Col. Dan Gibson, the task force commander, who said the fight in northern Nineveh province was often measured not in city blocks, as in Mosul, but in square kilometers. “They’re able to move much faster.”

Gibson, who would soon complete his sixth deployment to Iraq since 2004, said there’s still a “long row to hoe” in the anti-ISIS battle--militants still control about 10 percent of the country--but “we’re well on our way.” He’s seen improvement in the Iraqi troops, he said. “They’re competent. They’re confident. They’re motivated.”

Back among the dried-up sedimentation tanks, Lt. Kirsty Cordes, commander of the Paladin platoon, said busy days in the fight were full of back-to-back missions. Many were counterfiring against the ISIS’ batteries of mortars and rockets.

The 1st Cavalry Division crews rotated on and off duty, living at their vehicles for 48 hours at a time, followed by 24 hours of rest, during which they’d watch movies, call home or play cards.

But she and the other “gun bunnies” like the austerity here. They get the most satisfaction from being able to “shoot a lot, get dirty and do our jobs.”

They’d moved only three times since arriving in Iraq in May, but repositioning again wouldn’t keep them from shooting for long. Once they “download” their 155 mm guns into a new position and establish communications with higher headquarters, they’re ready to fire.