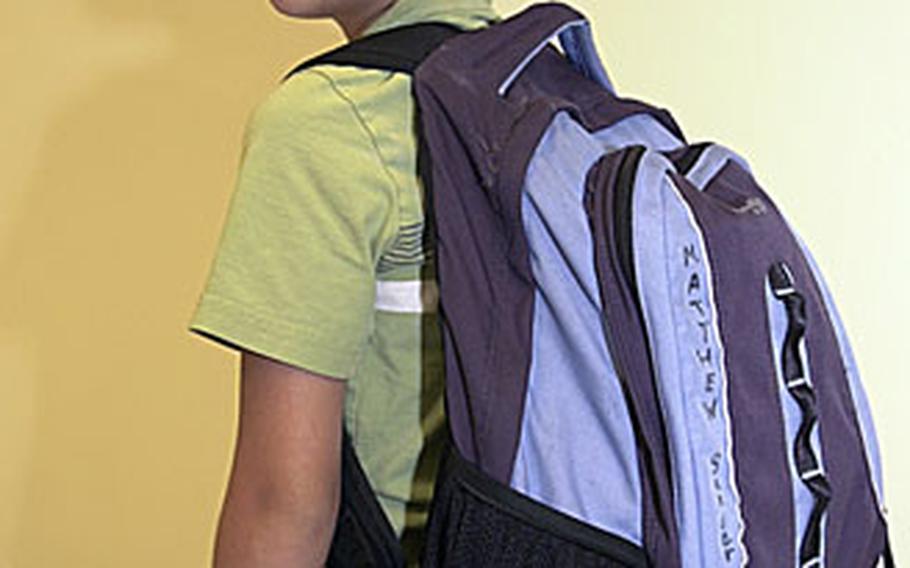 Matthew Sander, 7, demonstrates the correct way to carry a backpack as part of National School Backpack Awareness Day. The pack rests at the curve of Matthew’s back. (Cindy Fisher / S&S)

Matthew Sander, 7, demonstrates the correct way to carry a backpack as part of National School Backpack Awareness Day. The pack rests at the curve of Matthew’s back. (Cindy Fisher / S&S) 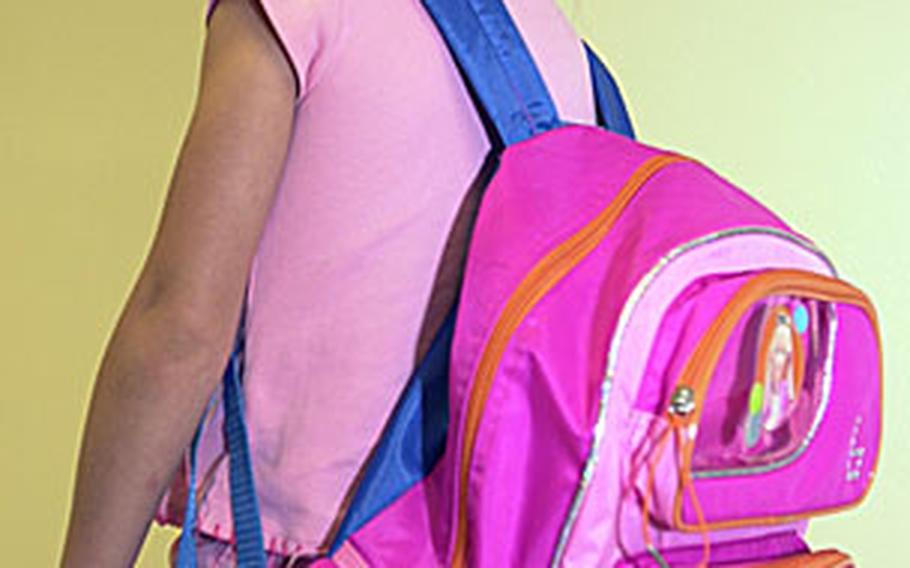 Allison Sander, 6, demonstrates the incorrect way to wear a backpack. Her shoulder straps are not properly adjusted, which allows the pack to hang too low and shift on her back. (Cindy Fisher / S&S)

That&#8217;s the slogan for Wednesday and one that should be heeded every school day, according to Lt. Anthony Papp, an occupational therapist at U.S. Naval Hospital Okinawa.

An estimated 40 million U.S. students carry backpacks to school, Papp said. In 2001, more than 7,000 people visited emergency rooms with backpack-related injuries, and about half suffered by children 5 to 14 years old, according to the association.

Papp said that heavy and improperly worn backpacks can damage still-developing muscles, tendons and ligaments in a child&#8217;s back. Researchers also have found that children burdened with backpacks that are more than 20 percent of their body weight experience a decreased lung capacity, he said.

The association recommends that a loaded backpack weigh no more than 15 percent of the child&#8217;s weight.

Papp, however, recommends even less of a burden &#8212; backpacks no heavier than 10 percent of body weight.

&#8220;Only at 10 percent of their body weight did [wearing the backpack] no longer affect their lung volume or fatigue them,&#8221; he said.

He also recommends parents and teachers work together on the issue, because &#8220;a child should only carry what is essential.&#8221;

Heavy items should be placed in the backpack against a child&#8217;s back to put the weight near the child&#8217;s center of gravity.Children can hand-carry some items if the backpack is getting too heavy.Buy packs with padded shoulder straps, which reduce strain on the neck and shoulder area.Straps should be tightened to place the pack against the body to reduce sideways strain on the back.If there is a waist belt to the pack, use it to help distribute weight evenly.Adjust straps so that the pack rests in the lower curve of the back, typically at the waist of the pants.&#8212; Stars and Stripes