Lifesaver training gets a lift as medic units join forces 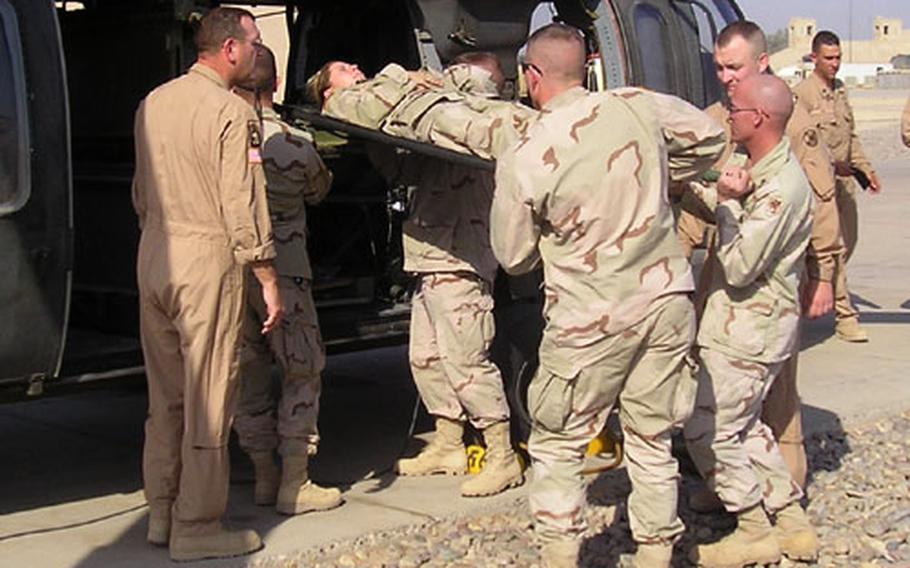 LSA ANACONDA, Iraq &#8212; Soldiers from across the base fulfilled a military medical requirement and learned the most realistic and relevant training possible through a combat lifesaver program launched this month.

Instead of just the basics, such as intravenous injections, splints and bandages, soldiers practiced loading an injured comrade into a Black Hawk and other skills.

When the unit responsible for medical education shifted its mission in August, members from all the medical units remaining &#8212; Army, Air Force, aviation and civilian &#8212; came together to take over, adding their respective expertise to maintain combat lifesaver education at Anaconda.

&#8220;They all have different experience and pitch in different resources,&#8221; said Capt. Troy Sarria, who coordinates the new cooperative medical education group.

The Army requires one in 10 soldiers in every unit to have combat lifesaver certification to treat immediate life-threatening wounds, said Maj. Kristi Hilton, with the 13th Corps Support Command medical logistics section.

It&#8217;s up to units to make sure their soldiers stay up on training. And since units can&#8217;t travel to Kuwait before heading home without combat lifesavers in tow, the need is more urgent as Operation Iraqi Freedom II comes to a close.

Units had &#8220;to make sure all that training has been done prior to them leaving,&#8221; said Maj. Valerie Smith, operations officer for the 118th Area Support Medical Battalion.

About 200 soldiers needed to be recertified and 150 certified in the next few months, Hilton said.

The course includes theater-specific sections not part of a normal combat lifesaver class including field sanitation, combat stress and loading a helicopter for an air evacuation.

When the topic is combat lifesaving and the students are in Iraq, teachers discovered an eager group of pupils.

&#8220;[Instructors] think they definitely paid attention more than they would back in the States,&#8221; Sarria said.

The new group will offer combat lifesaver training and retraining, as well as certification for medics.

Ten groups from the Army, Air Force and the contracting firm KBR are participating, including the 82nd Medical Company (Air Ambulance), the 785th Combat Stress Unit and the 226th Medical Logistics, for supplies, Hilton said.

Many of the units include reservists and National Guardsmen who have medical backgrounds in their civilian lives and add different support, said Lt. Col. Robert Cody, 118th Medical Battalion commander.

While some units have medics who could recertify their own soldiers, the partnership eases the burden on those that don&#8217;t.

The partnership has also brought the medical units together to collaborate on base-wide medical planning, which didn&#8217;t really exist before.