Life’s a bit different for crew of old, new aircraft 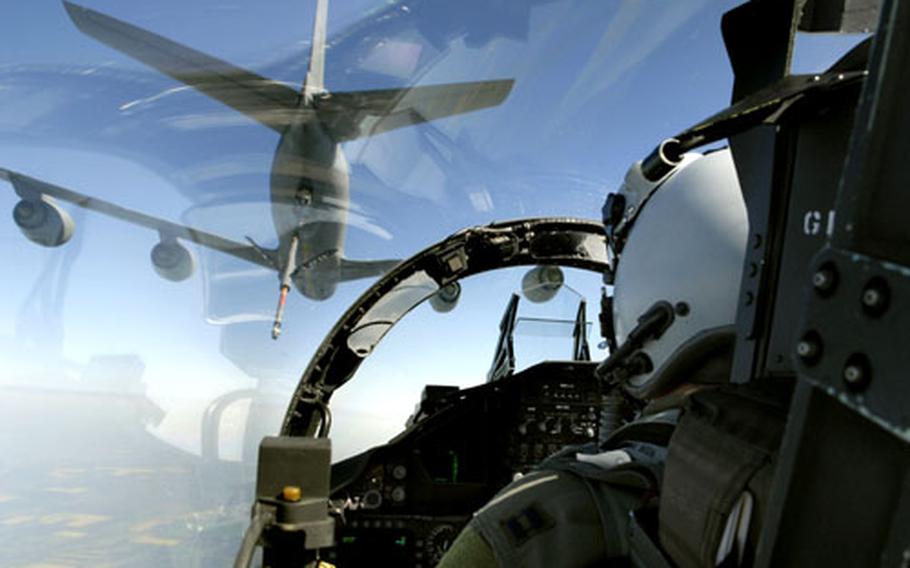 Capt. Brad "Rainman" Hurbinger, an F-15 Eagle pilot assigned to the 493rd Fighter Squadron, moves into position to receive fuel from a KC-135 Stratotanker on duty from RAF Mildenhall’s 351st Air Refueling Squadron during a training mission last year over Eastern Romania. The England-based KC-135s are among the oldest Air Force planes in service in Europe. (Ben Bloker / S&S)

They&#8217;re in the Air Force. They work with or fly military aircraft in which they take great pride. Most missions involve long trips away from base. And they&#8217;re all based in Europe.

But there seemingly aren&#8217;t a lot of other things in common between pilots and crews of the KC-135 and those on the C-40.

The average age of a KC-135 Stratotanker based in Europe is 46, according to figures provided by U.S. Air Forces in Europe. The lone C-40 at Ramstein Air Base in Germany checks in at less than 5.

Tech. Sgt. Steven Browne, one of five flying crew chiefs assigned to the C-40, worked on the KC-135 during his last assignment at Mountain Home Air Force Base in Idaho. He said one of the biggest differences is that he and Staff Sgt. Eric Battley conduct repairs in business suits while they&#8217;re deployed away from the base.

Their C-40&#8217;s mission involves taking USAFE commander Gen. Roger A. Brady or visiting dignitaries to far-flung locations, hence the need for business attire. Their mission is made easier because of the aircraft&#8217;s age. Browne and Battley, who formerly worked on the C-130E &#8212; the other 40-plus warhorse in the USAFE fleet &#8212; said they&#8217;re responsible for repairs when the plane is away from Ramstein. Contractors who work for Boeing are responsible for much of the maintenance when the airplane is in Germany for a handful of days each month.

Master Sgt. Kiwon Kim, a lead production superintendent at the 100th Air Refueling Wing at RAF Mildenhall in England, said some of the KC-135&#8217;s breakdowns require major work to fix.

When there&#8217;s a fuel cell leak that&#8217;s not immediately identifiable, Kim said crews might have to drain out 80,000 pounds of fuel before they can identify it and fix the problem.

Browne and Battley said the C-40 doesn&#8217;t usually have such issues, but when something goes wrong on the C-40, the plane alerts the crew to the problem and pinpoints the location. It&#8217;s also generally much easier to access all the parts on the C-40 to replace them than it is on the KC-135, Browne said.

Those who fly the planes also face a vast difference in technology.

The controls of a KC-135, known as the &#8220;yolk,&#8221; are a bit heavier than in a modern jet, according to Capt. Rob Arnett, who flew the much smaller (and younger) C-21 from Wright-Patterson Air Force Base in Ohio before moving to the refuelers in 2006. He likened it to driving a car without power steering.

The autopilot feature requires more attention than it might in other aircraft as well, he said.

Maj. D.J. Blakemore said flying the C-40 isn&#8217;t exactly like flying on autopilot all the time. But he said there are obvious technological advantages compared to his former aircraft, the C-5 Galaxy.

On a typical mission, Blakemore is one of 10 crewmembers aboard the C-40: three pilots, two communication specialists, two crewmembers and three flight attendants.

On reflection, Browne and Battley said they share two other things in common with their crew chief counterparts with the KC-135.

And they&#8217;ve also got to lug around lots of baggage and equipment. Even in those business suits.