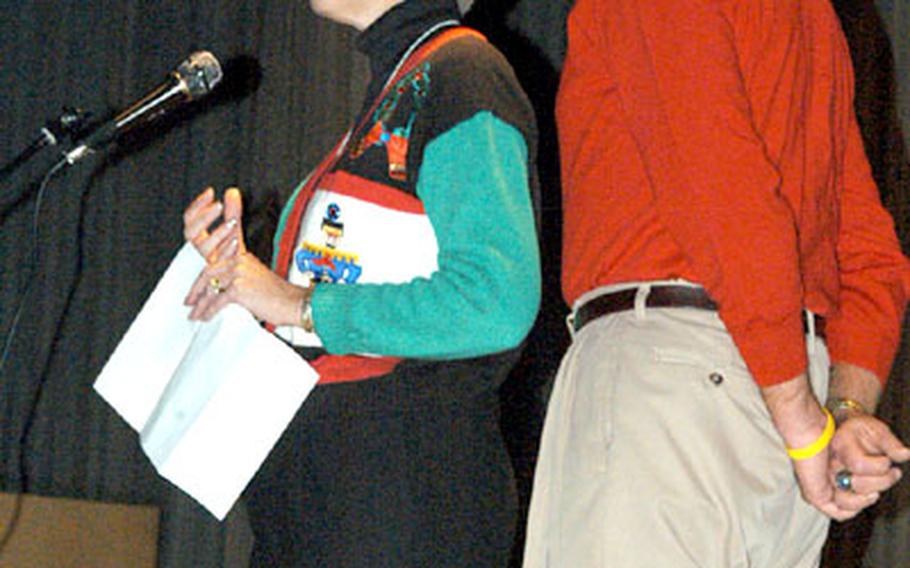 Patricia and Steve Boyd, teachers at Seoul American High School, talk about how they would feel if a drunken driver killed their daughter, Lauren, who is a senior at SAHS. The schoolwide assembly featured "eulogies" from a group of students who imagined they had died in alcohol-related incidences. (Teri Weaver / S&S)

YONGSAN GARRISON &#8212; The Seoul American High School auditorium on Monday afternoon could have been a scene from the cutting-room floor of any teen flick: The students were glad to be out of class yet somewhat restless as they sat through an hourlong assembly while their teachers and friends discussed the perils of alcohol abuse.

So many of them did what teens do. Some giggled at the mention of fake IDs. Others whispered knowingly when the speakers mentioned alcohol brands. A few even shouted out to their friends on stage.

But no one said a word when Patricia Boyd, the school&#8217;s business teacher, started crying. She was pretending to give a eulogy about her daughter, Lauren, a senior at SAHS.

&#8220;Why my baby?&#8221; Boyd asked said between sobs as she shared the feelings she would have if Lauren died. &#8220;Because someone else made a serious, serious mistake, our lives have been changed forever.&#8221;

The scenario, like a movie, was made up. But the feelings the Boyds and others shared were real. They all were part of a program meant to make every student in the school think about alcohol abuse and how they would feel if someone they knew died because of it.

Only five students at the high school knew before Monday morning what would happen at the afternoon assembly, said Michelle Pell, the school&#8217;s English and journalism teacher, who helped put the program together.

During first period, 64 students were taken out of class and put into the library, where they were told to pretend they&#8217;d died from binge drinking, suicide, or an alcohol-related car crash or fight. They all wrote essays, or eulogies, about the scenarios. A dozen volunteered to share their thoughts on stage.

Sheena Davis, a 16-year-old junior, said the exercise made her think about her younger sister. The two girls have a history of not getting along, something Davis wants to mend. That sibling friendship &#8212; along with the fun she has with teachers and friends in high school &#8212; made her realize what she would miss.

8th Army Military Police Command Sgt. Maj. Tommie Hollins is looking for that kind of peer pressure to persuade teens not to drink. It&#8217;s hard for teens to buy alcohol on-base, he said, because only a few places sell spirits and staff there routinely check identification.

In Seoul, however, his military police have little control and little confidence that anyone worries about customers&#8217; ages. &#8220;There&#8217;s really no ID check off-base,&#8221; he said after the assembly.

A few parents also were there Monday to talk about the possibility of losing a child to alcohol.

Lauren Boyd said she learned Monday morning that her parents, Patricia and Steve, who is a social studies teacher, were planning to participate. When her mother began crying on stage, Lauren buried her face in her hands and used her sleeves to wipe her eyes.

She cleared her throat and smiled, and quickly got back to high school life. She hugged her boyfriend, then headed off to cheerleading practice. Her mom, the squad&#8217;s coach, would follow.