Life in Italy back on track as truckers' strike ends 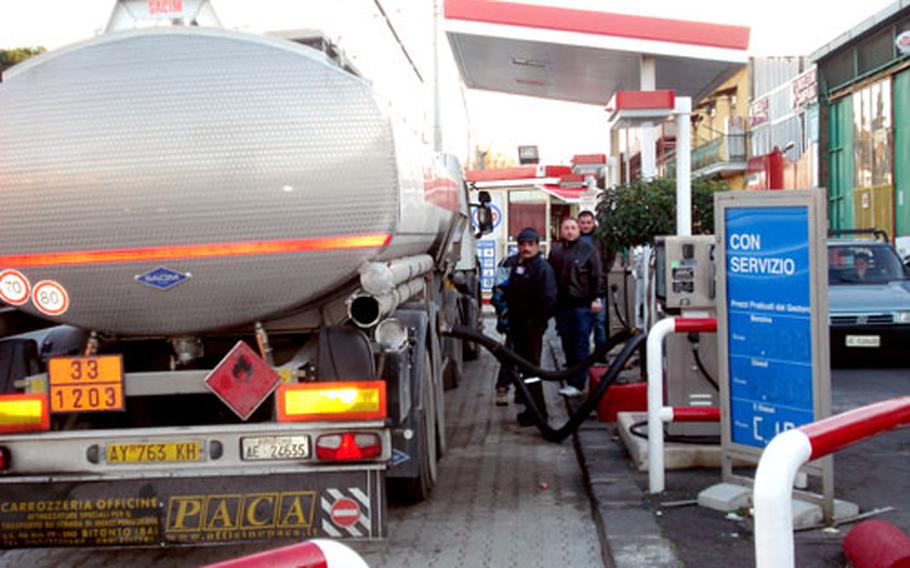 With the end of a truckers&#8217; strike &#8212; and a slow replenishing of fuel stations and services throughout the nation &#8212; officials agreed to reverse their earlier decision to reduce base staff and functions to a minimum, and to close schools Thursday and Friday.

Naval Support Activity Naples sailors, employees and elementary and high school students are to report to work and school as usual Friday morning. They had thought the strike might have led to a four-day weekend.

A base e-mail message alerting employees of the reversal went out at 10:45 a.m. Thursday, and employees who did show up for work began making the rounds of phone calls to advise fellow workers of the change.

&#8220;When we learned of the cessation of the strike late last night, it was too late to change course [for Thursday],&#8221; said Cmdr. Jeff Jackson, NSA Naples executive officer. &#8220;But I think this gives everyone adequate time to find a way to work [Friday], be it carpooling, gassing up cars, whatever.&#8221;

The Italian government and union leaders signed off on an agreement late Wednesday, prompting striking truckers to return to work and ending blockages that slowed the nation.

Union representatives issued a statement saying the government met some of their requests, such as an obligatory written workers&#8217; contract, minimum tariffs and an oversight of costs of fuel, according to news reports.

Due to the strike, gas pumps were idle and dry for two days &#8212; and much of Thursday. Mounting piles of trash went uncollected in Naples and grocery stores reported shortages. Fresh produce rotted in warehouses.

Italian petroleum and governmental officials estimated that by around noon Saturday, all gas stations should be replenished and opened for normal business, according to the ANSA news agency.

Gas stations along highways and major thoroughfares were being replenished first, followed by those in cities and towns next.

Three of the four fuel stations within a mile of the front gates of Aviano Air Base in northern Italy were open for business late Thursday afternoon.

A truck came to refuel Augusto Bortoluzze&#8217;s Esso station at 4 p.m., and the manager was hoping to be selling gasoline again by 4:30 p.m. He had run out of gas late Tuesday and didn&#8217;t open at all on Wednesday.

Giancarlo Dallacqua&#8217;s Agip station a few blocks away got its first fuel in more than five days Thursday morning. He said his tanks still weren&#8217;t full and he was hoping for more deliveries Friday and Saturday.

One difficulty Navy officials faced during the strike was countering rumors to keep people from going into a panic, Jackson said.

An erroneous rumor circulated Wednesday that the commissary in Naples was closing its doors early, and not reopening until the strike ended.

By 3 p.m. Wednesday, customers made a mad dash to the commissary, and excruciatingly long checkout lines ran the length of the store until it closed at 7 p.m., he said.

Because of the strike, the store&#8217;s shelves might not be fully stocked for this weekend &#8212; payday weekend &#8212; when people do much of their shopping, he said.