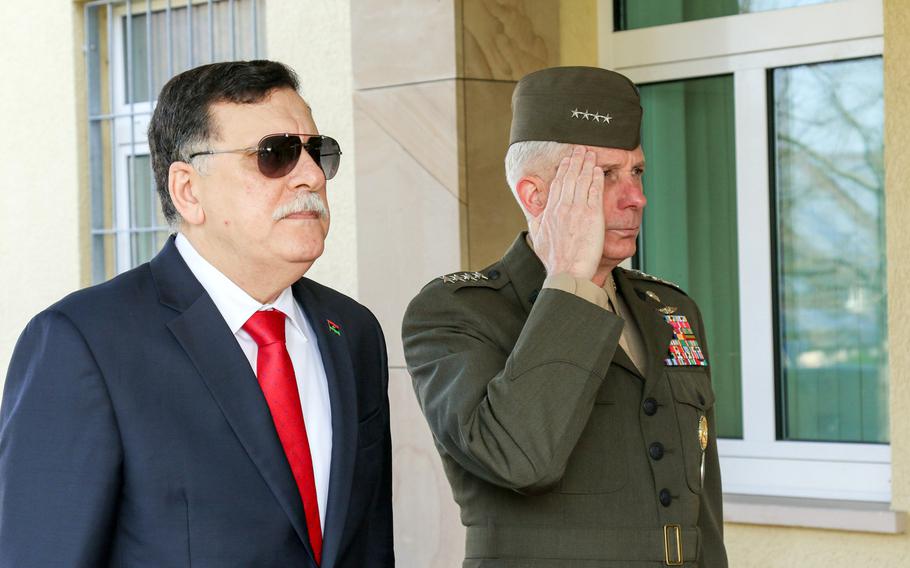 Libyan strongman Kalifa Haftar is meeting with Russian leaders in Moscow in a sign of growing ties with a militiaman whose forces now control a growing swath of territory in the oil-rich north African country.

Haftar, who leads a high-powered militia known as the Libyan National Army, is a key political and military rival to the country’s fragile, Western-backed central government in Tripoli.

Ironically, Haftar was once seen as a creation of the U.S. The Americans negotiated his release from Moammar Gadhafi’s prison in 1990 and brought him to the U.S., where he settled in Langley, Va., close to CIA headquarters. He returned to Libya in 2011 and joined the uprising against Gadhafi — widely seen as America’s man in the opposition.

Six years later, Haftar’s relations with Moscow have been a concern for the United States, including leaders at U.S. Africa Command who have cast a wary eye on the linkages.

Haftar said on Monday in Moscow that his troops had seized control of Benghazi, the country’s second-largest city and a former stronghold of extremist groups. Benghazi lies near a number of key oil fields and is a hub for vital oil infrastructure.

“We expect to continue this struggle until the Libyan National Army takes control of Libya’s entire territory in order to ensure stability and security,” Haftar said after meetings with Russian Foreign Minister Sergey Lavrov and Defense Minister Sergei Shoigu.

Russia, along with Egypt, has looked to Haftar as a possible ally and potential stabilizing force in Libya, which has turned into a hotbed for scores of militias and religious extremists, including the Islamic State group.

Haftar, a former Libyan army general, broke with Gadhafi in the late 1980s and spent much of the following decade plotting to oust the strongman. At the time, Haftar — who lived in exile for nearly 20 years in Langley, Va., close to CIA headquarters — was accused by Gadhafi’s regime of being an agency asset. He later mended ties with Gadhafi, but did not return to Libya until 2011 when he led rebel forces fighting the dictatorship.

For its part, Washington has been aligned with the internationally recognized Government of National Accord and has backed up its forces in battles against ISIS elements. These were the targets of an AFRICOM aerial campaign that helped local fighters last year seize control of the coastal city of Sirte.

The turmoil unleashed in Libya after the 2011 NATO bombing campaign, which helped topple dictator Moammar Gadhafi, has fueled a migrant crisis in Europe.

Since then, and particularly after the assassination by an Islamist militia of U.S. Ambassador Christopher Stevens in Benghazi in 2012, Western governments have shied away from deploying military forces to help stabilize the nation.

Some security analysts have said Moscow’s growing ties with Haftar could signal interest in establishing a larger regional foothold. During the past two years, Russia has developed a larger, steadier naval presence in the Mediterranean Sea, a move that coincides with its operations in Syria. Earlier this year, Haftar was hosted aboard the Russian aircraft carrier Admiral Kuznetsov as it steamed through the Mediterranean Sea.

If Russia had a stronger position in Libya, it could exert more control over routes used by migrants leaving northern Africa for Italy. NATO’s southern European states such as Italy consider stemming the flow of migrants from Libya a top security priority.