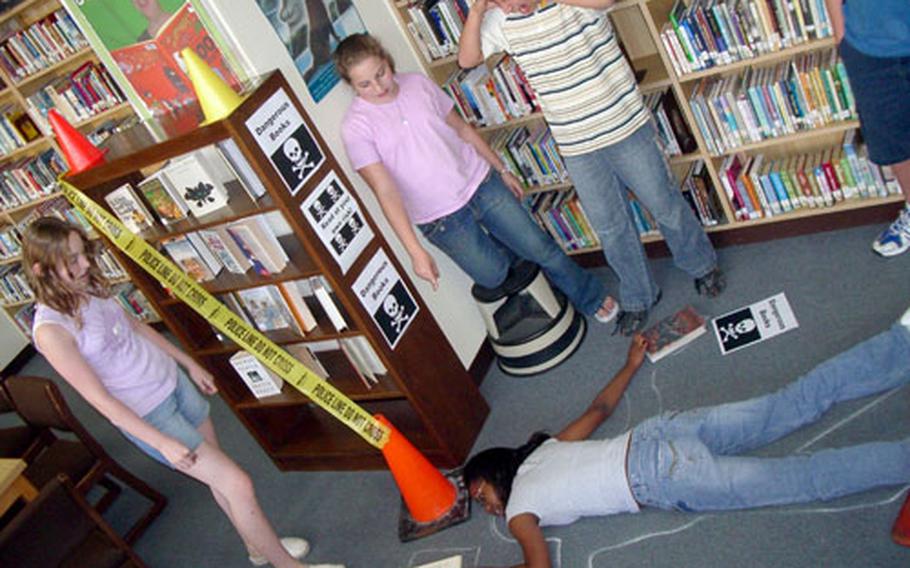 Students from 7th and 8th grade at the consolidated schools at Marine Corps Air Station Iwakuni "react" to a student floored by the "Thought Police" for reading a challenged book as part of the weeklong banned-book week. (Courtesy of Diane Dill)

To illustrate the senselessness and prevalence of censorship of creative works, Marine Corps Air Station Iwakuni schools recently celebrated Banned Books Week, a chance to encourage reading and to highlight the history and danger of censorship.

About 100 books, including popular classics and recent favorites, have at one time been banned from public and school libraries.

The week is a chance &#8220;to look at books that have been challenged by someone, somewhere who said they shouldn&#8217;t be on a library shelf,&#8221; said Jake Keup, information specialist for MC Perry High School&#8217;s library.

To bring the point home, the school library set up a banned book area, cordoned off by police tape, marked with danger warnings and the murder-scene chalk outlines of bodies reading books.

The once-banned books enjoyed a surge in circulation as a result, he said.

Around the school, Keup and elementary library information specialist Diane Dill placed posters depicting the covers of once-banned books along with the arguments presented for why they should be banned.

The idea that they weren&#8217;t allowed to read something evidently didn&#8217;t sit well with a few students &#8212; some of the posters disappeared off the walls, Keup said.

The librarians also visited classrooms during the event to debate censorship.

The high school students had interesting arguments, Keup said, coming from a military environment where censorship sometimes can save lives.

The librarians emphasized that children and their parents should decide which books are and are not appropriate.

This was Iwakuni&#8217;s first Banned Books Week, an event created 25 years ago by the American Library Association.

&#8220;Throughout history, there always have been a few people who don&#8217;t want information to be freely available. And this is still true,&#8221; ALA President Leslie Burger said in a statement. &#8220;The reason more books aren&#8217;t banned is because community residents &#8212; with librarians, teachers and journalists &#8212; stand up and speak out for their freedom to read. Banned Books Week reminds us that we must remain vigilant.&#8221;