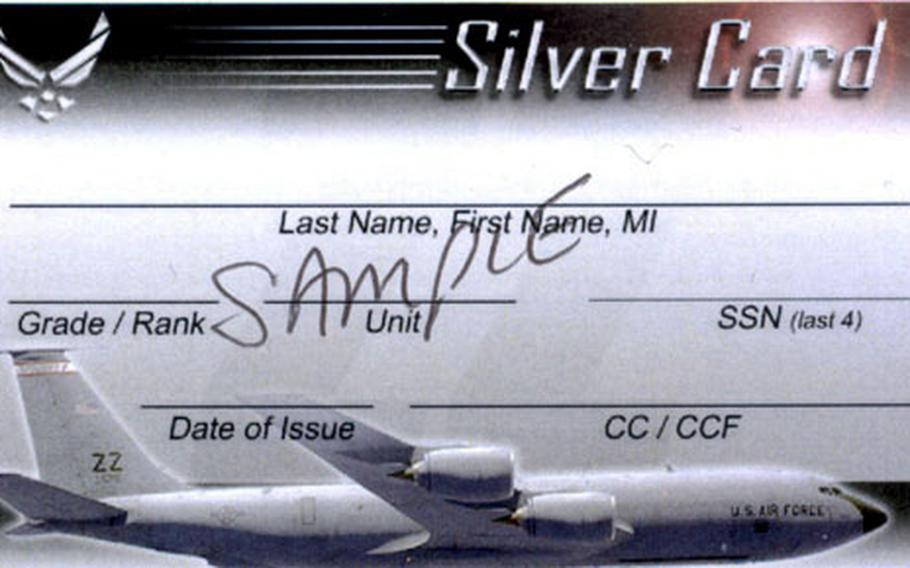 A silver card signed by an airman’s company commander entitles the airman to unrestricted activity as part of Kadena Air Base’s liberty card program, which began in July. (Courtesy of U.S. Air Force)

KADENA AIR BASE, Okinawa &#8212; By most measurable standards in the Air Force, Senior Airman Andrew Jones is an exceptional servicemember.

Jones, of the 18th Communications Squadron, has been an airman of the quarter. He received a below-the-zone promotion in November, meaning he was bumped up ahead of schedule.

Despite his performance, Jones must be back on base by midnight on weekdays and 1 a.m. on weekends, like most junior airmen ranking E-4 and below in his squadron.

Meanwhile, some lower-ranking airmen in other squadrons have full liberty privileges without curfew.

Commanders say they&#8217;re still figuring out what works best for their squadrons. But that doesn&#8217;t make it any easier for Jones to explain why he can&#8217;t stay overnight with his fianc&#233;e, an Okinawan native living in Naha.

Jones asked his supervisor for unrestricted liberty &#8220;silver card&#8221; consideration shortly after getting promoted in November, and he still hopes that his request will be granted soon.

Even in squadrons where silver cards are granted readily, some airmen say they don&#8217;t get much chance to use them because their friends are still under restrictions.

The liberty program shouldn&#8217;t discriminate based on rank, many airmen say.

Instead, airmen of all ranks should be granted silver cards unless they get in trouble, said Airman 1st Class Ashley Swink, of the 18th Medical Group.

Officials point to statistics collected by Kadena&#8217;s Alcohol Task Force that list the largest group of alcohol-related offenders at 20-25 years old as their reasoning behind restricting junior airmen.

However, junior airmen say that&#8217;s because there are more of them than noncommissioned officers.

Squadron commanders say that they are aware of that, and that they also keep a close eye on their sergeants.

&#8220;We pulled a silver card from a staff sergeant who demonstrated that he wasn&#8217;t ready for it,&#8221; said Lt. Col. William Gerhard, 18th Communications Squadron commander.

However, Marks has been more willing to grant silver cards to senior airmen and even airmen first class, such as Swink, than some commanders.

Marks also gives his airmen business cards with his cell phone number on it, along with his top enlisted airmen&#8217;s numbers and a blank where supervisors can write their phone numbers.

While he would rather airmen be in before curfew, Marks says that airmen are encouraged to call should they ever need help after hours.

Marks and Gerhard both said they grant exceptions should airmen have a legitimate reason for missing curfew, including delayed flights, base-affiliated tours or physical training.

Gerhard hasn&#8217;t been issuing silver cards to airmen first class; however, he said that senior airmen who demonstrate responsibility are beginning to earn silver cards.

Along with staying out of trouble, putting in a full day&#8217;s work and progressing along a career development course are keys to earning a silver card, Gerhard said.

Driving under the influence and alcohol-related incidents

The following figures on driving under the influence and alcohol-related incidents were provided by Kadena Air Base&#8217;s Alcohol Task Force:

In 2005, Kadena Air Base had 95 driving under the influence incidents, up from 92 in 2004. The 2005 figure is 18.8 percent higher than the five-year average of 80 DUIs.Kadena&#8217;s DUI rate has slowed since July, when its 63 DUIs were 28 percent higher than in July 2004.As of Dec. 12, 52 of Kadena&#8217;s 89 DUIs in 2005 were committed by civilians, other military branch members or 18th Wing associate units.As of Dec. 12, Kadena Air Base had 194 alcohol-related incidents. Forty-one of those were physical assaults, while the rest were DUIs and miscellaneous incidents where base police were called to the scene.As of Monday, Kadena&#8217;s 18th Wing had not had a drunken driving arrest for 28 days. At 60 days, servicemembers would receive a one-day stand-down.In 2004, Kadena Air Base averaged about 12 alcohol-related crimes and incidents per 1,000 people. That figure ranked ahead of Yokota, Hickam and Elmendorf Air Force bases, but was about half of South Korea&#8217;s Kunsan Air Base. Figures for 2005 were not available at press time.&#8212; Erik Slavin