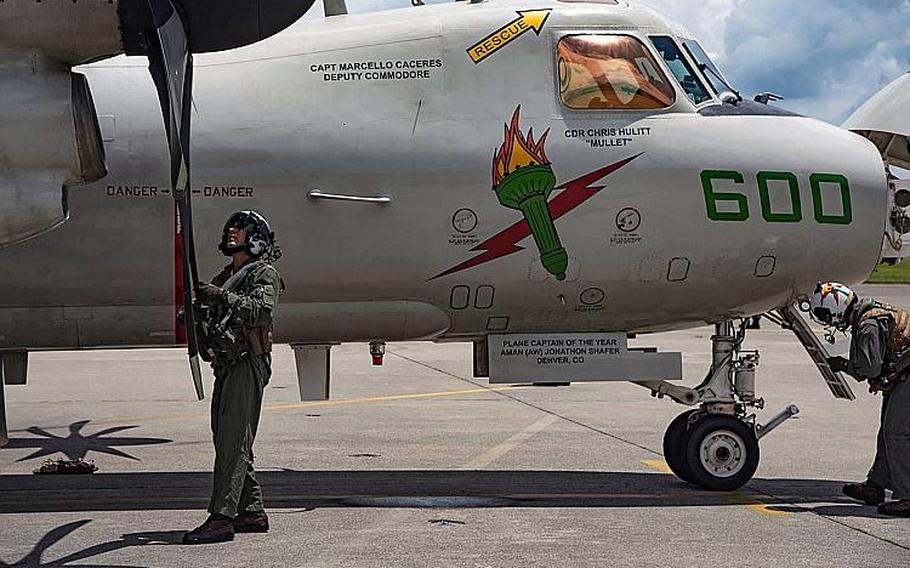 VAW-115’s tenure made it one of the Navy’s longest serving forward-deployed air squadrons, according to a service statement.

The outgoing squadron of E-2C Hawkeyes has been relieved by Carrier Airborne Early Warning Squadron 125, which arrived at Marine Corps Air Station Iwakuni last February and flies the new E-2D Advanced Hawkeye early warning and control aircraft — the latest variant of the series.

The E-2D “employs long-range radar and electronic communications capabilities to oversee the battle space and detect threats beyond the sensor range of other friendly units,” according to a Navy statement.

Thursday’s departure of VAW-115 is the latest step in the Navy’s relocation of the bulk of Carrier Air Wing 5’s nine air squadrons from Atsugi to Iwakuni.

All fixed-wing aircraft squadrons are scheduled to relocate to Iwakuni, with two helicopter squadrons and a logistics squadron remaining at Atsugi.

The move, directed in May 2006 as part of the U.S.-Japan realignment agreement, was originally to be completed in 2014. The phased relocation is now scheduled to begin in the second half of this year, Navy officials said.

The move will double MCAS Iwakuni’s population to approximately 10,000.

VAW-115 is relocating to Naval Base Ventura County in California, where it will continue to support carrier strike groups, according to the Navy.

VAW-115’s executive officer, Cmdr. Christopher Hulitt, thanked the Japanese for their hospitality and said the unit built good relationships with the Self-Defense Force.

“VAW-115’s sailors, aircrew, and our families are all extremely grateful for the hospitality that we received from the people of Japan during our time at Atsugi, and for our outstanding partnership with the Japanese Maritime Self Defense Force,” he was quoted as saying. “It is tough to say ‘Sayonara.’”