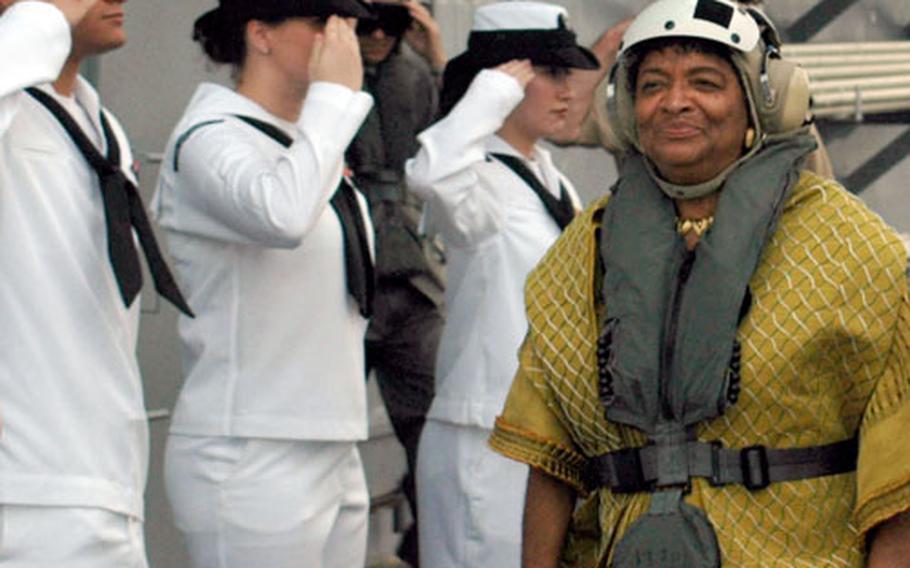 Ellen Johnson Sirleaf, the newly elected president of Liberia, visits USS Mount Whitney Tuesday to thank the ships for making the journey to the African nation in support of the inaugural ceremonies. (Kurt Riggs / U.S. Navy)

Ellen Johnson Sirleaf, the newly elected president of Liberia, visits USS Mount Whitney Tuesday to thank the ships for making the journey to the African nation in support of the inaugural ceremonies. (Kurt Riggs / U.S. Navy) 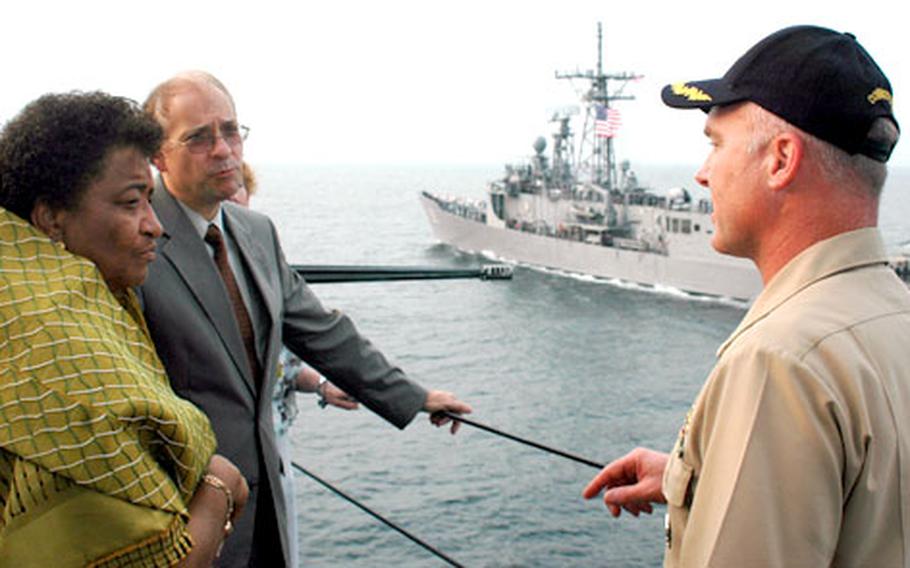 In the world of sideboys, Petty Officer 1st Class William Dowe couldn&#8217;t have asked for a better day than Tuesday.

He and the other sailors who perform the ceremonial arrivals and departures from U.S. Navy ships were sharp and right on target, he said.

&#8220;We hit every mark,&#8221; said the 28-year-old sailor, one of the first to greet the newly elected president of Liberia when she boarded the USS Mount Whitney on Tuesday, and one of the last to see her off.

The historical significance of Ellen Johnson Sirleaf&#8217;s visit was not lost on the crew, said four members interviewed Wednesday during a video-teleconference from the Mount Whitney.

About 500 sailors and civilian mariners from the Gaeta, Italy-based Mount Whitney, the flagship for the Navy&#8217;s 6th Fleet, and the Norfolk-Va.-based frigate USS Carr, were on hand for Monday&#8217;s inauguration of Liberia&#8217;s first democratically elected female president.

On Tuesday, Sirleaf briefly boarded the Mount Whitney as it drifted off the coast of Liberia&#8217;s capital, Monrovia, and told the sailors she appreciated the United States&#8217; support for her country, said those who either spoke with Sirleaf or listened to her speech.

&#8220;Thank you so much for all your help. Your presence here is a reminder to the people of Liberia that we can count on the United States for anything,&#8221; Sirleaf said, according to a Navy press release. &#8220;We have much work to do in our country, but we know that you and your country will be there to stand by us no matter what.&#8221;

Sirleaf is not just Liberia&#8217;s first democratically elected female president &#8212; she has blazed a trail into the history books by being the first for the African continent.

With its impromptu mission now complete, the Mount Whitney will return to its home port in Gaeta, 6th Fleet spokesman Lt. Chris Servello said. The Carr is deployed to the region in support of the war on terror.