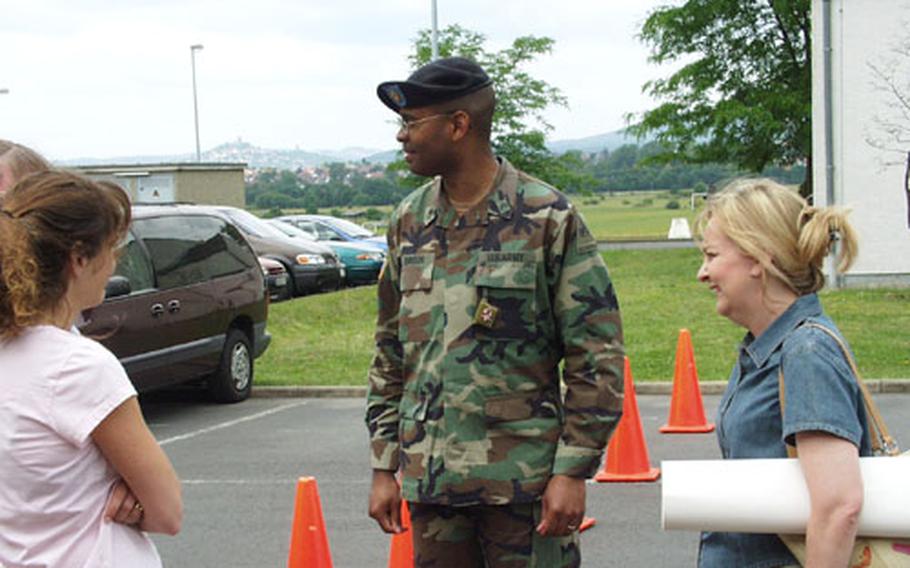 Spouses in Giessen view Staff Sgt. Anthony Johnson as an indispensable bridge between families and the military. Johnson, a howitzer section chief, is currently the family readiness liaison for the 2nd Battalion, 3rd Field Artillery Regiment, a position he assumed last year while recuperating from a gunshot wound suffered in a Baghdad raid. Pictured with Johnson (center) are Gina Anderson, left, a family readiness group leader, and Tina Rabena, the FRG leader for the battalion. (Kevin Dougherty / S&S)

GIESSEN, Germany &#8212; It was a hot August night when some rooftop snipers took aim at a platoon of U.S. soldiers conducting a raid in central Baghdad.

As Staff Sgt. Anthony Johnson recounted the shootout from his office in Giessen, a nearby fan hummed and vibrated, an unintended sound effect that enhanced the year-old war story.

In the coming weeks, as members of the 1st Armored Division return to their home bases after more than a year in Iraq, many more stories will no doubt be told. Some will make people laugh. Some will moisten eyes.

Johnson isn&#8217;t sure what the future holds for him, but there&#8217;s a good chance he&#8217;ll move on to a new job once the 2nd Battalion, 3rd Field Artillery Regiment settles back into its rightful place.

To set this story straight, Johnson is not the battalion storyteller, though he certainly could spin a yarn or two. He&#8217;s the family readiness liaison representative &#8212; a walking, talking bridge between families and the fighting force.

Before the war, a liaison like Johnson may have devoted a fraction of his duty day to family issues, said Capt. Edmund Doody, the battalion rear detachment commander in Giessen. That isn&#8217;t the case any more.

The theory goes that spouses with pressing issues on the home front will at some point vent their frustrations to their partners in fatigues, especially if there are major snafus. The soldier&#8217;s focus could become split between here and there. And in a place like Iraq, keeping one&#8217;s head in the game is half the battle.

&#8220;It&#8217;s very stressful when your husband is gone,&#8221; said Gina Anderson, a family readiness group leader in Giessen. And sometimes the wives end up frustrated and angry.

Whether people refer to them as troubleshooters, facilitators or comforters, many Army units in Europe now have a soldier or two in the rear dedicated to family issues. The significance of that role grows exponentially when a unit deploys for an extended period.

The liaison becomes an advocate for families, Johnson said.

But with Johnson, it&#8217;s more than that, said Anderson and Tina Rabena, the battalion FRG leader. He&#8217;s married. He has kids. And he&#8217;s been to Iraq. The guy is also incredibly patient and about as calm as they come.

In short, Anderson and Rabena said, Johnson understands both sides of the coin. He also seems to relish the many challenges that come his way every day, though Johnson admits he misses being a howitzer section chief.

Since the battalion deployed 14 months ago, four of its soldiers have been killed in action, said 1st Lt. Tom Breslin, who works in the same headquarters office Johnson does. An additional 27 have landed on the casualty list, including Johnson, who was wounded when one of those aforementioned snipers shot clear through his lower right forearm.

Johnson said he recalls ushering an Army medic into a field ambulance before taking cover amid a buzz of bullets. His right arm then began to ache and his sleeve became soaked in blood.

After he was evacuated to Germany, Johnson wanted to rejoin his unit in Iraq, but was told he couldn&#8217;t because his arm needed time to heal. Besides, he was told, the battalion had the perfect desk job waiting for him.

That didn&#8217;t last long after the 250 spouses in the battalion got to know him. Since January, Johnson and two assistants have handled scores of problems. They also have organized several special events, from Easter parties to Hawaiian luaus to barbecues.

Johnson also gives the spouses a clearer sense of life in Iraq is like. The loss of life and the way the Iraqis live day to day, he said, &#8220;make you appreciate life much more.&#8221;