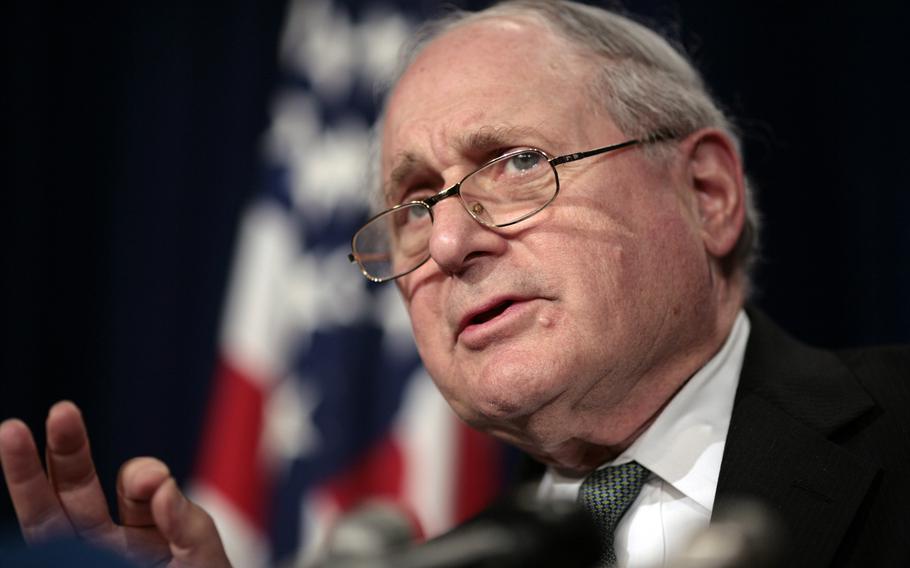 SAN DIEGO — A proposal to strip commanders of their ability to prosecute serious crimes would take away the best tool that commanders have to stop the crimes, the chairman of the Senate Armed Services Committee said Wednesday.

“The power to initiate a court-martial is perhaps the strongest weapon that commanders have to back up efforts to change the climate in their units,” Sen. Carl Levin told reporters during a teleconference.

Levin, a Michigan Democrat, was responding to a proposed bill by Sen. Kirsten Gillibrand, D-N.Y., that would take from commanders the authority to determine whether to move forward with a court-martial in many cases involving a servicemember under his or her command. Instead, a trained military prosecutor not in the chain of command of the victim or the accused would work with investigators to make the decision when the offense could result in more than a year of jail time.

Earlier this year, Levin sponsored an amendment that keeps prosecution authority in the chain of command but provides for an automatic review of any sexual assault report that commanders decide not to prosecute, makes retaliation against servicemembers who report a sexual assault a crime and provides trained military attorneys to victims.

More than 40 senators from both sides of the aisle have pledged their support to the Gillibrand bill, which was designed to address the problem of sexual assault in the military but also would impact how some other crimes are prosecuted. Military-specific crimes like fraudulent enlistment and unauthorized absence would still be prosecuted within the chain of command.

Victims of military sexual assault have supported the Gillibrand measure, saying that many victims are afraid to report crimes under the current system.

Levin said that one of the points made by supporters of the Gillibrand plan is that allies like Canada, Australia, the Netherlands, Germany, New Zealand and the United Kingdom have removed prosecution authority from the chain of command. However, he said, none of those countries changed its system in an effort to protect victims. Instead, many of the countries were forced to make the changes to better protect the rights of accused, he said, citing a letter to his office from Brig. Gen. Richard Gross, legal counsel to the chairman of the Joint Chiefs of Staff.

“The goal here I think on the part of everybody is to put in place the strongest, most effective protections for our men and women in uniform,” Levin said. Removing the authority to prosecute from the chain of command “is contrary to that goal.”

A spokesman for Gillibrand said military leaders are “shifting the goalposts and “fighting hard to protect the status quo.”

“To suggest that commanders do not have a role under the Gillibrand proposal is wholly inaccurate,” Glen Caplin said. “The military has failed to note any statistical or anecdotal evidence that good order and discipline has eroded due to our allies’ independent military justice systems, which is the stated opposition to our proposal. They can slice the data any way they choose, but the fact is this: 50 percent of female victims have told the Defense Department they did not report because they thought nothing would come of it, and victim after victim has spoken out about the bias and conflict of interest in the current broken chain of command system that has re-victimized them when they do come forward.”