Letters being moved to front, unlike first war in Gulf 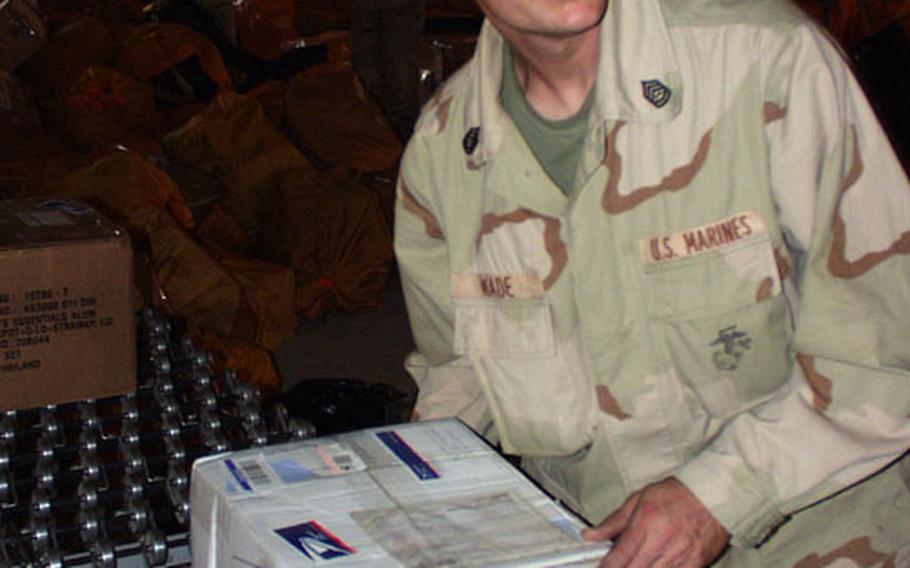 Army Brig. Gen. Sean Byrne, who is in command of — among other operations — mail delivery to U.S. troops in Kuwait and Iraq, on Saturday explains operations. Behind him is Army Maj. Darrell McKown, officer in charge of the Joint Mail Terminal. (David Josar / S&S)

KUWAIT CITY, Kuwait &#8212; The U.S. general who oversees mail delivery said he has taken steps to ensure that letters and parcels continue getting to troops even as the amount of mail grows.

Army Brig. Gen. Sean Byrne said more planes, better sorting facilities and a strategy to get letters to forward-deployed combat locations should eliminate glitches that angered troops and their families during the last Gulf War.

Mail, Byrne noted, may be the second-most important moment of a soldier&#8217;s day. The first is chow. And letters can be nearly as important to troops as their weapon and ammunition when they go into combat.

Mail delivery was a sticking point for troops during Operations Desert Storm and Desert Shield when flights that ferried the mail to the Gulf were canceled, and the parcels and notes stacked up in the United States.

&#8220;Everything is coming though,&#8221; Byrne said Saturday during a tour of the Joint Mail Terminal, a compound of warehouses that the Kuwaiti military had used to store vehicles but now is the temporary home to mountains of parcels.

On Saturday, containers of parcels and letters were unloaded from trucks and rolled down a wheeled ramp, where soldiers and Marines sorted them into piles for individual units. Mail for units that have entered combat are being put into storage containers and will be delivered as soon as the units are in a semi-permanent location.

If those troops move again shortly, Byrne said, only the letters will be moved forward. The packages will arrive once a unit is stable, he said.

Most of the mail will be moved using trucks, although airlift is another possibility, Byrne said.

The packages can be quite unusual.

Most of the parcels, however, contain more ordinary items. A survey of customs declaration forms indicated most boxes contained snacks, canned tuna, magazines, books, toilet paper and other staples of routine military life while deployed in the desert. Someone was getting a pair of prescription glasses, while another person was receiving a Bible from a Baptist church.

For any troops who die in combat, said Byrne, their letters and parcels will be forwarded to their families after their next of kin has been notified.

Mail from Germany and Europe, McKown said, should arrive in three to five days to Kuwait, and letters and packages from the United States should arrive in 12 to 13 days. Roughly 70 soldiers, 45 Marines and 30 civilian contractors staff the Joint Mail Terminal.

Watching over the Marines in the mail facility is Marine Chief Warrant Officer 3 Richard Margino, who has a half-smoked cigar in his right hand and a gold ring with the Marine insignia of an eagle and a globe on his left.

Staff at the Joint Mail Terminal offers these tips for shipping packages and letters to military personnel deployed in the Persian Gulf:

Use a return address.