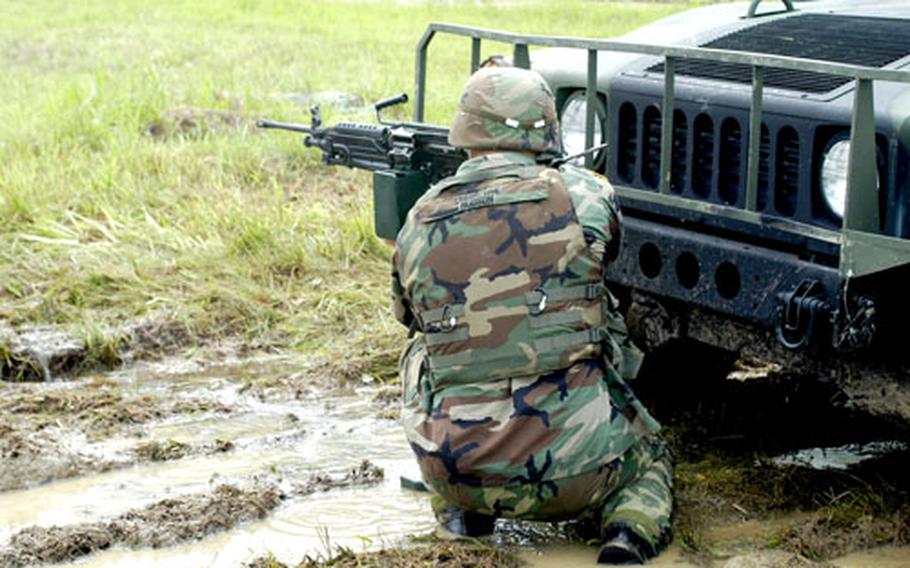 A 728th Military Police Battalion soldier fires an M249 squad automatic weapon while using the front of a Humvee for partial cover and concealment last week at live-fire combat training at a range in South Korea. (U.S. Army photo)

About 100 soldiers of the 728th Military Police Battalion underwent the training along with South Korean army MPs and infantrymen at Bojeol training range southwest of Taegu.

It covered a broad range of skills the MPs would need to do their jobs in wartime &#8212; which firing positions work best in which situations, how to hold their automatic weapons so that their fire will be most likely to hit the target, how to use their MP vehicles in ways that afford cover and concealment, among other skills. And squad leaders got training in keeping proper control of their soldiers during the chaos of combat.

&#8220;I think it was extremely effective,&#8221; said Adams. &#8220;Because the battalion commander was able to link the importance of what we were doing with our operating environment here on the peninsula &#8230; with the larger contemporary operating environment that the Army is in.&#8221;

Lt. Col. Douglas L. Ingros commands the battalion, which is headquartered at Camp Henry in Taegu and nicknamed the &#8220;Warfighters.&#8221; Ingros served in Iraq with the 4th Infantry Division from March 2003 to March 2004.

Part of the week&#8217;s training went to techniques of firing the M249 squad automatic weapon, or SAW.

Training also drilled soldiers in knowing and sticking to vehicle load plans &#8220;so that every soldier in that team or that squad knows where every piece of equipment is,&#8221; he said.

Sgt. Ahn Ji-hwan of the battalion&#8217;s 188th Military Police Company learned that in the din of actual combat he&#8217;ll have to keep a special focus on seeing and hearing his team or squad leader&#8217;s directions. Ahn is a KATUSA, or Korean Augmentee to the U.S. Army.