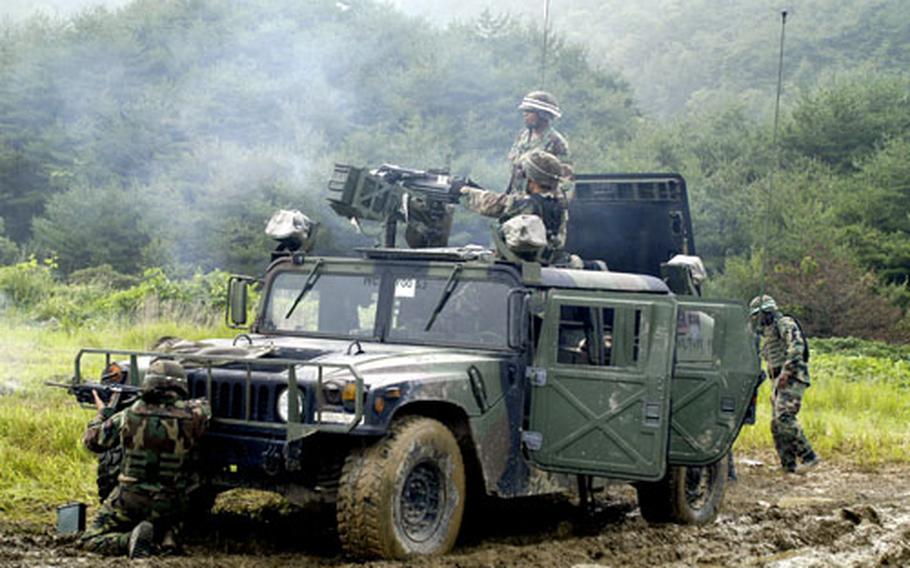 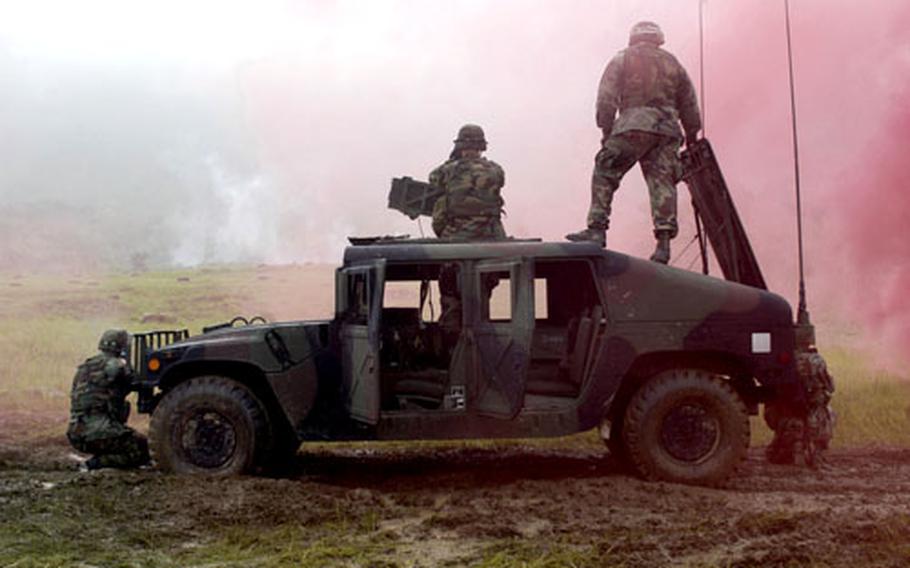 The troops fron the 728th MPs were told by leaders recently returned from Iraq to deviate from traditional Army practices by returning fire in or near their vehicles if attacked on convoy duty. (Jung Woo / U.S. Army) 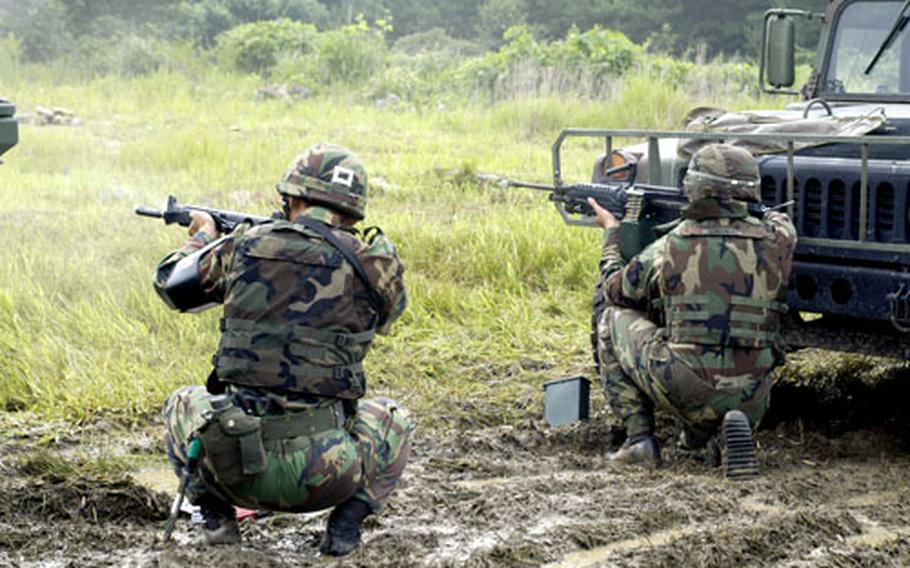 Soldiers were told to modify the prone firing position if firing from that position could clog their weapons. (Jung Woo / U.S. Army) 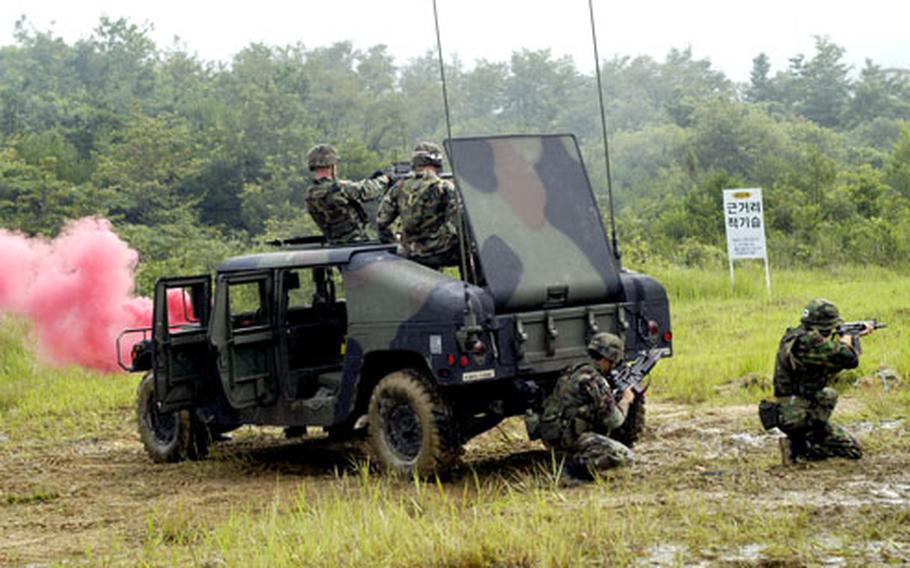 Above, troops were told to use their Humvees’ bodies, including tires and undersides, to shelter them when returning fire. (Jung Woo / U.S. Army)

TAEGU, South Korea &#8212; When the roadside bomb went off, Pfc. Margarita Gutierrez stopped her Humvee, dashed to the rear of the vehicle, got in the prone position and started firing on the enemy to the right.

Other military police officers in her unit were doing the same, just as they&#8217;d been trained to do if ambushed while escorting a convoy.

The action in this case was not in Iraq but at the Bojeol training range in South Korea, about three hours southwest of Taegu, earlier this week.

Gutierrez and about 100 other soldiers of the 728th Military Police Battalion were drilling in one of the unit&#8217;s basic wartime missions: escorting a supply convoy along a main supply route. The training, which began Monday and ended Friday, also involved MPs and infantrymen from the South Korean army.

But the week&#8217;s training was markedly different from the usual live-fire reaction to ambush drills the MPs have conducted in the past.

This time, it drew on the firsthand experiences some of the unit&#8217;s leaders have had in Iraq, said Lt. Col. Douglas L. Ingros, who served there with the 4th Infantry Division from March 2003 to March 2004. Two of the battalion&#8217;s sergeants major also have served in Iraq.

&#8220;We modified the training a little bit as to convoy operations,&#8221; said Ingros, who assumed command of the unit about a month ago. The battalion, nicknamed the &#8220;War- fighters,&#8221; is headquartered at Camp Henry in Taegu.

In past live-fire convoy ambush drills, the battalion&#8217;s MPs were trained to quickly return enemy fire, bolt from their vehicles, form up to assault the enemy&#8217;s positions and then attack by &#8220;fire and maneuver,&#8221; with one group alternating with the one beside it in laying down covering fire while the other moves forward.

In that and other pre-Iraq training methods the battalion will continue to train, said Ingros, but they&#8217;ll put big emphasis on applying lessons learned in Iraq.

Instead of in every case leaving the convoy to chase down the enemy, Ingros said, he&#8217;ll train the MPs to fire at the enemy from their vehicles, keeping close to their convoy and the mission of protecting it. Troops will still assault the enemy&#8217;s positions, but that job would be left to the South Korean infantry.

Humvee gunners were trained to rely on their own split-second judgments as to what targets to fire at from their turrets, something they&#8217;d previously left up to their team leaders.

And Ingros wants gunners to reload their own MK-19 machine guns instead of having the ammunition passed to them, a luxury they may not have in actual combat, he said.

And they&#8217;re being taught the importance of using the Humvee&#8217;s body, including its tires and underside, for cover and concealment during combat.

In addition, he said, the battalion&#8217;s MPs are being weaned from the traditional reliance on the prone firing position. Instead, they&#8217;re being encouraged to use whatever firing positions make the most sense in the immediate circumstances.

Gutierrez got that lesson this week as she lay in the mud firing her squad automatic weapon.

&#8220;I thought that was where I had to stay, but with the mud I was making my weapon jam,&#8221; she said. One of the battalion&#8217;s officers told her she should find a position that would keep the weapon clear of mud.

Also training with the battalion this week was Cadet James Blackburn, who soon will begin his final year at the U.S. Military Academy at West Point.

The training gave him many insights, he said, including that team leaders need to resist the urge to join in firing on the enemy and instead stay focused on directing the firing and other actions of their soldiers.