‘Lemon’ Mustangs leaving a sour taste for buyers in Germany 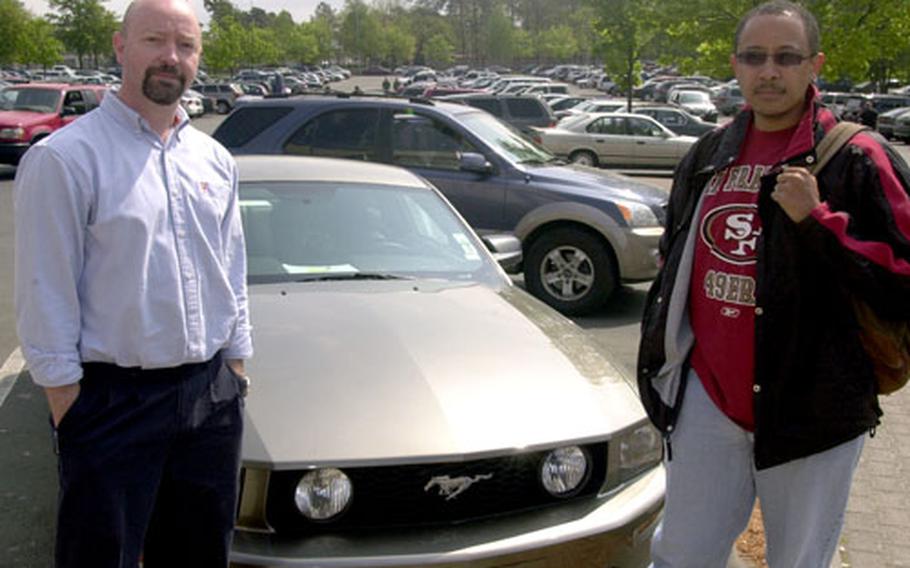 RAMSTEIN AIR BASE, Germany &#8212; She&#8217;s a modern-day beauty whose classic features instantly mark her as a descendant of that mother of all muscle cars.

People stop and stare, but for all the wrong reasons.

He&#8217;s even created a Web site: www.plzbuymylemon.com, part of Sawyer&#8217;s get-even campaign after more than a year of frustration with a car he loves to hate.

Tech Sgt. Robert Williams&#8217; yellow Mustang, a 2005 GT, sits 50 feet across the parking lot. It has the same problem as Sawyer&#8217;s car: Their owners often have a difficult time pumping gas into the fuel tanks.

About half the time, the owners say, the tank stops taking gas once it&#8217;s about half full. When the weather is cold, refueling shutdowns happen with nearly every gas-up. When it&#8217;s warm, the problem nearly goes away.

Jennie Kidder, an administrative assistant for Stars and Stripes in Darmstadt, said her deployed husband, Staff Sgt. Jeremy Gaithe, has never filled up their car because so many cars would be waiting behind him.

Sawyer, Kidder and Williams are not the only fed-up &#8217;Stang owners. Stars and Stripes interviewed, or heard from, six owners, who all reported the same problem.

Since the 2005 introduction of the retro Mustang, the car has consistently sold out 150,000 car runs worldwide, according to media reports and information from Ford. How many of those cars are affected is not clear.

During an April 4 meeting, Sawyer said, Ford&#8217;s head engineer in Germany and a technician from the car sales told him 208 vehicles sold at exchanges in Europe are affected, though only four still have problems.

The issue has turned particularly acrimonious between Sawyer and Car Sales officials. Company officials sent him an e-mail earlier this year, asking him to move his car away from their business, Sawyer said. &#8220;But I checked with legal, and I have every right to park it there,&#8221; he said.

In an e-mail Sawyer posted on his Web site, Car Sales official R. A. Enstone reminds Sawyer that the car had no refueling problems when officials inspected it on April 4.

Enstone declined to address Sawyer&#8217;s claim in an interview. But other company officials told Stars and Stripes they&#8217;ve done all they could to try to solve what they say is a problem limited to seven cars in Europe.

It&#8217;s easy to pick on his company because it&#8217;s on base, said James Black, vice president of legal and business affairs for Exchange New Car Sales, a private company based on Long Island, N.Y. &#8220;But we&#8217;ve worked with [customers], changing the tanks and whatever we could do. We bent over backward.&#8221;

Black and Teddy Rosaya, manager of government/manufacturer relations, added that they don&#8217;t see Ford issuing a recall because no Mustang owner has been able to repeat their problem in their presence.

Ford officials are aware of the problem but have no final fix, said Kristen Kinley, a spokeswoman for the automaker.

So far, their research shows a number of factors may contribute to the problem including nozzles that vary station by station, as well as fuel flow rates and pressure at the pump.

Because the problem seems limited to Europe, the company is still researching the issue, but there is no recall, Kinley said.

In two technical service bulletins, Ford advised dealer repair technicians that 2005 and 2006 Mustangs fuel tanks may experience premature fuel shutoff at half-full, depending on a variety of conditions.

Even though the tank replacement is covered under warranty, &#8220;more than occasionally&#8221; doesn&#8217;t cut it, Sawyer and Williams said.

Other Mustang owners have offered a huge variety of remedies, say the three.

One Mustang owner advised him to find gas stations on hills, with the incline seeming to help persuade the tank to accept the gas, Sawyer said. &#8220;It&#8217;s amazing how many people love (the Mustangs) so much, they&#8217;re willing to do that.&#8221;

The best outcome is that Ford gives them different cars, but no one interviewed believes this will happen without an expensive court battle. If her husband were home, they might pursue the issue, Kidder said. Replacing the cars would be &#8220;chump change for the company,&#8221; she said.