Legendary King and His Court reign on Far East bases 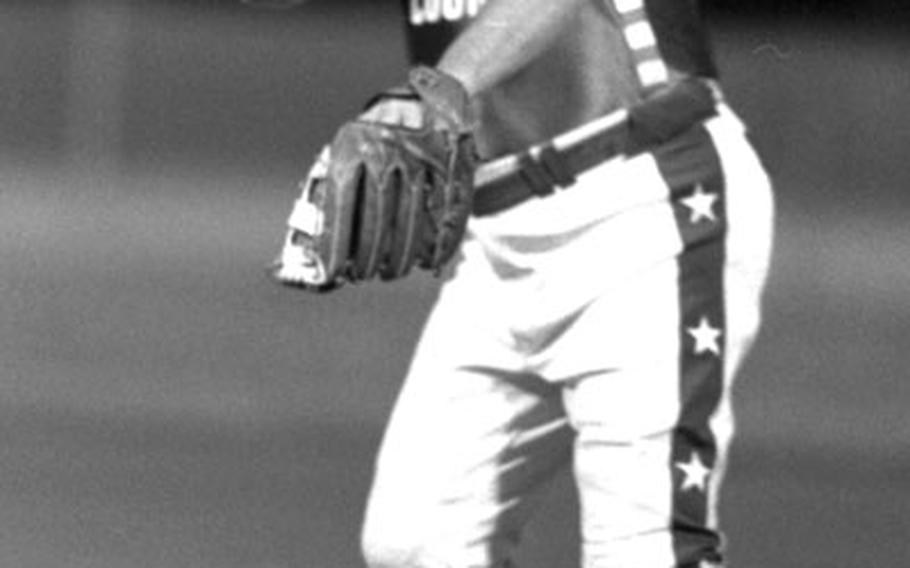 Buy Photo
Eddie Feigner winds up during a game at Camp Zama, Japan, in May, 1989. (R.J. Oriez/Stars and Stripes)

Buy Photo
Eddie Feigner winds up during a game at Camp Zama, Japan, in May, 1989. (R.J. Oriez/Stars and Stripes) 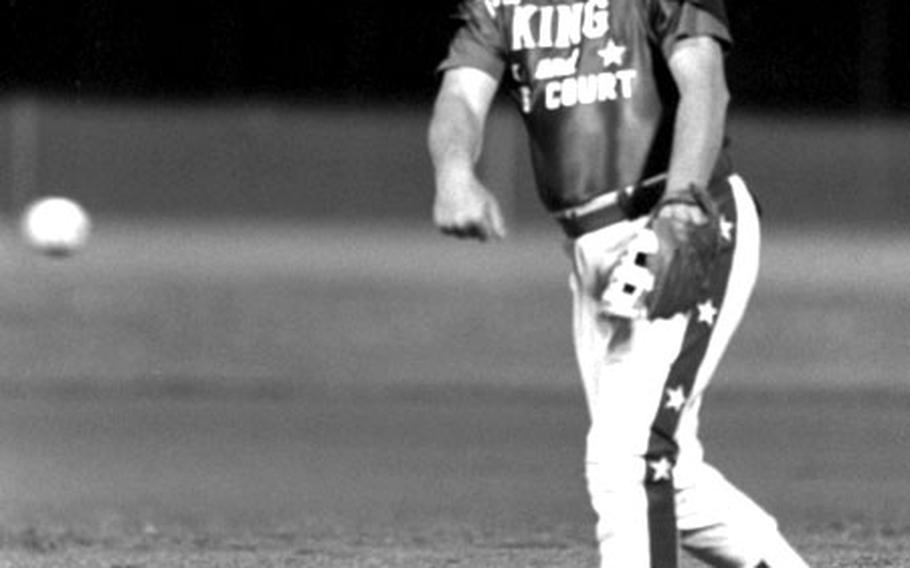 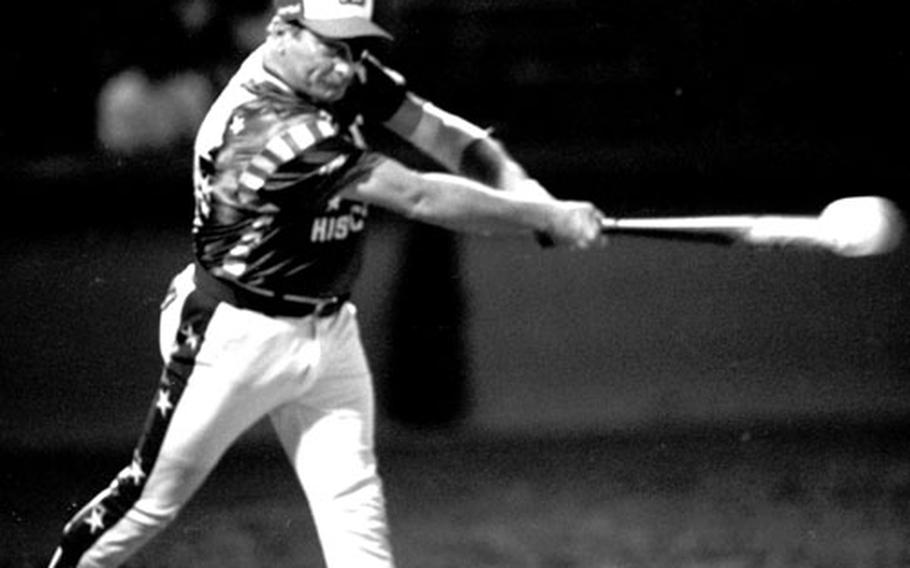 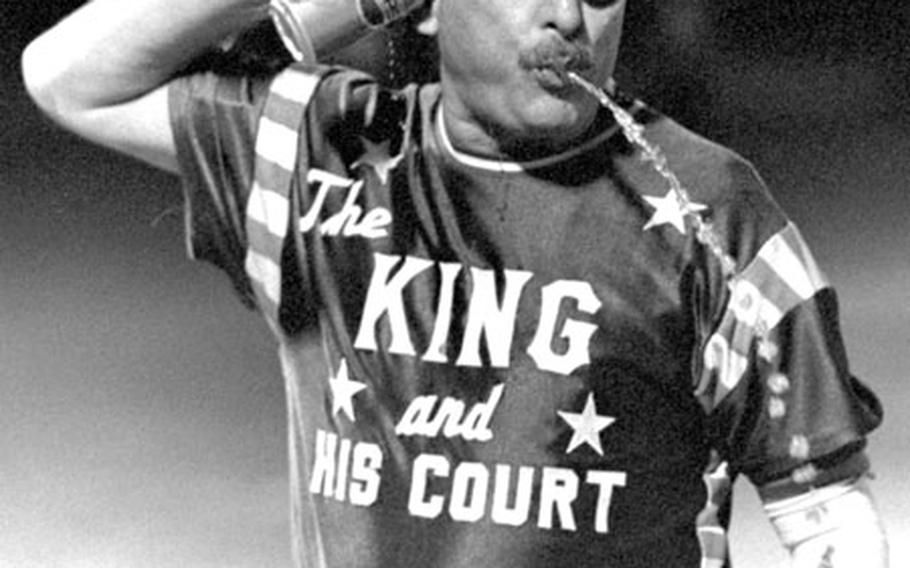 "Merrick? Oh yeah, Eisenhower Park. We had 14,000 there that night," said Eddie Feigner, the legendary King of the barnstorming King and His Court fastpitch softball team.

Into that steel trap memory delves Feigner, 65, a fastpitch softball trouper for some 44 years. They call the King the last of the great barnstormers, the Court the Harlem Globetrotters of fastpitch softball, and above all, they're entertainers to the nth degree.

A world traveler is he. Marco Polo would have been jealous.

HE AND his four-player team have donned their blue and red star-spangled uniforms 225 times a year for more than 18 million fans, traveling almost 4 million miles to 86 countries, 55 in which they've played actual games and the other 31 in which they've demonstrated fastpitch skill, specifically Feigner's mystical mound mastery.

Feigner has performed for U.S. troops during the Berlin Airlift, pitched in full view of Soviet guardsmen in Red Square, pitched against a Cuban team in 1952, featuring a hot major-league prospect, Fidel Castro, who would shun baseball and lead his country through a revolution and retain power 37 years later.

He's toed the same athletic fields as the legendary Jim Thorpe, traipsed through Tibet and rubbed elbows with the Dalai Lama.

He's battled the best batters the major leagues have to offer, striking out Willie Mays, Brooks Robinson, Harmon Killebrew, Willie McCovey, Maury Wills and Roberto Clemente, consecutively, in two separate innings with the bases loaded, in an exhibition between Hollywood celebrities and slugging stars at Dodger Stadium in 1977.

HE HAS carried over the years more than 30 players at one time or another in his troupe, including three former major leaguers.

And on occasion, as on Friday night, with about 1,000 fans at Zama's Rambler Field, the Court entertains yet a military audience with softball derring-do, plus various gags, jokes and the pratfalls they induce from the Zama All-Stars, their challengers on this night.

"Hey Eddie," calls Booth after reaching second on a double. "We need some runs against this team. I think I'll steal third."

With West, the Max Patkin of the team, a patch covering his left eye which he lost to cancer two years ago, motioning Booth to keep quiet, Feigner answers, "I dunno. Have you seen the (Zama) catcher throw?"

"YEAH, THAT'S why I'm gonna steal," retorts Booth, to the delight of the crowd.

Later, Booth, who was recruited by Feigner out of the Army at Schofield Barracks, Hawaii, when West had his eye removed, hammers a home run, to the oohs and ahs of the crowd. Prooyen, a six-time national champion whom Feigner calls the "best pitcher at his age (25) today," later pitches an inning or two.

And, of course, Feigner later pitches blindfolded, from second base and gives a clinic on the differences between fastpitch and slowpitch, the latter for which he professes no love.

Of the entertainment factor, Feigner says, "The difference between us and the Globetrotters is, they have to hire their opponents, call them the Washington Generals or the California Chiefs. We have everybody falling all over themselves wanting to play us, we've struck out Willie Mays and Ted Williams, for 20 years the word is out, nobody can beat us.

(But) we're part sport and part vaudevillian," Feigner insists, adding that written into their show is a myriad of laughs that never end as each inning passes. "We show off how good we are, but don't flaunt it or embarrass the home team," he said.

SUCH IT has been the last six weeks for the Court, which has toured Hawaii, Taiwan, and Korea and Japan at the behest of 8th U.S. Army sports and recreation services outlets at Camp Zama and nearby Yokosuka Naval Base.

For Feigner, it would have been a career in pro baseball, with the New York Yankees, had it not been for Uncle Sam calling in World War II. He became a Marine, serving aboard aircraft carriers such as the Wasp and Hornet, much smaller than the Midway &mdash; considered a small carrier &mdash; aboard which Feigner performed at Yokosuka last week. He left the military in 1944.

The decline of fastpitch, Feigner says, began shortly after he left the service.

"FASTPITCH IS a lost art &mdash; irretrievable in our generation. The rottenest thing to happen to softball was moving back the mound from 43 to 46 feet" in 1949, Feigner said, adding it was done because a few pitchers tended to dominate batters from the closer distance.

"I told ASA (Amateur Softball Association) it was a great game at 43 feet &mdash; you just killed a great game.

"Now every pitcher has to be a big, strong pitcher. Today, there are no great pitchers left out there. Kids who are 10 or 11 years old, they click on the boob tube and say why play fastpitch when there's no pro league, you can't get a scholarship offer for it, and I can play baseball, football, basketball and make good money at it?

"Almost all the good pitchers the last 20 years came from Canada or New Zealand; that kept ASA alive the last 10 or 15 years. Now they're all in their 40s."

The Olympics feature baseball as a demonstration sport, but won't add fastpitch since "the East Bloc doesn't play it; they're trying hard just to play baseball," Feigner said. "And nobody in their right mind would put slowpitch in the Olympics."

Thus, is Feigner, with a year or two left in his own career, the last of the great fastpitch showmen? Will King and His Court die when he retires?

Hyperextending his knee in a gopher hole in 1972 didn't help; it prevents him to this day from getting top speed on his fastball.

Yet, "It's like Bob Feller said: `I can still throw as hard as I ever did. It just doesn't go as fast,' " Feigner says.

"I'm still the best pitcher in the world today, baseball or softball; I just don't have the blinding speed any more. People still want to see Williams bat, Palmer golf; there's the charisma there. I'm still the biggest thing in softball."

HE HAS a book planned and a movie scripted, but there's no ending to either, yet; thus, they're both on the shelf. "I don't know who'll play Eddie Feigner," he said.

He does want one more world tour before he calls it quits &mdash; "It will probably be my last time. One of these years, it will be," he said.

Of who might take it over, such as his son, Eddie Jr., by first marriage &mdash; he has been married three times &mdash; Feigner says, "In sports, they say they'll never replace so-and-so. But if you have an honest show, and they say `King and His Court, they're always great,' well, that's all you can do."