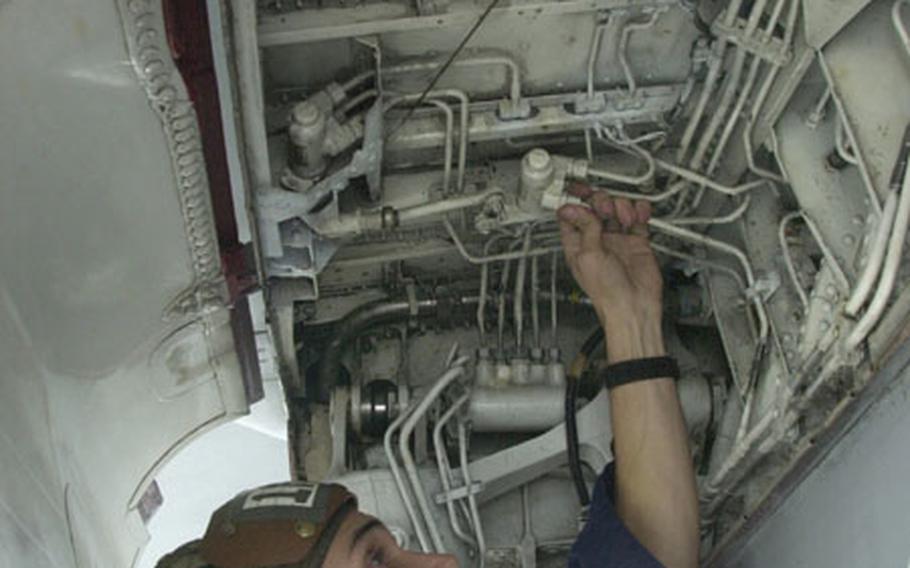 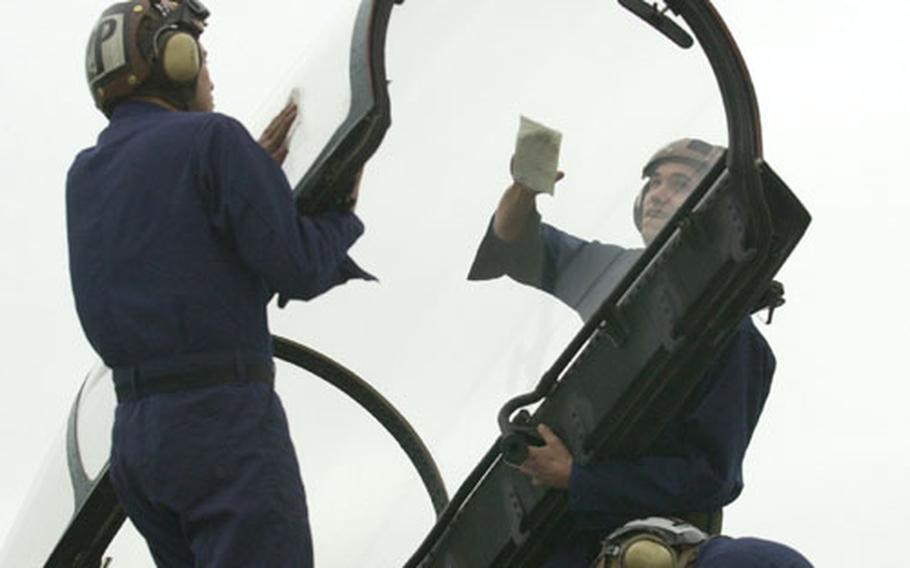 Airman Joey Zirnheld, let, and Airman Michael McDonagh wipe down the cockpit window as Airman Ashe Bridges, below, conducts final checks in the cockpit of an F-14 before its departure from Naval Air Facility Atsugi, Japan. (Jim Schulz / S&S) (The following correction to this story was posted October 1: A September 26 story incorrectly reported the number of jet squadrons assigned to the USS Kitty Hawk and Carrier Air Wing 5. There are three F-18 Hornet squadrons assigned: VFA-195, the Dambusters; VFA-192, the Golden Dragons; and VFA-27, the Maces. F-14 squadron VF-154 left for a new duty station last week and the Navy has not announced its replacement.)

ATSUGI NAVAL AIR FACILITY, Japan &#8212; The jetfighters made famous by Tom Cruise in the movie &#8220;Top Gun&#8221; flew into their last overseas&#8217; horizon Wednesday, leaving behind Japan and their place on the USS Kitty Hawk.

Squadron VF-154, part of the air wing, was one of a handful of F-14 Tomcat squadrons left in the Navy.

Wednesday, the planes departed and the squadron began packing up for a new duty station in Lemoore, Calif. The move affects about 200 sailors and their families. Another 30 or so will be reassigned to other squadrons in the region, Driscoll said.

The Navy has not announced what squadron or type of jet will replace VF-154 in the air wing, which also includes two squadrons of F-18 Hornets.

VF-154, called the Black Knights, has flown the skies of the Pacific for 12 years and participated in combat missions in Grenada, Lebanon, Desert Storm and Operation Iraqi Freedom.

In Iraq, the squadron flew more than 300 sorties and outperformed all other aircraft from every U.S. service, Driscoll said. &#8220;The F-14 has done a great job for the United States Navy.&#8221;

The F-14 has been one of the Navy&#8217;s most memorable fighters for the past three decades. But its mission evolved from an air superiority fighter to that of a strike fighter, Driscoll said.

The Navy is phasing it out in favor of the F-18 Hornet and its modified version the Super Hornet.

The squadron&#8217;s move means a quick permanent change of station for several hundred Atsugi residents. The move will be easier, though, because the group is going together, said Elizabeth Waters, wife of Cmdr. Doug Waters, commander of VF-154.

The squadron will transition to an F-18 squadron at Lemoore Naval Air Facility and the pilots and radio intercept operators like Waters, will learn to fly F-18s.

Elizabeth Waters said it will be tough for her husband to bid the Tomcat farewell after so many years.

Those who know it say the F-14 represents a different era in war fighting. The F-14 was designed for mid-air fights

The aging Tomcats are costly to maintain and are older than most of the sailors in the squadron.

The squadron began in 1946 with the creation of VFB-718. They flew Hellcats and Corsairs from their base at Naval Air Station Floyd Bennet in Brooklyn, New York.

After a few redesignations, the squadron became VF-154 in 1953 while embarked on the USS Princeton in San Francisco.

In 1957, the squadron adopted the name &#8220;Black Knights,&#8221; symbolic of the fight for freedom and protection for those unable to defend themselves. It joined Carrier Air Wing 5 in 1991 until Wednesday, when the 11 jets took off for Naval Air Station Lemoore, Calif.

As a strike fighter, the Tomcat is capable of deploying an assortment of air-to-ground ordnance (MK-80 series GP bombs, LGBs and JDAM) in various configurations, while simultaneously carrying the AIM-7, AIM-9 and AIM-54 air-to-air missiles.