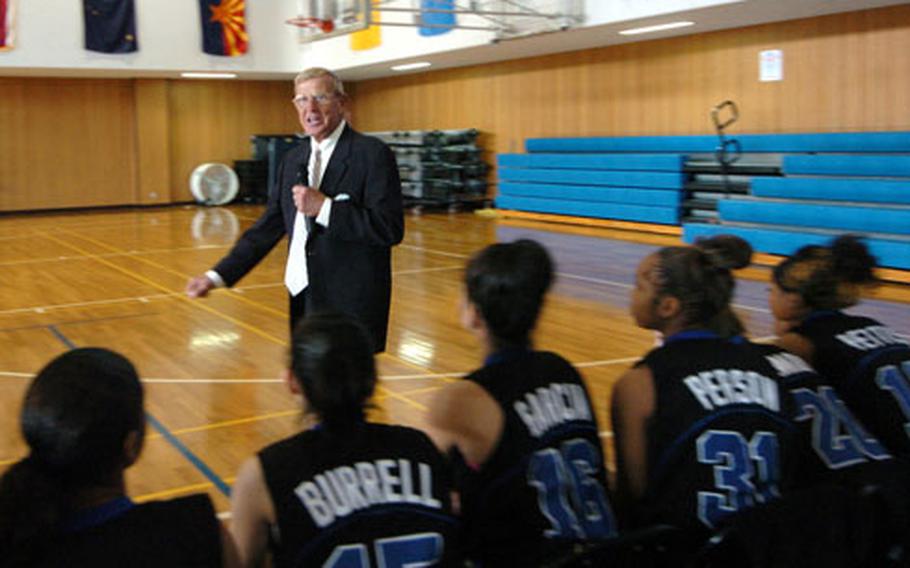 CAMP ZAMA, Japan &#8212; It&#8217;s not every day that servicemembers bring footballs and helmets along to military training sessions.

Lou Holtz, best known for his stint as coach of Notre Dame, took time during a football promotional visit to Japan to speak to Camp Zama troops Thursday morning. The visit coincided with the base&#8217;s weekly leadership training for noncommissioned officers.

In one instance, the coach told a story of a man who asked if people ever told him he looked like Lou Holtz, to which the coach said, "I get that all the time."

But the weightier moments came from the coach sharing his beliefs about the kinds of practices that bring success.

Holtz said a person can achieve success by always trying to do the right thing and by doing their best in everything they do.

He also referred to the Rev. Martin Luther King Jr. in emphasizing the importance of having a dream.

"Dreaming makes things happen. It&#8217;s where it all starts," said the 72-year-old who led six different collegiate programs. "Have a dream of things you want to accomplish. When I learned to have dreams is when I started succeeding."

Maj. Alfonso Rodriguez stuck around after Holtz&#8217;s speech to get a football signed for his grandmother, a big Notre Dame fan who lives in New Mexico. Rodriguez said the coach was inspiring.

"He emphasizes to believe in yourself, always keep striving and growing as a person. And once you do that, your leaders will react and your soldiers will follow you better," he said. "Coach Holtz took a college program that started at zero and he made it, not by words but by actions. And what he did there you can use in your own life."

Holtz also visited the Yano Gym and shared many of the same experiences with teenage athletes on base to compete in the 2009 Far East Girls Basketball Tournament.

Holtz, who was in the ROTC program in college, said his philosophy of success is a natural fit for military families.