Legally-blind manager has vision for commissaries 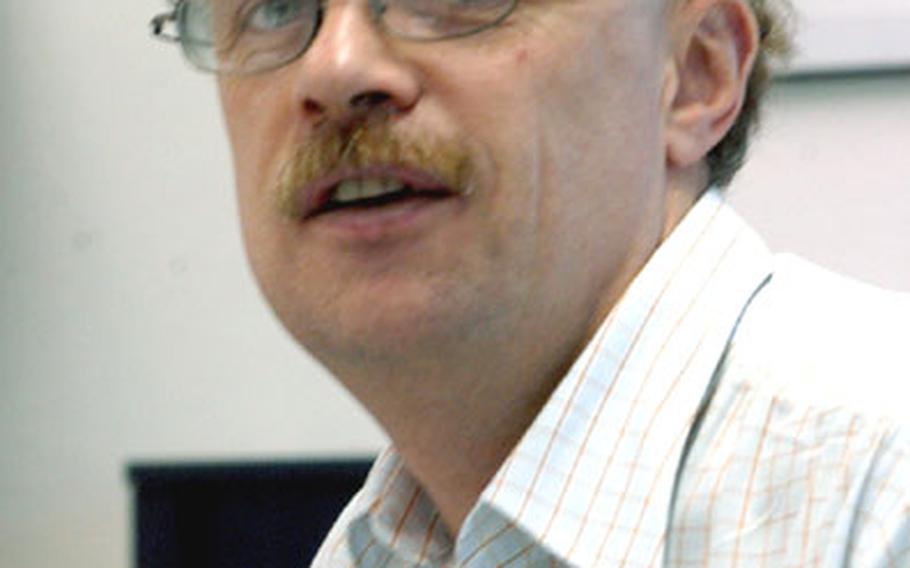 Bradley Flagler, traffic manager for the Defense Commissary Agency, Europe, has excelled at his job despite a degenerative disease that has robbed him of his eyesight. (Kevin Dougherty / S&S)

From the produce section to where popsicles chill, the medley of colors is really overwhelming, a sensory overload if you will, providing a person takes the time to notice.

Bradley Flagler, traffic manager for the Defense Commissary Agency Europe, falls short on that front, though through no fault of his own. A main cog in the overall operation, Flagler is legally blind. So the man who helps bring color to the commissaries can&#8217;t view the bouquet of products.

Keeping store shelves stocked &#8220;requires tight traffic management,&#8221; said Arthur Eschenbach, chief of the central distribution center in Germersheim. &#8220;This is a business where the train never stops, and at the center of it is Mr. Flagler and his group.&#8221;

Flagler and his 15-member staff are responsible for regulating the flow of goods to nearly 60 commissaries stretching from England to Egypt.

Commissary goods are also sent to troops in Iraq and Kuwait.

Much of the merchandise that arrives from the United States is shipped across the Atlantic. It then travels by barge from northern Germany down the Rhein River to the German port at Germersheim.

While some goods are flown to remote locations, such as Cairo, Egypt, much of it moves overland to U.S. military bases. On average, about 650 shipments leave the depot each month, and choreographing it all are Flagler and his staff.

He keeps the lights off and the shades drawn to minimize the strain on his eyes. His left eye is sensitive to light, while the right affords him limited vision, about 2 percent.

Flagler, 44, has retinitis pigmentosa, a degenerative disease that afflicts the photoreceptor cells in the retina. These cells capture and process light, which enable people to see, according to the Foundation Fighting Blindness.

All of this was foreign to Flagler until a brother was diagnosed with the disease in the early 1980s. The New York native was tested afterward and doctors discovered that he, too, had the condition. At the time, Flagler was a soldier serving as a mechanic in Mannheim, Germany. The Army shifted him into the transportation field, though he didn&#8217;t begin to show symptoms of the disease until 1987. He was medically retired from the Army in 1993.

Humor helps Flagler deal with his condition, which he doesn&#8217;t exploit for personal or professional gain, co-workers said. Flagler answers his own e-mails and uses a special device that audibly reads incoming messages.

He takes a bus to work and moves about his spartan office with ease.

&#8220;There is nothing about him that represents blindness,&#8221; said Eric Drummond, a traffic management specialist.

And yet there are a few telltale signs: the collapsible white cane, a subtle tap of a wall or desk to verify his course, his heightened sense of hearing.

But above all else, Flagler just wants to be judged for who he is as a person, his entire being. In his mind&#8217;s eye he can still see the sunrise, a bowl of apples or his favorite color &#8212; blue.

Although he has been recognized for his efforts by the Department of Defense and other organizations, a visitor to his office won&#8217;t see a wall covered with plaques and certificates. Those stay at home. About his only flirtation with the life he left behind is a framed picture of a 1970 Chevelle Super Sport, similar to the one he bought when he was a teen.

Still, he firmly believes he has a lot to offer the U.S. military community overseas.