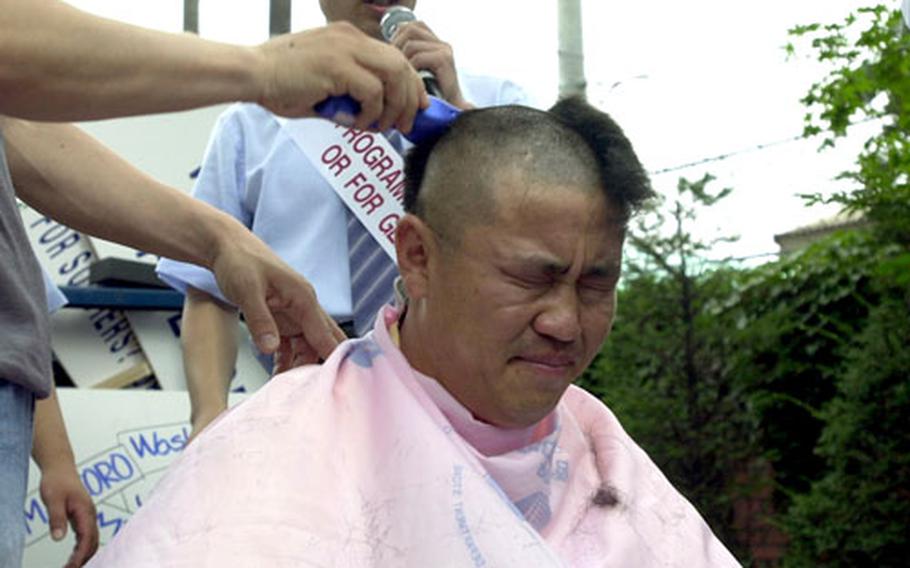 Lim Jong-han, a property owner, winces as other demonstrators protesting a new Army housing program shave his head Tuesday outside the gates of Yongsan Garrison. More than 600 landlords and real estate agents protested the program, which will give landlords a deposit rather than monthly rent, driving down rental profits. (Jeremy Kirk / S&S)

Lawyers found the basic premise of the Housing Opportunities Made Easy (HOME) program &#8212; mandating use of a single real estate company rather than many independent agencies to find apartments &#8212; violates rules regarding a servicemember&#8217;s housing allowance, said Col. Timothy McNulty, Area II commander. Soldiers cannot be required to enter into an agreement with a company with their entitlement, McNulty said.

The legal opinion represents a victory for landlords and real estate agents who fiercely protested the HOME program. The leader of the protests, Lee Kuen-sik, said Thursday his real estate association is committed to helping reduce rent costs for servicemembers while maintaining the quality the command wants.

Lee said that next week he will present a comprehensive plan to the base on behalf of his group, Yongsan Real Estate Association, outlining new services real estate agents can provide and improve business with the base. McNulty said he has met with Lee a couple of times to work on housing issues.

&#8220;I received a commitment from him that he wanted to participate and work with his realtors to work on reducing the rent payments that we are paying now, which has been a sticking point and one of the original issues,&#8221; McNulty said.

Lee and hundreds of real estate agents and landlords staged a large protest outside Yongsan Garrison on July 20. They opposed the military&#8217;s selection of a single real estate company under a no-bid contract, saying it was illegal and claiming it would result in lower-quality apartments for servicemembers.

The issue was so contentious, a base housing official reportedly had his off-post electricity turned off as suspected retribution. Also, three deposits for soldiers who were at the end of their leases were not returned from landlords recently &#8212; but McNulty said after talks with Lee, the deposits were returned.

The HOME program would have radically changed how the U.S. military pays for apartments and would have taken power away from local real estate agents in negotiating rental contracts. It also would have reduced landlords&#8217; profits by eliminating large monthly rent payments.

Under HOME, the military would have paid no monthly rent and switched to a Korean-style deposit system called cheonsae. Landlords are given a deposit, and they make money by investing the deposit through the term of the lease. The full deposit must be returned to the tenant.

The HOME program modified the cheonsae system by using a single property management company, Korea Regional Property Management (KRPM) Inc. KRPM would arrange for a bank to loan the deposit to the property owner and also administer the lease.

The U.S. military would pay the deposit interest, around 6 percent, which would come from a soldier&#8217;s housing allowance. The program was expected to save around $25 million annually.

But McNulty said lawyers found it wasn&#8217;t legal to make it mandatory for soldiers to use KRPM because they have a right to choose how they spend their entitlement. Under the original plan, all soldiers would have had to use the cheonsae system and select apartments on KRPM&#8217;s Web site.

The new system was to have started in mid-July.

KRPM officials declined to comment, citing ongoing talks with the command. The command is still reviewing how KRPM could do the deposit system concurrent with real estate agents and monthly-rent style agreements, McNulty said. The new system would be voluntary.

Now, the command is focused on opening up the market for more competition, McNulty said. More licensed South Korean real estate agents who meet base requirements will be given passes to come on base and do business, he said.

By increasing competition, prices will go down and quality will increase, he said. The command also is putting renewed emphasis on the Fair Market Value program, which seeks to limit the amount of money the military pays for an apartment based on size, McNulty said.

The priority is for soldiers to get quality apartments and then for the government to save money, McNulty said. Despite protests and recent tension over the new program, McNulty said the discourse has been healthy.