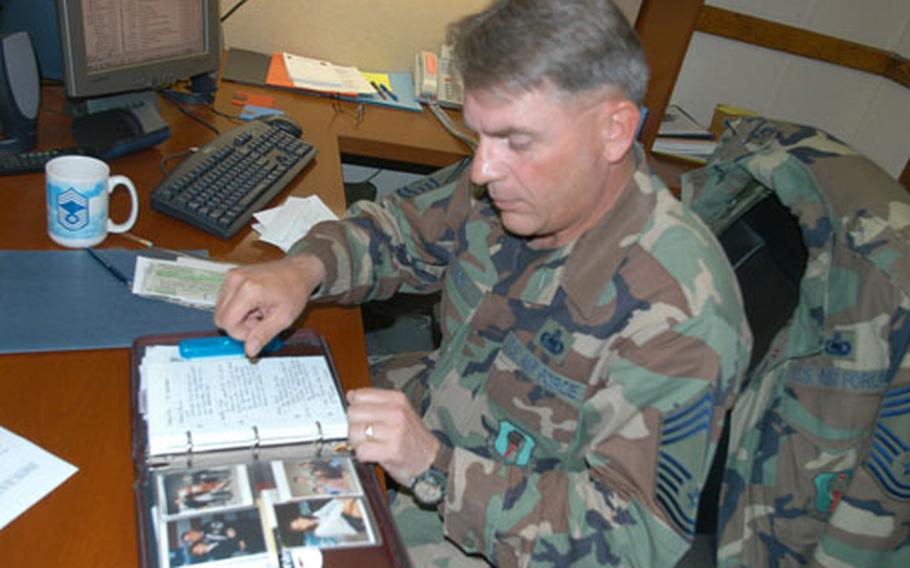 Chief Master Sgt. Brett E. Allison pages through photos of his family. The 35th Operations Group superintendent at Misawa Air Base, Japan, will commission his daughter, Sherry, as an officer into the Air Force on May 15. The Allisons found a legal loophole that allows an enlisted member to administer the officers&#39; commissioning oath. (Jennifer H. Svan / S&S)

Chief Master Sgt. Brett E. Allison pages through photos of his family. The 35th Operations Group superintendent at Misawa Air Base, Japan, will commission his daughter, Sherry, as an officer into the Air Force on May 15. The Allisons found a legal loophole that allows an enlisted member to administer the officers&#39; commissioning oath. (Jennifer H. Svan / S&S) 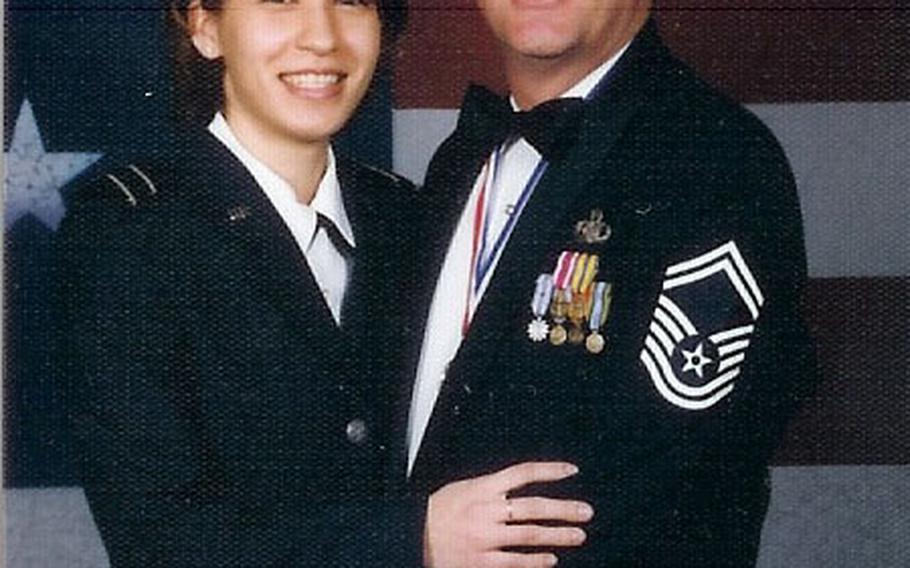 MISAWA AIR BASE, Japan &#8212; A little-known legal loophole is giving an enlisted chief master sergeant here the opportunity to commission his daughter into the Air Force as an officer.

Brett Allison will administer the officer&#8217;s oath to Sherry Lynn Allison in a ceremony May 15 at the University of Wisconsin-Superior.

Sherry Allison is a cadet in the school&#8217;s Air Force Reserve Officer Training Corps. The 21-year-old senior will be commissioned as a second lieutenant with orders to Yokota Air Base, Japan, where she&#8217;ll begin her military career as a contracting officer.

Both father and daughter are amazed that there&#8217;s a way for an enlisted member to swear in an officer.

About two and a half years ago, Brett Allison&#8217;s squadron section commander at Ramstein Air Base, Germany, told him that her father, a retired chief master sergeant, had commissioned her when she graduated from the Air Force Academy.

&#8220;As it was explained to me, under the rule of law, a notary public can administer the oath to commission an officer in the military,&#8221; Brett Allison said. &#8220;This is what started me looking into the possibilities of me doing the same.&#8221;

A notary public is authorized by one&#8217;s state of residence to carry out oaths, among other services.

A Wisconsin resident, Brett Allison downloaded the forms to become a legal notary in that state. It cost him $40 &#8212; $20 for the notary license and another $20 for bonding insurance &#8212; plus 1,000 yen (about $10) to get a notary stamp made. Insurance is required in case a notary signs a document erroneously and is held liable.

The process was simple, but a problem surfaced: The commissioning ceremony was set to take place at the University of Minnesota-Duluth, where Sherry Allison&#8217;s Air Force ROTC detachment is assigned. Though Duluth is a mere two miles from Superior, it&#8217;s across state lines. Brett Allison&#8217;s notary license was good only in Wisconsin.

Sherry Allison&#8217;s detachment commander, however, agreed to hold this year&#8217;s ceremony in Superior so Brett Allison could commission his daughter.

&#8220;I never imagined that I could do it, and to find out that I could, just being her dad and a chief and having your daughter perpetuate the military career, I&#8217;m pretty proud of her,&#8221; Brett Allison said. &#8220;The intent was always to be there to get the first salute, pin her bars on. This is an added bonus to be able to commission her.&#8221;

For Sherry Allison, the May weekend is a big one. After her commissioning ceremony, she&#8217;ll graduate with honors as an international business major. The next day, she gets married.

She said it will be an honor to have her dad by her side when she takes the leap into the next chapter of her life.

For his part, Brett Allison knows what he&#8217;ll tell his daughter at her commissioning, but he&#8217;s not telling just yet.