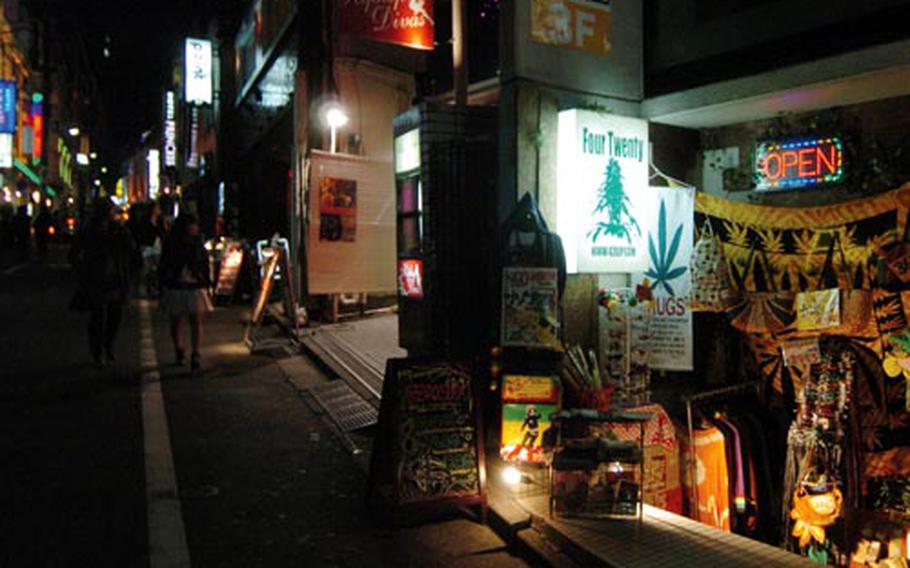 Certain so-called head shops in Tokyo sell substances such as Salvia Divinorum and Spice that are billed as legal marijuana and are banned to service members. (Tim Wightman/Stars and Stripes)

Certain so-called head shops in Tokyo sell substances such as Salvia Divinorum and Spice that are billed as legal marijuana and are banned to service members. (Tim Wightman/Stars and Stripes) 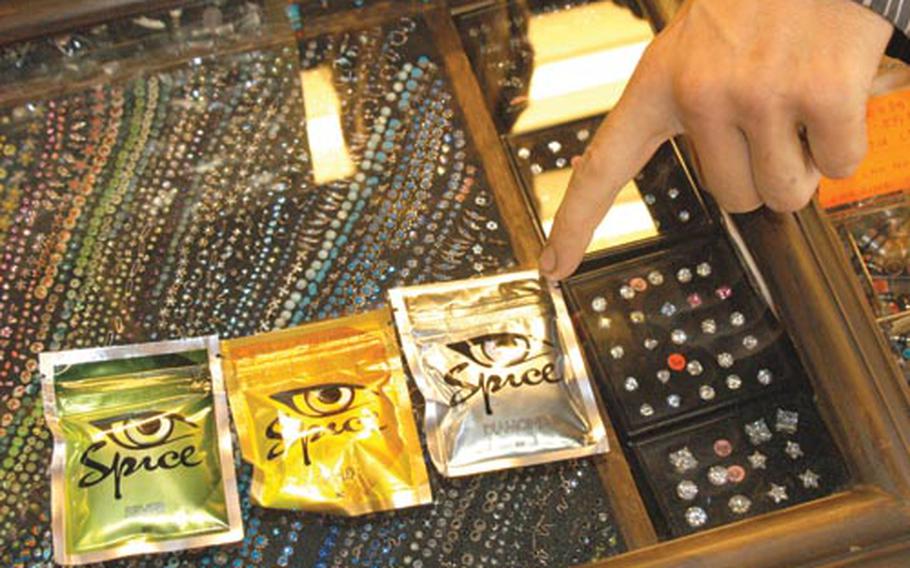 Spice isn’t just a pantry item anymore. In other forms, it’s also a marijuana alternative sold legally as incense or herbal room freshener. Along with another drug called Zohai, it’s typically rolled into cigarettes and smoked. However, the ingredients aren’t always the same, and some varieties contain the synthetic version of the active ingredient found in pot. (Vince Little/Stars and Stripes)

Lurking among the shops, stores and street stands are more dubious vendors. Some operate in the shadows. Others hold signs on the sidewalk touting the availability of their product: "legal drugs."

Although the products they sell aren&#8217;t pot, cocaine and heroin, each is a distinct substitute that can pack just as much punch. Many can produce hallucinogenic effects similar to LSD.

Some of the names are Spice, Foxy Methoxy and Zohai. Another is Salvia divinorum, also known as "Sally D" and "Magic Mint," a widely popular drug among youths that&#8217;s also still legal in most U.S. states.

Prevalent all over mainland Japan and Okinawa, but banned in most places by the U.S. military, the synthetics and designer drugs &#8212; derivatives of other drugs that have been outlawed since the 1960s &#8212; are available in off-base head shops and underground outlets from Sapporo and Shibuya to Ikebukuro and Naha.

How easily can Americans get them?

"As easy as you can buy anything," said special agent Joe Hathaway, a Drug Enforcement Administration liaison officer at the U.S. Embassy in Tokyo.

And when it comes to synthetics, he added, buyers shouldn&#8217;t confuse "legal" on the package with "safe."

A mix of potent ingredients

Along with another drug called Zohai, it&#8217;s typically rolled into cigarettes and smoked. However, the ingredients aren&#8217;t always the same, and some varieties contain the synthetic version of the active ingredient found in pot.

"The quantity and toxicity of the herbs may differ from product to product. As a result, some samples are more potent than others," said Lt. Col. Mark Milam, the 374th Airlift Wing Staff Judge Advocate at Yokota Air Base. The Department of Homeland Security recently found a synthetic substance in Spice believed to be 800 times more potent than marijuana, he said.

Earlier this year, Germany became the fourth nation to ban the substance. It&#8217;s also prohibited in Austria, the Netherlands and Switzerland.

"Sally D," an herb found in Mexico, causes hallucinations, changes in perception, and other psychological and physical effects. In large doses, it can lead to unconsciousness and short-term memory loss.

It&#8217;s so popular in the United States, there are more than 5,000 YouTube videos showing users and their trips into incoherent oblivion, The New York Times reported last year. Some have been viewed half a million times.

"Salvia divinorum is commonly consumed by smoking or chewing the plant, which affects the central nervous system, and in turn causes altered brain functions that produce hallucinogenic effects," Milam said. "It can produce a perception of bright lights, vivid colors and shapes, and object distortion."

Earlier this decade, "magic" mushrooms and GHB, the infamous date-rape drug, were among many stimulants and depressants readily available in Tokyo&#8217;s party districts.

"There was an alphabet soup of drugs sold openly on the streets," Hathaway said. "Now, mushrooms and GHB have been banned. It&#8217;s not as bad now as it was a couple of years ago."

That&#8217;s because a 2006 amendment to Japan&#8217;s Pharmaceutical Affairs Law helped authorities crack down on head shops and sidewalk vendors who sell the drugs, he said. But the "legal highs" can still be found, and new synthetics continue to surface on the streets.

The Army&#8217;s Criminal Investigation Command does not conduct investigations into "legal" drug use, but agents assist local authorities since most of the substances are imported into Japan, said Chris Grey, a CID spokesman at Fort Belvoir, Va.

"CID works with Okinawa authorities concerning the shipment of these type of &#8216;mind-altering&#8217; substances since it is a violation of command policy, and as a courtesy, we pass that information to the respective commands for their action," he said in an e-mail.

A head shop just outside Camp Foster sells legal herbs and plants. The owner, who asked not to be identified, claims he doesn&#8217;t handle Spice there but said he opened the store as part of an effort to decriminalize marijuana in Japan.

His establishment is loaded with smoking paraphernalia and features T-shirts, bracelets, cell phone straps and other goods made of hemp.

Sitting next to the cash register were about half a dozen small zip-locked bags containing what appeared to be mixed herbs. According to the shop owner, the ingredients included Salvia. He brought it to Japan from Washington and cleared a customs inspection, he said. One package goes for about 800 yen.

Like other countries, Japan is constantly scrambling to combat new designer drugs that appear on the scene, according to the Ministry of Health, Labor and Welfare. When a substance makes the controlled drug list, officials said, producers and importers will improvise by slightly changing its molecular structure to get around the regulatory wall.

"In the past 20 years, it has been a cat-and-mouse game" between the government and abusers, he said.

"These drugs are harmful," said Takeshi Yamamoto, compliance officer for the Tokyo Metropolitan Government&#8217;s Pharmaceutical Inspection and Guidance Division. "It causes brain damage. They damage livers and kidneys and have potential of addiction. In some cases, abusers suffer from hallucination, delusion and apathy. They become aggressive, irritant and reckless in other cases."

The easy accessibility remains a problem.

"Compared with conventional illegal drugs, they are cheaper and easy to obtain, because they are sold at stores, street vendors, as well as on Internet," Yamamoto said.

"What is most important is to educate people that the bottom line is not to use a drug that makes them feel high &#8212; whether it is illegal or not," he said.