Leeds: Royal Armouries Museum loaded with weapons of the past 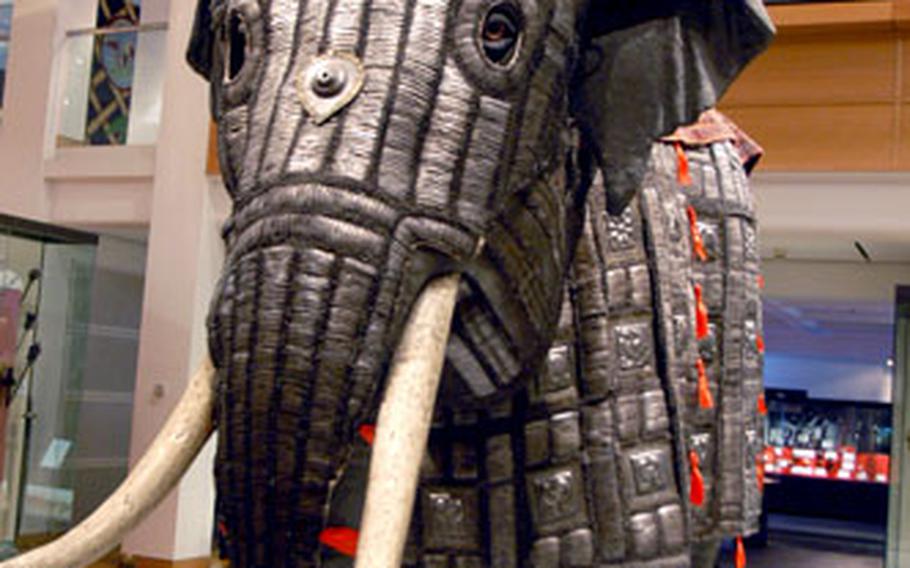 Menacing atop his armored war elephant, a warrior from Central Asia brandishes a spear in the Oriental gallery at the Royal Armouries Museum in Leeds. (Ben Murray / S&S)

Menacing atop his armored war elephant, a warrior from Central Asia brandishes a spear in the Oriental gallery at the Royal Armouries Museum in Leeds. (Ben Murray / S&S) 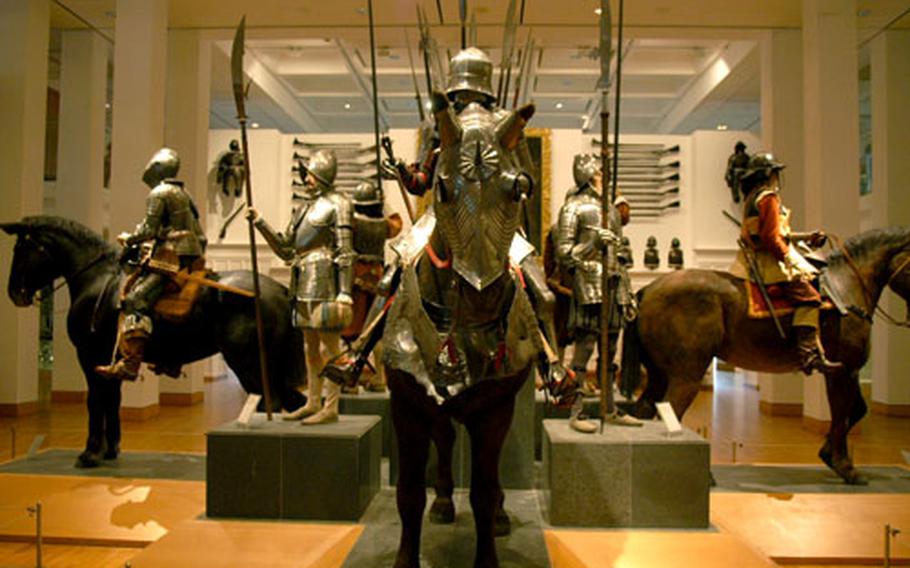 Bristling with armaments, some of the mock knights and soldiers at the museum show their tradecraft. (Ben Murray / S&S) 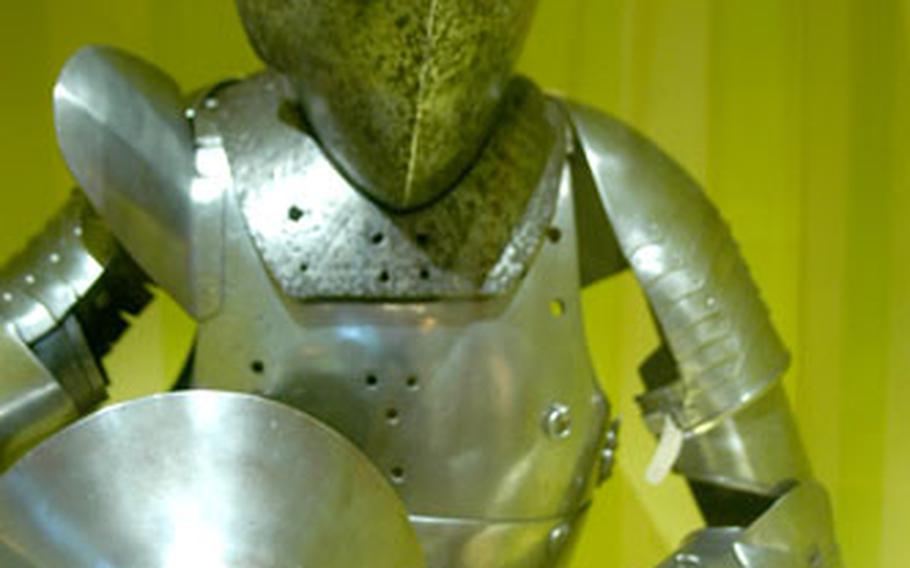 Pointing the stub of a jousting lance at passersby, this relic in the museum’s tournament gallery at the Leeds Royal Armouries invites a head-on collision. (Ben Murray / S&S) 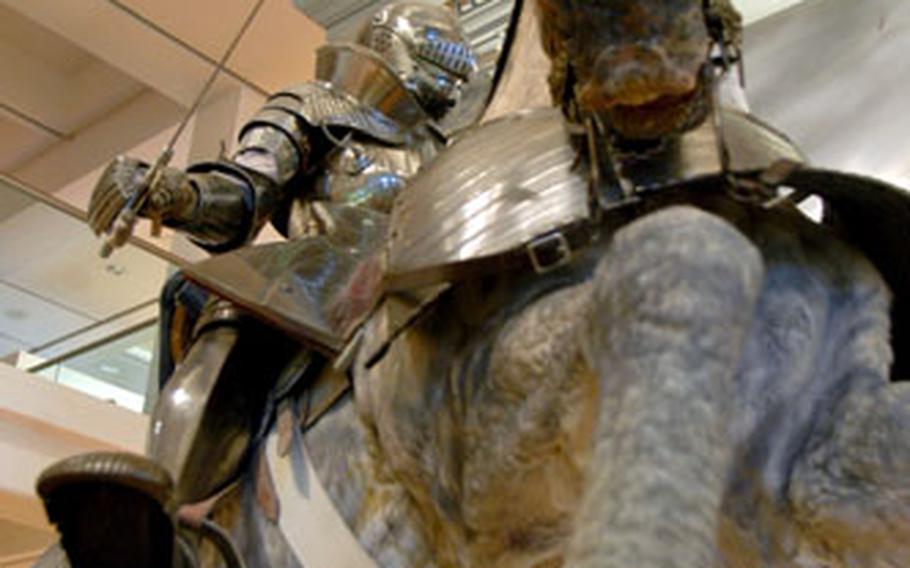 Towering above his opponents, a knight on horseback brandishes a sword in mock battle with peasants. (Ben Murray / S&S) 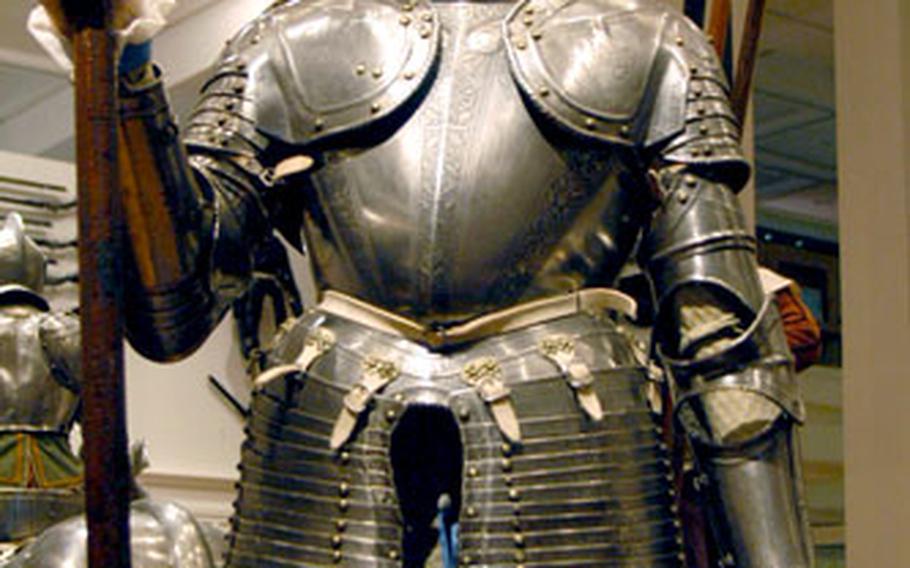 A model of a European foot soldier stands guard in the war gallery. (Ben Murray / S&S)

In the 13th century, Mongol hordes under Genghis Kahn swept down from the Asian steppes and commenced one of the greatest military conquests ever seen.

In just over a generation, they overran China, much of Russia and vast swaths of the Middle East, killing millions and establishing an empire that included what is now Hanoi, Beijing, Moscow, Kabul, Baghdad, all of Turkey and part of Poland.

The arms they used to achieve such domination were relatively simple &mdash; bows, swords, shields. But seen at the Royal Armouries Museum, the weapons can seem almost mystical, given their history.

Indeed, for anyone who is fascinated by arms and armor or who pores over accounts of Viking invasions and Napoleonic campaigns, the cavernous vault of weaponry in downtown Leeds should not be missed.

Home to a collection of tools of war covering thousands of years and several continents, the museum&rsquo;s five floors can require a full day to be appreciated.

Starting at the bottom, one flight up from the shops and educational center, the war gallery and the medieval tournament gallery take up most of a visitor&rsquo;s time at the Armouries.

The two exhibits play on the obvious strength of the museum, its wealth of artifacts from the past 1,000 years of conflict in Europe.

In this section, swords and helmets and suits of armor are in heavy supply, along with intricate models showing how castles were built and later toppled by siege weapons.

In the war wing, the exhibits move quickly into more modern implements, displaying muskets and pistols and the rudiments of naval battles: cutlasses and daggers and the tradecraft of pirates. More ancient epochs are not forgotten, however, as seen in the Macedonian and Roman exhibits. More modern ones are shown, too.

Upstairs, military enthusiasts can gaze at the tools of the Napoleonic wars, the American Civil War, and the many struggles of the British colonies in the 1800s and 1900s. Weapons from 20th-century conflict also are included in the upper war level.

Across the building the two-story hall is decked out to look like the site of a medieval games tournament. Jousters on their horses sit between circular tents, their lances in hand or mounted along the walls.

Upstairs, visitors can then wander through the Oriental wing, where the bows, quivers, spears and shields of the Mongols, the Persians, the Japanese and Huns are on display. Rounding out the exhibits are the self-defense section, home to a collection of pistols, shotguns, knives, rapiers, brass knuckles and police gear, and a wing devoted entirely to hunting.

But for those inclined to think that a suit of armor is a suit of armor, no matter what museum it&rsquo;s in, the real strength of the Armouries is in its efforts to liven up the weapons.

Staged battles involving life-sized mannequins and men on horseback are found throughout the museum, often locked in desperate struggle. A full-sized war elephant stalks one corridor. There are also videos spread around the museum with tutorials on how British longbow regiments fought, how pistol duels really worked and other topics. Lastly, for the strategists, there are computer terminals where visitors can try a hand at commanding forces at famous battles.

The Royal Armouries Museum is in an obscure location in downtown Leeds, and it&rsquo;s easy to get turned around even with the best of directions, but finding it can be worth your while. And admission is free.

To get there from the Menwith Hill area, take the A61 south and join the A64 headed for Leeds city center. Look for the brown signs to the Armouries, bearing left just past the university.

For more directions and a map of the city, follow this link to www.royalarmouries.org.