Giessen, Germany, community librarian Ann Burski — alias the Book Witch — and Hilda the puppet entertain kids at "Stories in the Park," an afternoon of skits and readings sponsored by the Butzbach (Germany) School Age Services and the Giessen library. (Michael Abrams / S&S)

Giessen, Germany, community librarian Ann Burski — alias the Book Witch — and Hilda the puppet entertain kids at "Stories in the Park," an afternoon of skits and readings sponsored by the Butzbach (Germany) School Age Services and the Giessen library. (Michael Abrams / S&S) Kids get a laugh from a skit during "Stories in the Park." Cool, rainy weather moved most of the event into the elementary school gym, instead of on the grassy hill outside where it was supposed to be held. (Michael Abrams / S&S) 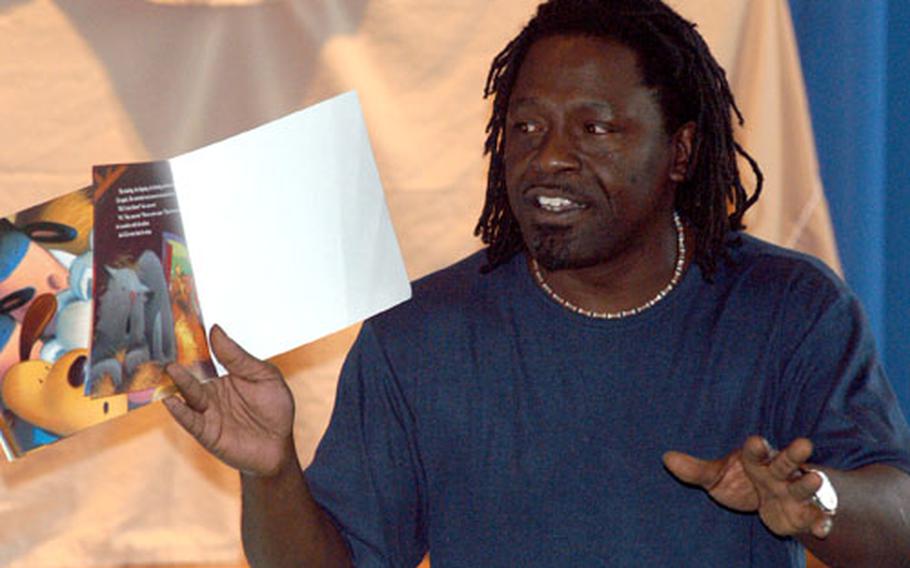 Jerry Bowens of the Giessen child development center reads to the kids at "Stories in the Park." (Michael Abrams / S&S) 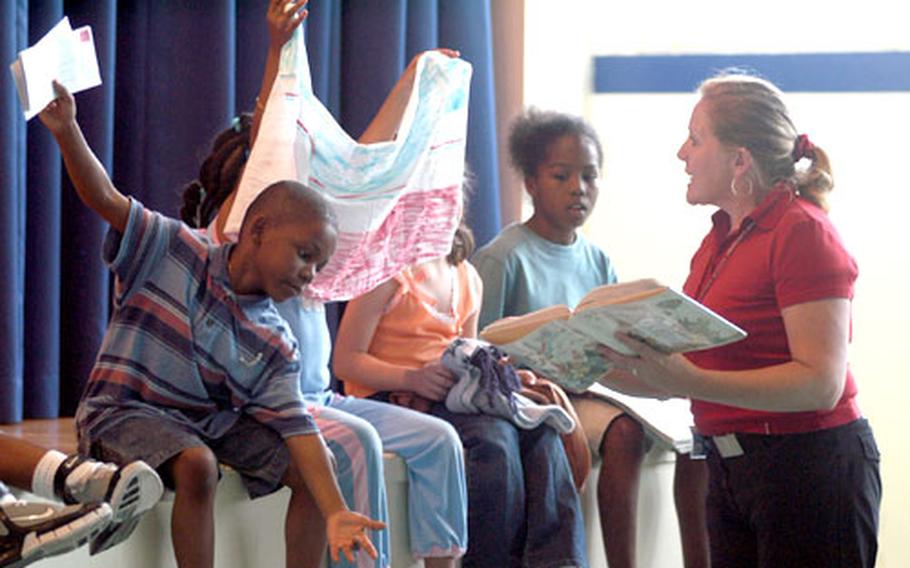 Sallyanne Marshall of the Giessen library puts on a skit with the help of some of the kids at "Stories in the Park." (Michael Abrams / S&S) With the help of some Butzbach kids, University of Maryland&#39;s Randy McNally plants an apple tree near the elementary school at the end of "Stories in the Park." (Michael Abrams / S&S)

BUTZBACH, Germany &#8212; Giving and sharing come in many forms.

At the Butzbach School Age Services building, it was displayed through storytelling, plays and a tree planting this week.

Organizations across the Friedberg, Giessen and Butzbach communities came together to teach children life lessons through the arts.

The libraries, arts and crafts centers, Child Development centers, School Age Services and the Giessen University of Maryland were hosts to the event to help fill one summer day with learning.

Shel Silverstein&#8217;s &#8220;The Giving Tree&#8221; story rounded out the event in the Butzbach SAS gymnasium and then sent about 40 youngsters out into the summer rain to plant an apple tree in honor of the book.

Most of the children said they had never planted a tree. Each lined up and helped McNally fill a hole with dirt in front of the Butzbach SAS.

The &#8220;Giving Tree&#8221; was read in English by Sally Marshall, a library technician in Giessen, and in Spanish by Carola Rohlena, a volunteer from the Giessen community.

Several other stories were read aloud by library technicians. Children and puppet plays also entertained the crowd, and then, during the tree-planting ceremony, balloons were released into the air with postcards attached.

The postcards had a message in German asking that the receivers return them with information about where they landed.

Marshall was hoping the postcards would land at points across Europe and be returned to the children so they could look on a map to see where the postcards ended up, but the rain and weight of the postcards kept them from flying off.

Marshall said she would try to resend the postcards and balloons when the weather cleared up.

Like the &#8220;Giving Tree&#8221; lesson, these children learned that though they gave it their all, sometimes it takes more.